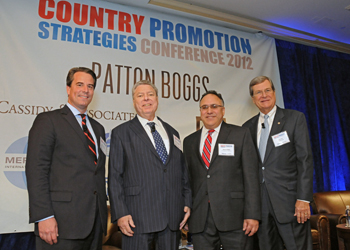 As Republicans and Democrats duke it out over the economy, will there be any energy left for foreign policy? How does an ambassador get heard amid the partisan rancor and gridlock, especially when dozens of colleagues are all trying to do the same thing? How can a foreign government get the (positive) attention of the media — and what should it do when that spotlight turns negative? Should an embassy tweet? What messages appeal to busy congressional staffers, and which ones alienate them? Who’s in and out of the new administration? And how will America’s shifting political landscape impact its economic prospects?

All these questions and many more were openly discussed by those in the know at The Washington Diplomat’s inaugural Country Promotion Strategies Conference, held at the Ritz-Carlton Washington hotel on Nov. 13 — just one week after the dust settled from the contentious U.S. presidential elections.

More than 200 people — including ambassadors and representatives from over 50 embassies — turned out for the all-day event, the first of its kind in D.C. In addition to the city’s diplomatic corps, the CPS Conference brought together members of Congress, senior executives from multinational and foreign corporations, along with industry experts in law, lobbying, public relations, tourism promotion and economic development.

The goal: have high-level policymakers and industry insiders offer post-election strategies for strengthening relations with Washington and cracking the U.S. market — in an off-the-record setting structured to give attendees one-on-one access to key decision-makers.

Speakers included Thomas Hale Boggs Jr. of Patton Boggs, one of the city’s best-known lobbyists; Senator Richard Lugar (R-Ind.), ranking member of the Senate Foreign Relations Committee who was first elected to the Senate in 1976 and whom the New York Times called its “foreign policy conscious”; and former Senate Majority Leader Trent Lott, who won his first congressional seat in 1973.

Guests dined on watercress salad with cabernet-poached pears, grilled beef medallions in bordelaise sauce and vanilla bean crème brûlée with lemon Madeleine cookies as Boggs and Lott offered insights on what to expect in this volatile new political landscape based on their decades of experience.

Guests also received a detailed guidebook with in-depth advice on issues ranging from how to boost U.S. investment and trade to managing a nation’s public profile. In addition, an expansive networking lounge throughout the day offered conference-goers a chance to mingle in between panel discussions. 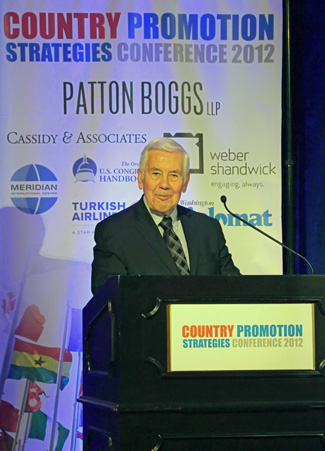 Topics included the evolution of foreign policy and bipartisanship in Congress and implications for the diplomatic community; the fundamentals of government relations; media and crisis management; what to expect from the new administration; how foreign nations can take use polling and research to their benefit; the importance of social media; attracting American tourists; and lobbying 101.

One of the chief responsibilities of any embassy or diplomatic mission in the United States is to promote their nation’s agenda to an American audience, strengthening economic ties and political relations. 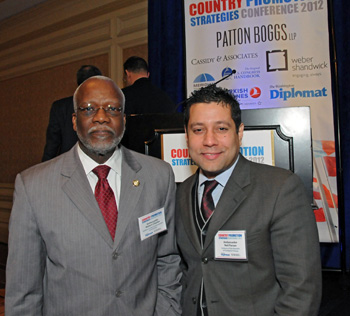 But navigating the maze of government agencies, private sector businesses, NGOs, media outlets and many competing interests in the nation’s capital can be intimidating for the savviest of envoys. They must know how to reach out to top U.S. officials, be able to engage with local media, understand the intricacies of the U.S. regulatory environment, and be intimately familiar with the labyrinth of legislation that grinds its way through Capitol Hill.

After years of listening to diplomats ask how they could break through the Beltway bubble and access American centers of power, Victor Shiblie, publisher of The Washington Diplomat, decided to organize a conference that could help answer their questions.

And based on the overwhelming response, chances are high that the Country Promotion Conference will become an annual tradition.

Among the turnout were more than 20 ambassadors, with envoys from Egypt, Trinidad and Tobago, Iceland, Guyana, Monaco, Haiti, Senegal, Malta, Cyprus and others in attendance. Political counselors, trade officers and other diplomats from embassies spanning the globe — from Azerbaijan, Botswana and Iraq to Finland, New Zealand and Singapore — also came out. Corporate sponsors of the Country Promotion Strategies Conference included Patton Boggs, Weber Shandwick and Cassidy & Associates.