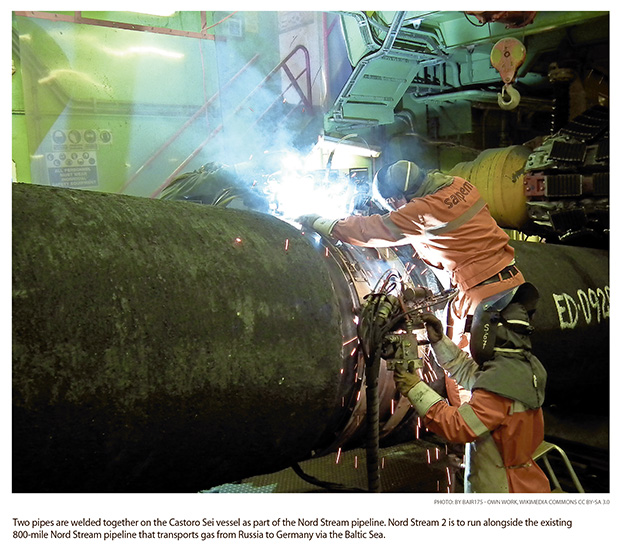 Neither hell nor high water nor Donald Trump will stop Germany from increasing its dependence on Russian natural gas.

Russia already supplies at least 50 percent of Germany’s natural gas and it will supply as much as 80 percent after completion of the controversial Nord Stream 2 pipeline, expected in the fourth quarter of 2019.

Nord Stream 2, which is to run alongside the existing 800-mile Nord Stream pipeline that transports gas from Russia to Germany via the Baltic Sea, is controversial for reasons economic and geopolitical. It bypasses Central and Eastern European nations, depriving them of lucrative transit fees and leaving them vulnerable to gas shutoffs by Moscow. Critics say Nord Stream 2 will also leave the European Union overly reliant on Russia, which provides the bloc with roughly 40 percent of its natural gas imports.

Norway and the Netherlands are Western Europe’s biggest producers of natural gas, but their supplies are running out, while demand for gas is on the rise. Russia, on the other hand, has huge natural gas reserves in Siberia.

“Germany, as far as I’m concerned, is captive to Russia because it’s getting so much of its energy from Russia. So, we’re supposed to protect Germany but they’re getting their energy from Russia,” Trump said on July 11.

On that note, Merkel, who grew up in East Germany, offered a subtle rebuke to Trump’s claim that she is captive to Russia. “I’ve experienced myself a part of Germany controlled by the Soviet Union, and I’m very happy today that we are united in freedom,” she said.

But the EU is far from united on Nord Stream 2. Brussels has said the project goes against the bloc’s goal of diversifying its energy sources. Former President Barack Obama also criticized Nord Stream 2, saying it would make Western Europe too dependent on Russia.

“This doubling of one pipeline from one source, instead of creating multiple routes from multiple sources across that territory, does not appear to enhance Europe’s energy security,” former Deputy Energy Secretary Elizabeth Sherwood-Randall said in March 2016.

Poland, Belarus and Ukraine also oppose Nord Stream 2 because Russian gas pipelines traverse their territories en route to Western Europe and they’re afraid Russia will stop using them after Nord Stream 2 goes online. Russia pays those countries billions of euros per year in transit revenues. Those payments would stop if Russia were to stop using those pipes.

On the flip side, Europe is Russia’s largest gas market, so cutting off supplies would cost Russia large amounts of money at a time when its coffers already have been depleted by Western sanctions and lower oil prices. But Nord Stream 2 could insulate Russia from the economic pain of shutting pipelines in Eastern Europe, leaving countries like Ukraine out in the cold. And the Russians have shown that they are not above using their pipelines as instruments of political coercion.

Gabriel Collins, an expert in international energy and environmental regulation at Rice University, said Russia had disrupted oil and gas supplies to its European neighbors at least 15 times during the past 25 years. “Russia does this to gain leverage over [its] neighbors and advance its strategic priorities,” Collins wrote in a July 2017 paper titled “Russia’s Use of the ‘Energy Weapon’ in Europe.”

Ukraine has gotten the worst of it.

In January 2009, Russia cut off almost all its gas exports to Europe, leaving people across the continent without heat. President Vladimir Putin said he had turned off the tap because Ukraine had been siphoning gas from the pipeline that crosses its territory and not paying for it. Ukraine denied that.

In less than a week between March and April 2014, the Russian energy conglomerate Gazprom raised the price of its gas deliveries to Ukraine from $268.50 per thousand cubic meters to $385.50, then to $485. This happened shortly after Russia invaded Crimea. Gazprom said it did so because Ukraine had not been paying its bills.

“This rapid price increase was suspiciously timed — coming on the heels of Russia’s invasion of Crimea — and transcends the bounds of commercial normalcy,” Collins wrote.

“I think when you’re looking at the Ukrainian position itself, an awful lot of that is also driven by fear of losing the transit rents that come when Russian gas crosses their territory on its way into Central and Western Europe,” Collins said in a phone interview. “You’re talking billions of euros per year worth of transit revenues, and that’s not something that they’re inclined to see go.”

“There are some people you don’t take at their word and I would put President Putin right at the top of that list,” Collins said.

For Germany, the reward of increased gas supplies outweighs the risk of Russia stopping the flow of that gas. 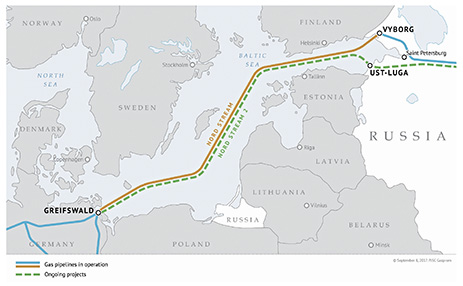 “Germany is going to get all the tariff revenue,” said Amy Jaffe, an energy and environment expert at the Council on Foreign Relations. “They’re going to be the hub where natural gas is going to trade in Europe. You have all these pipelines that end in Germany and then the Germans will be responsible for sending natural gas beyond Germany. They will have hub services, they’ll have the benefit of that to their economy. They can charge other people a fee for sending on the gas, and they’re taking that revenue away from Poland or Belarus or Ukraine, depending on how the thing plays out.”

Ironically, these transit nations’ losses may not only be Germany’s gain, but Western Europe’s as well. With Germany at the helm, Nord Stream 2 could ensure a more stable flow of gas to Europe. That’s because Russia is far less likely to cut off gas supplies to Germany, which it relies on heavily for trade, than it is to shut down pipelines in antagonistic countries such as Ukraine.

In addition, Western European countries have made adjustments to protect themselves from Russia’s duplicity, such as storing reserves of natural gas and developing alternative sources of energy among themselves.

They “have the ability to trade electricity, so maybe the French could sell you nuclear power over a wire that connects to one country or another. And also, you have a lot more renewable energy, which in the end is in competition with Russian gas and electricity,” Jaffe said. “So, Europe has definitely responded, and that response means that if the Germans get cut off, there will be these alternative avenues to get them increased supply to replace what they lost from Russia.”

Trump has offered another alternate solution to Europe’s dependence on Russia for natural gas: He said Europe should become a “massive buyer” of liquefied natural gas, or LNG, from the United States.

That is unlikely. Importing U.S. LNG is almost twice as expensive as getting gas through a pipe from Russia. Gas has to be liquefied, shipped across the Atlantic, then de-liquefied at an LNG receiving terminal. Germany doesn’t have one. In the first quarter of 2017, only 1 percent of Europe’s natural gas receipts came from the United States.

Outside of some environmental objections, however, Nord Stream 2 looks like a done deal. Germany has approved all permits for the project and construction is well underway. U.S. sanctions may be the only way to halt the project. Any such sanctions, however, would widen the rift between the U.S. and its European allies, especially after Trump’s controversial NATO summit where he called Europe a “foe” and repeatedly disparaged Merkel while cozying up to Putin.

At that summit, Trump also overstated Germany’s energy reliance on Russia, saying Germany gets “between 60 to 70 percent of their energy from Russia and a new pipeline.”

Nevertheless, Germany is already the largest buyer of Russian gas, and Nord Stream 2 will significantly increase Western Europe’s energy reliance on Russia at the expense of transit countries in the East. The project “would dramatically change the gas supply map of Europe,” wrote Margarita Assenova, an associate scholar at the Center for European Policy Analysis (CEPA) in the June 2018 report “Europe and Nord Stream 2.”

“For the first time, Gazprom would have direct, unobstructed access for the majority of Russian natural gas exports to lucrative Western markets. By redirecting most of its gas exports to Germany, Russia would be able to bypass Ukraine and most of the Central and Eastern European countries that rely exclusively on Russian gas,” Assenova wrote.

“I would say the president wasn’t 100 percent wrong” when he said Germany was captive to Russia, Jaffe told us. What he should have said is: “How is Germany going to ensure that those three countries [Poland, Belarus and Ukraine] are going to have a secure economic future if Germany takes away their tariff revenue?