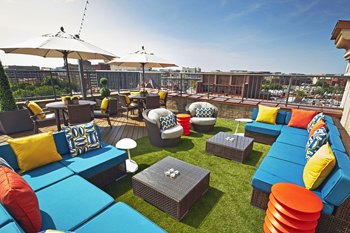 Also See: Reaching for the Stars: Sky-high dreams are common in D.C.

In D.C., the places to be are movin’ on up. For too long, D.C.’s streets have had all the fun. Now it’s the rooftops’ turn. Until recently, most hotels didn’t make use of the space above the top floor, but that’s changing now — and rapidly.

Several hotels are opening their doors this summer with new or revamped rooftop amenities including pools, bars, dining and activities. The Height of Buildings Act, passed in 1899, capped how tall buildings in the District could be (110 feet), mainly to ensure that nothing eclipsed city landmarks (and also because of fire safety concerns over tall buildings). In 1910, that limit was amended to 130 feet. Although that act causes consternation in some ways — such as not being able to build up to make more livable space as D.C.’s population grows — it means many rooftops offer unobstructed views of national treasures.

Still, setting up shop on the top is not simple. For example, hotels must secure a Summer Garden Endorsement from the city government to be able to sell alcohol in a private outdoor space. Also helpful: approval from the applicable Advisory Neighborhood Commission. ANCs examine policies and programs affecting their neighborhoods, including liquor licenses.

To stay competitive in this highly aggressive hotel market, the rooftop is becoming the “it” thing to have, said Kate Gibbs, domestic media relations manager at Destination DC. “It’s becoming an expected amenity: that the street-level excitement is available on the rooftop,” Gibbs said.

Here’s a look at how some hotels are aiming high to shatter the limits of traditional hospitality.

At the recently renovated Embassy Row Hotel, so much happens on the redecorated rooftop that hotel executives felt they needed someone dedicated to the 4,130-square-foot space. They hired the hotel’s first rooftop manager, Maurice Moreno, and reopened the Rooftop, as it’s called, May 6.

“This gives people a point person to be referred to,” Moreno said, whereas before, multiple people shared responsibility for rooftop plans. The Rooftop hosts events Wednesday through Sunday ranging from silent discos to sunrise yoga sessions.

During Support a Cause Wednesdays, patrons can schedule a fundraising happy hour and the hotel donates $1 from every house wine, draft beer and Support a Cause cocktail it sells. Partners have included the local Humane Society and Urban Alliance.

On Thursdays through Sept. 29 from 6:30 to 10 p.m. is Art into Dusk, featuring works by local artists plus drink specials.

Hooky Fridays are for people who don’t want to go back to work after lunch, Moreno said. Signature cocktails — typically $12 to $15 – are half off and day passes, which non-hotel guests can buy for $30 to use the pool, are free from 2 to 6 p.m. When the sun starts to set, Silent Disco revs up.

“We have three deejays who play at the same time, but everybody gets a headphone so you can switch back and forth between the different deejays,” Moreno said. “If you don’t have a headset on, you don’t hear any music.”

Sunrise Yoga is offered Saturday and Sunday mornings from 8 to 9 in partnership with Epic Yoga studio. This is free for hotel guests and $19 for everyone else. 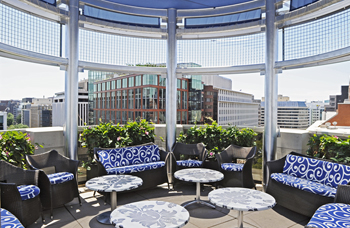 The Beacon Hotel has been making use of its expansive rooftop space for years in the form of Sky-Bar, which overlooks Rhode Island Avenue.

Liquid Brunch and a pool party happen Sundays between 12 and 3 p.m.

Open from May to Oct. 1, the pool area and Dupont Deck offer picturesque views of landmarks such as Dupont Circle, the National Cathedral and the Washington Monument. It was voted “one of the best rooftop pools in America” by USA Today and features a heated swimming pool, grill, bar, daybeds and shaded lounge. The pool opens at 7 a.m. daily. It closes at 10 p.m. on weekdays and 6 p.m. on the weekends, although the Rooftop stays open until 11 p.m.

“We want to see people have a good time and keep them entertained and kind of forget that they’re in a city and transport them to a tropical oasis,” Moreno said, adding that one of the signature cocktails is served in a Thai coconut.

The Beacon Hotel has been making use of its expansive rooftop space for years in the form of Sky-Bar, but every spring it debuts something new, whether it’s furniture, drinks, menus or something else.

“The Washington, D.C., market is wonderfully fickle so [locals] love things that are new on an annual basis, so we try to create a different sense of excitement every year,” said Hector Torres, the hotel’s general manager. 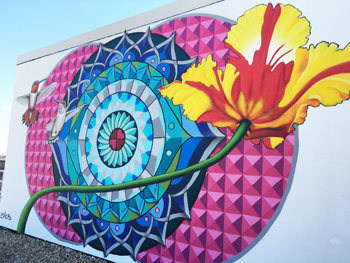 The Beacon Hotel’s Sky-Bar is featuring the work of a local mural artist.

This year’s new draw is a mural by Eric B. Ricks, a native of Liberia who now lives in Silver Spring, Md. His work can be found nationwide and locally at Busboys and Poets, Ben’s Chili Bowl and other popular area spots.

“We recognized there was a wonderful trend in these magnificent murals throughout the city, and there was this article about this artist turning graffiti into an art form,” Torres said of the inspiration to have a mural painted. “I view this mural as an opportunity to support local artists, while presenting our visiting public a visually striking composition that enhances already beautiful views of our city from above.”

Sky-Bar is open to the public in the evenings starting at 5:30 and available as meeting or luncheon space during the day. The hotel counts organizations such as the World Bank among its daytime rooftop customers.

Sky-Bar can hold up to 125 people and opens April 15. It closes Nov. 1, after a blow-out Halloween party to end the season, Torres said. 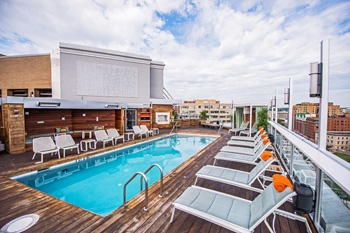 One of Kimpton’s newest properties, Mason & Rook, had its ribbon-cutting last month. The 178-room hotel boasts a rooftop with a pool, grill, firepit, swanky lounge and vistas of the Washington Monument, as well as the bustling 14th Street corridor below.

Soak up the sun poolside while enjoying some inventive cocktails from the team at Radiator, the hotel’s stylish new bar. Among the offerings: Visible Tan Lines, a concoction of Tito’s Handmade Vodka, Chareau Aloe Liqueur, lime and lemon verbena; On Deck, featuring Beefeater Gin, lemon and basil; and the Full Monte, with Montenegro Amaro Liqueur, coconut crème, pineapple and plantation-aged rum. Then relax and cool off with a post-sunbathing spa treatment to cap off the perfect summer day.

The boutique brand also runs the Donovan on 14th Street, long known for its chic rooftop pool lounge. DNV Rooftop (short for Damn Nice View) is home to 1,500 square feet of dramatic poolside event space that overlooks Thomas Circle and 14th Street and can accommodate 100 guests for a cocktail reception. The rooftop pool bar opens to the public at 5 p.m. on weekdays and 7 p.m. on weekends. DNV serves seasonal drinks and dishes from Zentan, the Donovan’s Asian-inspired restaurant below. 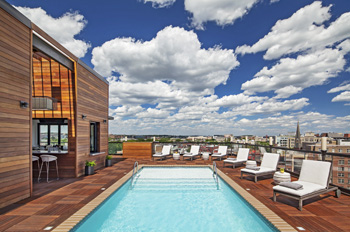 “The original Watergate Hotel had a usable rooftop space — there are photos of [President Jimmy] Carter doing a fundraiser up there — but it was not formally developed,” Cohen said. “That is something we wanted to add from the very beginning. Nowhere in D.C. is there an unobstructed 360-degree panoramic view of the D.C. skyline, the Potomac River and the Georgetown Waterfront. Everyone will remember the first time they see a sunset from our roof.”

To make it happen, Euro Capital Properties worked closely with the U.S. Commission on Fine Arts, which gives advice on design and aesthetics as they affect the dignity of the nation’s capital, and the National Park Service to follow proper protocol in constructing Top of the Gate.

Programming has not been finalized, but Top of the Gate will be available to rent for private events. It will also play host to hotel events such as fitness classes and pop-ups, Cohen added. 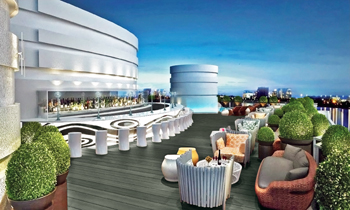 All the restaurants and bars in the hotel are open to the public. Top of the Gate can accommodate up to 350 people and will be open seasonally, although heat lamps will be available for private events as needed in cooler months, Cohen added.

In late April, Rosewood Hotels and Resorts became the new owners of Capella Washington, D.C., in Georgetown. Situated along the C&O Canal, the hotel already had a beautiful rooftop, complete with an indoor-outdoor infinity-style pool, a built-in fireplace and the Rooftop Bar and Lounge. The only other hotel in Georgetown with a rooftop is the Graham.

Under Capella, the rooftop was reserved for guest use only, though some exceptions were made. But Capella never seemed to gain the type of traction one would expect from such a pricey property (rooms went for $600 a night and up); some speculated a lack of event space was to blame. 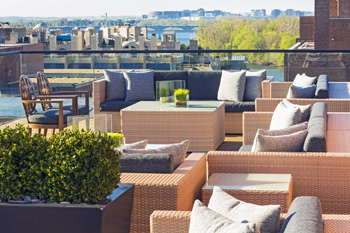 Rosewood Hotels and Resorts is opening up the former Capella’s rooftop lounge to the public.

The upscale Rosewood brand, which was reportedly eager to crack into the D.C. market, quickly announced plans to open the sleek rooftop to the public. It’s also available for rent for events and parties.

“The rooftop’s view of the capital city’s skyline, including the iconic Washington Monument, is truly breathtaking and makes for a stunning backdrop to any special occasion,” said Pascal Forotti, the hotel’s managing director. “There is something particularly appealing about an urban rooftop — it’s very exciting and romantic. The elevation provides a whole new perspective on the city that you don’t really consider when you’re walking around on ground level all day.”

The Rooftop Bar and Lounge offers light bites, artisan cocktails, wines and rare whiskies. It will close for the season on Sept. 30 or in early October, weather permitting.

“Whether you’re dropping in with friends for an after-work cocktail and chef Frank [Ruta]’s famous Grill Room Burger or celebrating a special occasion, the rooftop is an ideal venue for saying ‘cheers’ to the summer season,” Forotti said.

Reaching for the Stars

Sky-high dreams are common in Washington, D.C., and now hotels are sharing them. Rooftop spaces that are not just usable but highly inviting are popping up all over the city, just in time for Fourth of July fireworks displays.

• The Hyatt Place Washington DC/National Mall is a new 12-story, 214-room hotel that has a rooftop bar — CityBar — and wrapped balcony that offers views of Nationals Park, museums and monuments.

• The Hampton Inn & Suites Washington DC-Navy Yard is also brand-new. The 168-room hotel’s rooftop — Top of the Yard Rooftop lounge, a bar with “Natitude,” according to its website — provides views of Nationals Park and the Anacostia River. It’s the only rooftop bar and eatery in the Capitol Riverfront-Ballpark District.

• For the quintessential Washington experience overlooking the White House, the mainstays are POV lounge atop the trendy W hotel and the more refined Hay-Adams, whose Top of the Hay rooftop is available for private events.