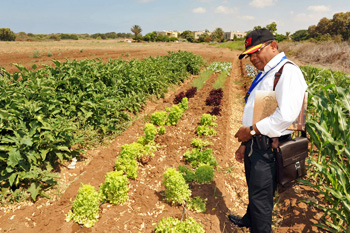 The Washington-based ambassadors of 19 countries — some of them so obscure that most Americans probably never heard of them — recently took a whirlwind, five-day tour of Israel that also included a side trip to Ramallah, provisional capital of the Palestinian Authority.

The unprecedented “fact-finding mission” was organized by the Israel Project, a nonprofit organization opposed to the Palestinian bid for member state recognition at the United Nations. In response, the group launched its own bid to woo small nations ahead of widely anticipated vote at the 193-member U.N. General Assembly, where each country, regardless of size, has an equal voice — and where the numbers generally tend to favor Palestinians over Israel, which is often isolated in the world body.

Timor-Leste Ambassador Constancio Pinto examines a drip-irrigation system at a training center run by Mashav, Israel’s international development program, during a trip that brought the Washington-based ambassadors of 19 nations to Israel ahead of the Palestinian bid for state recognition at the United Nations.

Participating in the trip were ambassadors from small Caribbean, Eastern European and African nations that, with a few exceptions, don’t have embassies in Israel. The jam-packed itinerary was intended to familiarize the envoys with the country as well as the debate over U.N. recognition, and included everything from a helicopter ride over Israel’s border areas to meetings with venture capitalists and a visit to Jerusalem’s Old City.

“Some people think that such a trip is against the Palestinians,” said Jennifer Laszlo Mizrahi, founder and president of the Israel Project. “However, nothing could be further from the truth. We believe strongly that a unilateral move by the Palestinians at the United Nations would deeply harm the interests of the Palestinians and the creation of a Palestinian state. The only way to achieve lasting peace and a two-state solution for two peoples is through direct negotiations between Israel and the Palestinians.”

But the Palestinian Authority countered that after decades of failed negotiations — and more recently, even more dismal prospects under Prime Minister Netanyahu — they had little choice but to turn to the United Nations in light of unabated settlement expansion that is making a two-state solution increasingly unrealistic.

A number of European Union nations — frustrated with the Israeli government’s recalcitrance over settlements and other divisions that have ground peace talks to a halt — agreed. The United States, however, steadfastly maintained that it would veto any statehood moves at the U.N. Security Council, which alone has the legal power to recognize new nations. The Palestinian Authority bucked that veto threat and went ahead with its statehood appeal at the Security Council, although it said it would give the group “some time” to consider the request before taking its case to the U.N. General Assembly.

There, the Palestinians can seek an upgrade in status to a “non-member state” with observer status similar to the Vatican if they secure a two-thirds majority, a threshold most experts think can be achieved. As of press time on Sept. 22, a vote had not yet taken place but regardless, it’s clear the Palestinian Authority has already scored a diplomatic coup by forcing the issue of moribund peace talks back into the limelight — and forcing all sides to scramble and lobby their case in the court of public opinion.

What exactly comes next in this high-stakes diplomatic showdown though is anyone’s guess. Non-member states cannot vote at the General Assembly but they can join dozens of U.N. agencies and sign certain international treaties, such as the Rome Statute of the International Criminal Court, although in the Palestinians’ case, the legality of such a move would probably be contested by the United States. Still, U.N. recognition could in theory pave the way for the Palestinian Authority to pursue claims against Israel at human rights bodies and the International Court of Justice. It’s a roundabout but effective strategy to ratchet up international pressure — and boycotts — on Israel, sideline the United States, and open up new legal avenues for challenging settlement construction.

Palestinian Authority President Mahmoud Abbas has said his government was seeking recognition not in place of negotiations with Israel, but in addition to them — and most observers say the U.N. maneuver could ultimately strengthen the PA’s hand in any talks. Conversely, however, it could have the opposite effect and alienate Israeli officials from even returning to the table.

Moreover, the immediate “day-after” impact will be far less dramatic for average, disenchanted Palestinians who struggle with widespread unemployment — fueling fears that a symbolic victory at the United Nations could spark a violent uprising in the West Bank or Gaza. And at the end of the day, Palestinians still lack a functioning, independent state and remain under Israeli control.

Which is why Mizrahi of the Israel Project told The Diplomat that “even if 192 countries in the U.N. supported the resolution, if Israel opposed it you would not see any progress for Palestinians on the ground. Indeed, you could see a loss of key U.S. financial support for the Palestinians.” 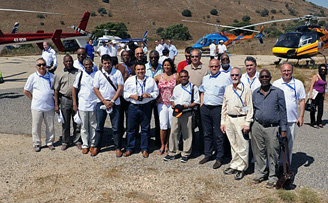 D.C.-based ambassadors stand in front of the “Intellicopters” that took them across Israel’s narrow waistline and then up north to the Golan Heights close to the Syrian and Lebanese borders, during a trip hosted by the Israel Project.

U.S. lawmakers of both parties are not only threatening to cut off aid to the Palestinian Authority, but some would also like to target any bilateral assistance provided to nations who sided with the Palestinians at the U.N. General Assembly. Incidentally, U.S. aid is also a crucial factor for many of the countries represented on the Israel junket. Last year, for example, Uganda received $458 million in non-military U.S. assistance, while Burkina Faso got $421.7 million, Haiti got $368 million, and Liberia $235 million.

Other countries that sent their U.S.-based ambassadors on the Israel mission range from tiny Grenada (population 100,000) to mountainous Mongolia, which is twice the size of Texas but has only about 3 million inhabitants. Many Eastern European countries also sent their top diplomats from Washington, as did the Spanish-speaking Dominican Republic and English-speaking Belize.

“This was an excellent trip, very well-organized from all points of view,” said Gilbert Galanxhi, the Washington-based ambassador of Albania — 70 percent of whose 3 million people are Muslim. It’s also one of the few countries participating on the trip that maintains an embassy in Tel Aviv.

“Albania has always been friendly to Israel. It’s the only country in the world that had more Jews after the Holocaust than before. Not a single Jew was handed over to the Nazis,” Galanxhi said proudly. “So I think the vote will be carefully discussed in my capital and will be in favor of Israel.”

Galanxhi said that while he was impressed with Israel’s prosperity and technological innovation, he was “astonished” at the attitudes of the Palestinian businessmen he met with in Ramallah.

“They seem to be living 10 years in the past,” said the ambassador, whose Balkan country suffered under half a century of communist dictatorship and remains one of Europe’s poorest nations. “I directly asked them about the possibility of sitting at the table and talking with the Israelis and they said no. That was striking to me. They should have been much more interested [in improving relations with Israel] than the prime minister [Fayyad], who was far more forward-looking and constructive in his thinking.”

During the trip, delegates visited the headquarters of Israel’s Agency for International Development Cooperation (Mashav) at Kibbutz Shefayim just north of Tel Aviv, where they were briefed about programs in agriculture, education, medicine, emergency response and gender equality offered by Israel around the world. They also visited drip-irrigation operations as well as a factory that makes batteries for electric cars, and met with Democratic Whip Steny H. Hoyer of Maryland, who happened to be visiting Israel on a congressional delegation. During the August recess, in fact, a record number of 81 House lawmakers made the trip, which was sponsored by an arm of the lobby group the America Israel Public Affairs Committee, or AIPAC. (Hoyer also met with President Abbas and Prime Minister Fayyad during his trip to warn them that they were risking the restriction of aid from Congress if they went ahead with the vote.)

But Maen Areikat, chief representative of the Palestine Liberation Organization in Washington — the PLO’s equivalent of an ambassador here — was angered by the junket, which he called a one-sided effort by Israel’s supporters to sway foreign diplomats to oppose the cause of Palestine at the United Nations.

“This is unprecedented diplomatic behavior, for a country, Israel, to invite the ambassador of other countries based in a third country, the United States, to discuss with them an issue related to a fourth party, Palestine. You don’t do that,” he said. “And for a congressional leader like Steny Hoyer to try to convince these ambassadors not to support the Palestinians is very strange behavior.”

Yet Neil Parsan, ambassador of the twin-island Caribbean republic of Trinidad and Tobago — which has a sizeable Muslim minority and has traditionally supported Arab causes or abstained — said the trip was meant to be a fact-finding mission, and on that front it certainly lived up to his expectations.

“It was my first time to the region,” he said. “I thought the trip allowed us to ask questions freely and openly to both sides, and there was no interference by the organizers. It will certainly help inform the decision-making process when it comes to deciding on any resolution put forward at the U.N. General Assembly.”

Constancio Pinto, ambassador of Timor-Leste, one of the world’s newest nations, made it clear that his Portuguese-speaking country in Southeast Asia, agreed with Parsan that the trip was informative.

“As ambassadors, our job is to report whatever we see and hear. I think all of those countries including mine want to see a peaceful settlement of the conflict,” he said. “Of course I will relay all of this to my government, and hopefully they will make the right decision.”

Pinto told The Diplomat that one memory from his trip stood out above the rest. It happened when his Israeli guides took the group of diplomats to Israel’s northern border with Lebanon.

“We lost one-third of our population during the Indonesian occupation, but today, our border guards play basketball with the Indonesian guards. They have lunch on one side one day, and dinner the next day on the other side,” he said. “I asked our guide, a general, whether there’s that same kind of interaction between Israel and Lebanon. He said no. That means peace is still a long way to go.”