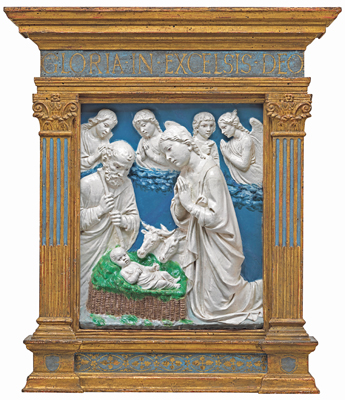 The enduring beauty of Della Robbia sculptures made in Florence hundreds of years ago is on vivid display at the National Gallery of Art, as seen in works such as, from top: “The Nativity.”

Sculpture in Florence during the Italian Renaissance was apparently a family affair — one that has endured for over 500 years and is on stunning display in a new exhibit at the National Gallery of Art that showcases terracotta pieces done by the Della Robbia clan.

“Della Robbia: Sculpting with Color in Renaissance Florence” — which premiered at Boston’s Museum of Fine Arts — is the first major American exhibition dedicated to works by three generations of the Della Robbia family and their competitors.

In the 1400s, Luca della Robbia invented a signature glazing technique that produced a rainbow of rich cerulean blues, opaque whites, greens, yellows and purples that retain their vibrancy even today. The technique involved combining durable terracotta (baked clay) with the brilliant hues of painting and the shine of vitreous glaze to meticulously preserve the colors of his sculptures.

His workshop quickly flourished and Luca passed the tradition down to his nephew Andrea, who in turn passed it to his son, ensuring the survival of the family legacy, although different generations lent their own particular style and distinct colors to the art form.

“People maybe know the Della Robbia but don’t really know them,” said Alison Luchs, curator of early European sculpture and deputy head of the Department of Sculpture and Decorative Arts at the National Gallery of Art. “The art is sometimes seen in places and treated as decoration, but Boston curator Marietta Cambareri selected the best Della Robbias and made it possible to appreciate the quality of what they did and the charm, colors, luminosity and subject matter.”

Della Robbia terracotta sculptures are some of the most iconic pieces of art from the Italian Renaissance, with the family’s recognizable ceramics gracing Florence’s courtyards, churches, hospitals and the homes of a wide range of patrons. The exhibit highlights 40 examples that illustrate the range of sculptural work produced by the family’s workshop, including Madonna and Child reliefs, household statuettes, portraits and more.

The sculptures “evoke the spirit of Renaissance Florence,” Luchs said. “The colors are still fresh after years and in a way it transports you to another time and place — the colors are so harmonious and serene, yet exhilarating and soothing at the same time.” 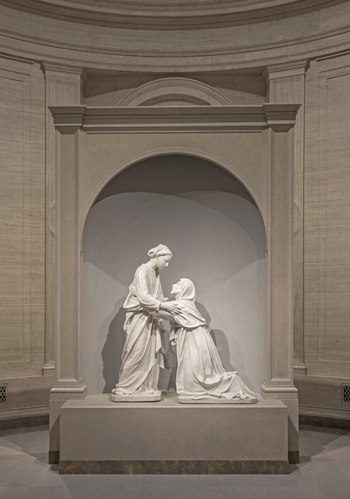 Visitors will be struck by how well preserved the works are. “By simply looking at the colors and realizing they’re the same colors people saw in the 1440s, it’s a visual experience comparable to what original viewers have seen,” Luchs said.

The exhibit serves as a bridge between cultures — much as the worldly Luca della Robbia did in the 1400s, according to Luchs, who invoked a quote from art critic John Ruskin about the master sculptor: “Luca is brightly Tuscan, with the dignity of a Greek, he has English simplicity, French grace, Italian devotion — and is, I think, delightful to the truest lovers of art in all nations and all ranks.”

Indeed, some of the art is a rare visual treat for U.S. audiences. Luca’s masterpiece “The Visitation,” for example, which is on loan from the Church of San Giovanni Fuorcivitas in Pistoia, is on view for the first time ever outside of Italy.

The nearly life-size composition depicts a touching, intimate scene in which a pregnant Virgin Mary is welcomed by her elderly cousin Elizabeth, herself pregnant with St. John the Baptist. According to the National Gallery, the two figures were fired in four individual pieces that fit securely together. Following its time in Washington, the beloved work will return to Pistoia, designated as the Italian Capital of Culture in 2017.

In Luca’s rendition, Elizabeth is on her knees as the two pregnant women share a compassionate gaze and embrace. “It’s a visualization of a miracle in very human terms,” Luchs said. “One old, one young, but there’s such an understanding of what’s happening.”

Another showstopper is Giovanni della Robbia’s “Resurrection of Christ,” an ornate piece that sits high above the garden court when entering the West Building. The 12-foot-wide relief — composed of 46 separate pieces — once adorned the upper section of a garden gate in the Tuscan villa of the Florentine Antinori family, who commissioned it in the early 16th century. To prepare for its departure from Brooklyn for the first time since its donation in 1898, the lunette underwent a year-long conservation funded by the current generation of the Antinori family, who also provided support for the exhibition.

Throughout the exhibit’s stay, there will also be concerts in the West Building. The musical program “Florence: The Cultural Crucible” will be performed March 4, April 15 and May 6 at noon and 2 p.m.

on the National Mall between 3rd and 9th Streets at Constitution Avenue, NW