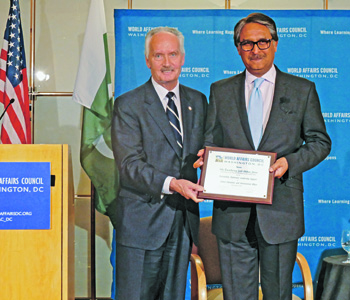 At a time when Washington feels divided, the World Affairs Council – Washington, DC is preparing to honor five organizations for their unifying global contributions.

“It’s become an eagerly sought-after event,” said Tony Culley-Foster, the council’s president and chief executive officer. “If it isn’t an A-list event, it’s a B-plus-plus-plus, even on the Washington calendar.”

About 25 percent of the 800 expected guests hail from the diplomatic corps, Culley-Foster said, but attendees can also expect to rub elbows with leaders from Capitol Hill, private industry and nonprofit groups at the $1,000-per-seat event. The goal is to bring in $1 million for the council, whose net assets totaled about $1.2 million in 2015.

For those who can’t make it, WAC-DC will live-stream the event with sponsorship from the National Press Club.

Founded in 1980, WAC-DC is a nonpartisan educational organization that puts on 40-plus events every year, including the Ambassador, Embassy, Author, Distinguished Speaker and Foreign Policy Panel series, putting the council in contact with more than 1,500 members and guests annually. Recent events included a discussion with European Union Ambassador David O’Sullivan; a panel on Donald Trump’s controversial refugee ban; and an author series on Roby Barrett’s “The Gulf and the Struggle for Hegemony.”

According to the group, since 2000, more than 125 foreign ambassadors, 50 U.S. ambassadors, 23 Cabinet secretaries and two U.S. presidents have shared their perspectives on international affairs with WAC-DC audiences.

Additionally, the Global Communications Committee, led by Kristin Roach, produces “World Affairs TODAY,” a TV program that records the series events, held at the Ronald Reagan Building and International Trade Center, and goes out to about 25 million homes nationwide. (The Washington Diplomat publisher/editor-in-chief Victor Shiblie is a member of the committee.) WAC-DC is one of 97 councils nationwide with a TV program.

“It definitely distinguishes us,” said Roach, whose team also posts the shows on YouTube for international viewers.

WAC-DC, which bills itself as the place “where learning happens,” also spearheads a variety of educational programs as part of its mission to involve as many citizens as possible in the exchange of ideas, knowledge and understanding of global issues. For example, it hosts professional development programs for local educators. Workshops have covered topics such as human rights, climate change and “Turkey: Where East Meets West.” In addition, WAC-DC provides a weeklong Summer Institute on International Affairs for U.S. educators who want to learn new and engaging ways to bring global education into their classrooms (also see “World Affairs Council – DC Prides Itself as Place ‘Where Learning Happens’” in the March 2016 issue of The Washington Diplomat). 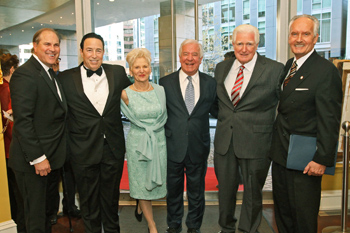 This “small but mighty” organization, as Culley-Foster calls it, sees 2017 as a prime time for growth. Tata Consultancy Services, which has a vice president on WAC-DC’s board, helped the council develop the “2020 Vision Plan” that “has mapped out our budgets and required income and, most importantly, our controlled growth plan for the organization, domestically and internationally, between now and Dec. 31, 2020,” Culley-Foster said. Over 80 percent of the money that comes into the council goes toward programming, he added.

For example, WAC-DC now considers as branded products its International Teacher Exchange Program, which other countries are interested in emulating. “On a fee-for-program service, we can go to a country and assist them with setting up this program in their country,” Culley-Foster said.

Additionally, the council is working with Arlington, Va.-based Marymount University on establishing a graduate certificate in global education for public school teachers across the United States.

Expanding its international footprint is a major goal for 2017, Culley-Foster told us. “We strongly believe that there is tremendous expansion potential for the global education, international affairs and global communications program services between now and 2020,” he said. “All the ambassadors that I have spoken to have indicated enormous interest in doing more with us and I think that has to do with recognizing the power of education.”

And the Award Goes to…

WAC-DC will celebrate the power of education at its gala later this month by honoring five entities that meet the council’s specific criteria, but more importantly, that align with its three overarching goals. The winners are thoroughly vetted over the course of a year by WAC-DC’s board of directors.

Culley-Foster emphasized that the awards go to organizations, and that the people who accept them at the gala do so on the organization’s behalf.

What’s more, for the Distinguished Diplomatic Service Award, “the countries nominated have to be an ally nation of the United States. It’s not open to the world,” he explained. “It’s rewarding people who have a commitment to the democratic process and engaging with the global community in a constructive way.”

Here’s a look at this year’s winners:

This was a no-brainer this year, Culley-Foster said. The board voted unanimously for Colombia to receive this honor, which goes to a country that is an ally of the United States and seeks to advance, through diplomacy, its relationship with America.

Colombia was the clear choice, Culley-Foster said, because of the signing of a revised peace agreement between the Colombian government and the country’s largest rebel group, the Revolutionary Armed Forces of Colombia, or FARC. The country was sharply divided over whether the government should work with FARC, which emerged as a left-wing guerrilla group in the 1960s in response to socio-economic inequalities but in recent decades launched a wave kidnappings, killings, extortion and other brutal tactics while also trafficking cocaine. 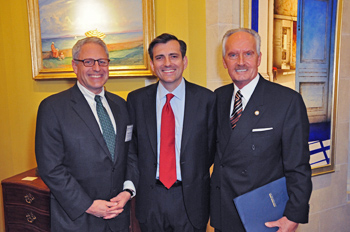 Despite a public referendum last October that narrowly rejected the historic accord and almost derailed years of peace talks, President Juan Manuel Santos was able to refine the deal to address voter concerns and push it through Congress.

Santos won the Nobel Peace Prize last year for brokering the agreement, which effectively ends the longest armed conflict in Latin American history — one that, over the last 50 years, has cost as many as 220,000 lives and displaced nearly 6 million people.

At the end of 2016, a delegation of business leaders led by former Vice President Joe Biden (including Bill Ballhaus, who will accept the Global Education Award on behalf of Blackbord) traveled to Colombia to form a new U.S.-Colombia Advisory Council to discuss the countries’ economic partnerships.

“It’s been a transformational event for Colombia, and we feel very good about the fact that there was unanimous approval from our board to give this as our apex award in terms of the diplomatic community,” Culley-Foster said.

“On behalf of Colombia, I am deeply honored and humbled to receive the World Affairs Council Distinguished Diplomatic Service Award, especially at this time,” said Juan Carlos Pinzón, ambassador of Colombia to the United States, in a statement. “Today, Colombia is not only a nation transformed, but also, for the first time in more than 50 years, we are a nation building a lasting and stable peace. As we embark on the next phase of our positive transformation, we look forward to continuing to engage with the World Affairs Council to expand dialogue on building a more peaceful and prosperous future across the Americas and around the world.”

Typically presented to a U.S. Cabinet-level representative, WAC-DC opted this year to honor the Jane Goodall Institute. Based in Vienna, Va., the institute has helped cover 3.4 million acres of habitat under conservation action plans; provided over 300 education scholarships to women; cared for 290 chimpanzees and gorillas at its sanctuary; published nearly 500 scientific papers; and engaged youth in nearly 100 countries through its Roots & Shoots program.

Brought to fame by her work with chimpanzees in the 1960s, Goodall has since traveled the world speaking about and encouraging action on environmental issues. When she delivers the keynote address at the gala, she will focus on environmental protection and sustainability, Culley-Foster said.

“It will be a different sort of message this time than we’ve had in previous years,” he noted.

“The Jane Goodall Institute works to inspire people to take action to benefit other people, animals and the world we all share,” Goodall, founder of the institute, said in a statement. “We each have the power to make a difference every day and to be an ambassador of positive change for our world. I am honored to receive the Global Ambassador Award from the World Affairs Council-Washington, DC in recognition of this work.” 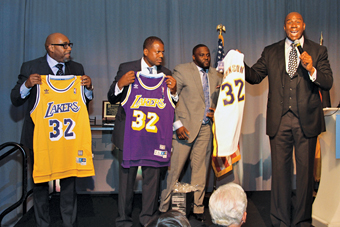 Educator of the Year

This award goes to a university, college or school system that shows academic excellence, innovation and entrepreneurship in a curriculum that hits on the council’s goals of global education. This year, the prize goes to Marymount, where taking an international perspective is written right into its vision: “Marymount will distinguish itself through a culture of engagement that fosters intellectual curiosity, service to others, and a global perspective,” President Matthew Shank noted in an email. He will accept the award on the university’s behalf.

“One of the hallmarks of a Marymount experience is our diversity and world view,” Shank said. “We are enriched and blessed by our diversity. As a Catholic University founded by the [Religious of the Sacred Heart of Mary, a Roman Catholic community], we have a special obligation to preserve and celebrate our diversity in the many forms that it takes on our campus.”

The award reinforces the university’s “common ground” theme, he added. “We come together with unique perspectives from many backgrounds, but learn and leave Marymount sharing and embracing our values of faith, diversity and respect for the dignity of all individuals,” Shank said. “So as you can see, this honor is very rewarding and reinforces the work we are doing at Marymount to achieve our vision.”

This year’s winner is Blackboard, having served as a role model for the development, advancement and delivery of worldwide programs that promote WAC-DC’s goals. Headquartered here in D.C., the educational technology company provides kindergarten through 12th grades and higher education institutions with software designed to foster new ways of learning. Additionally, it conducts learner research, enabling the company to adapt to students’ needs.

“It is a privilege and an honor for Blackboard to receive the Global Education Award from the World Affairs Council,” said Blackboard Chairman, CEO and President Bill Ballhaus in an email. “Not only is this a reflection of our employees and the passion that they bring every day to making a difference in the education community, but it’s also a testament to the work of our partners and their dedication to making an impact on the lives of learners worldwide.”

The Corporation for Public Broadcasting won the award this year for its efforts to educate through its funding of public television and radio, as well as its support of independent filmmakers.

“CPB is proud to support public media’s courageous international reporters and appreciates the recognition by the World Affairs Council of D.C. for our commitment and their work,” Patricia de Stacy Harrison, president and CEO, who will accept the award, said in an email. “This past June, two NPR journalists, David Gilkey and Zabihullah Tamanna, were killed while on assignment in Afghanistan. In their honor, CPB provided the lead gift to start a memorial fund to increase the number of photo and video journalists worldwide so that their work will continue through new generations.”

CPB helps almost 1,500 locally owned and operated radio and TV stations nationwide, and in the past seven years, it has provided more than $27 million to public media stations to fund 22 local journalism collaborations — in addition to its support of National Public Radio’s foreign news bureaus.

“The Global Communications Award from the World Affairs Council of D.C. is an important recognition of the essential role public media plays advancing understanding of issues of national and international importance,” added Harrison, former assistant secretary of state for educational and cultural affairs and acting undersecretary for public diplomacy and public affairs.