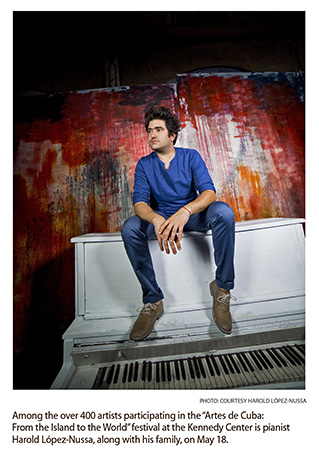 The Kennedy Center’s “Artes de Cuba: From the Island to the World” festival was three years in the making, spanning a remarkable period of change in the tumultuous diplomatic relationship between Washington and Havana.

With 400 artists and over 50 events, the unprecedented gathering of Cuban and Cuban-American artists was designed to celebrate and showcase the country’s vibrant arts and culture. Held from May 8 to 20, the two-week festival offered an array of dance, music, visual art, theater and film in the midst of a fascinating, but uncertain, moment in U.S.-Cuba relations.

Alicia Adams, vice president of international programing and the festival’s curator, told The Washington Diplomat that the Kennedy Center, as the national center for the performing arts, has a “different mission and responsibility than other arts organizations.” The center wants “to provide as many windows for people to peek through and get a sense of and tap into the essence of the culture,” she said.

“It’s about a cultural exchange,” Adams, who has been traveling to Cuba for 20 years, said. “Art is the best tool we have to bring people together. I don’t think art solves the problems or solves the issues, but it certainly gives a way to look at it and discuss it differently. And that’s what we’re doing.”

And the focus on Cuba has paid off, with strong ticket sales and great enthusiasm from guests, including ambassadors and members of Congress, according to Adams.

“This is unprecedented in that it’s a two-week festival with all of these artists gathered in this moment, in this time, in this building,” Adams said.

When the Kennedy Center began planning the festival three years ago, organizers, of course, couldn’t predict what diplomatic context it would fall into.

The U.S.-Cuba relationship has long been an intriguing one, stretching back centuries to encompass important trade agreements, powerful cultural and artistic exchange and plenty of diplomatic drama. With the defeat of Spain in 1898, the U.S. military occupied Cuba until 1902, when formal independence was granted. After the 1959 Cuban Revolution, when communist revolutionary Fidel Castro came to power, relations rapidly deteriorated, and the diplomatic break between the island country and the United States was cemented in the early 1960s with the U.S. trade embargo.

Five decades later, things started to shift. In 2014, U.S. President Barack Obama and Cuban President Raúl Castro announced that they had begun normalizing relations between the two countries. It was dubbed the “Cuban thaw.” The next year, Washington and Havana restored diplomatic relations (also see “Havana Basks in Renewed Ties with Washington, But Will Honeymoon Last?” in the October 2016 issue).

In 2016, there were once again seismic shifts, with President Donald Trump’s election win and Fidel Castro’s death at age 90. Since coming into office, Trump has rolled back some of the Obama administration’s actions, putting a freeze on his predecessor’s thaw. And still-unexplained medical problems suffered by diplomats in Cuba have spurred the U.S. to pull out two-thirds of its embassy staff from Havana (also see “Cuba’s Raúl Castro to Step Down as Island’s Relations with Washington Worsen” in the April 2018 issue).

An understaffed embassy, unsurprisingly, served as a major hitch for the festival in Washington. 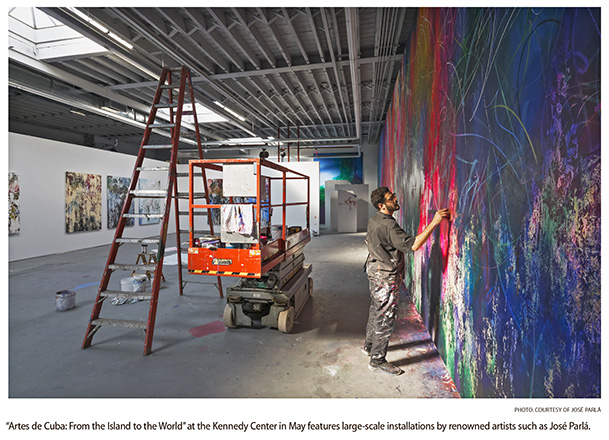 “What became a problem was when that embassy was reduced to a skeletal staff, which meant we had to send 250 artists to Mexico City to get their visas. That becomes a major logistics problem to solve, but it’s the sort of nightmare logistics that we are used to with previous festivals,” said Adams, who has helped the Kennedy Center spearhead major international festivals focusing on countries in Europe, Africa, Asia and elsewhere.

But the logistical efforts paid off, and the Kennedy Center brought hundreds of Cuban and Cuban-American artists to D.C. for an unprecedented showcase of the island nation’s arts and culture. The events, which ranged from reggae and rap concerts to documentaries and theater, showcase Cuba’s diverse melting pot of African, European, Caribbean and Latin American traditions. Highlights included a concert by Grammy-winning Arturo O’Farrill and the Afro-Latin Jazz Ensemble; two programs by the Ballet Nacional de Cuba; and large-scale installations by renowned artists such as Cuban sculptor Roberto Fabelo and muralist Emilio Perez.

“These artists are outstanding. That’s what my work is, to search for these artists and create a vision for how we will present them and a context that will reflect the country,” Adams said.

And the festival serves as a reminder of the long history of cultural exchange that has existed between the United States and Cuba, whatever the state of the diplomatic relationship.

“In the DNA of America is Cuba,” Adams said. “People have been traveling back and forth, both Americans and Cubans, for [hundreds of years]. There was a twice daily boat from Havana to New Orleans, and that helped to create the New Orleans jazz sound.… Cuba helped put the beat into American jazz. You get into the history of these things, and it’s just fascinating.

“It’s circular. We like to think our lives are so drawn by borders and boundaries, but they really haven’t been in that way.”