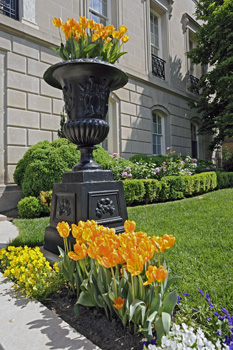 Soon another glorious spring in the nation’s capital will break forth. Then the city will be in full bloom, and waves of people will flood the streets to enjoy the color, imbibe the fragrance, and bask in the botanical beauty of Washington, D.C.

There are also many magnificent private gardens behind the residence walls of the ambassadors who call Washington home. Now, thanks to the imagination and keen eyes of a local couple, everyone can take a peek behind those walls with a coffee-table book laden with color photographs of these private gardens.

“Diplomatic Gardens of Washington,” a photography book by Ann Stevens, with accompanying text written by her husband Giles Kelly, is an exclusive glimpse at the stunning personal backyards of ambassadors. The horticultural photography book, released last year, features historical anecdotes and details about a dozen residences, ranging from Australia to France to South Korea.

Germination of an Idea

It all started in May 2007 on Europe Day, when the European Union embassies in Washington hold annual open houses for the public.

“We were at the Danish Embassy and the ambassador greeted us before the crowd came,” said Stevens, a professional photographer and co-author with her husband of the book “Sequoia Presidential Yacht.” “He took us onto the terrace balcony” at the back of the residence “and we could see the garden.”

Dwarf Alberta spruce trees in ceramic pots lined the flagstone terrace, which is bookended on one side by a wall of colorful bas-relief ceramic-sculpted birds native to Denmark. The lush space was also home to an expansive rose garden in which two grass strips cross in the center to mimic the cross in the Danish flag. Near one corner of the rose garden is a child’s life-size wood playhouse replete with a mini porch, front door, window boxes and a Danish flag flying over the roof.

The scene was breathtaking.

That’s when “we thought we should do a book about gardens,” said Kelly, a retired U.S. diplomat and naval officer.

One question led to another, such as how many ambassadors have gardens and would they allow them to be photographed? 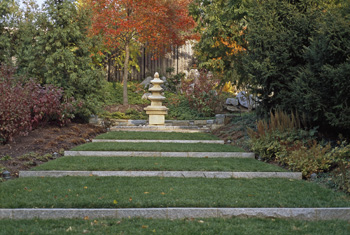 “Let’s write them letters introducing ourselves and our idea,” Stevens suggested — which they promptly did and not much later reached the surprising conclusion that 12 ambassadors were open to their project.

“Then we knew the idea was viable,” she said.

One aim of the book “was to show the beauty and horticultural variety in these private gardens,” said Stevens, who consulted horticulturists to obtain the generic and Latin names of all the plants depicted. That way, if someone wants a certain specimen for their garden, the book can be useful resource, she said.

Another goal was to share these private gardens, which are not open to view, with the public. The couple knew firsthand that there is a lot of curiosity about embassy properties in D.C.

“People want to know what’s over the garden wall,” said Kelly, who noted that even ambassadors are curious about how their neighbors live. Several of the envoys who escorted them on embassy property tours expressed enthusiasm about seeing the gardens of colleagues. “I’ll be looking in your book,” more than one said.

“These aren’t just ordinary gardens,” Kelly added. “They are part of the infrastructure of the ambassador’s residence,” offering a wonderful retreat for entertainment, relaxation and contemplation.

The photographer-writer team juggled three equally important variables as they planned their garden visits: The light had to be right — not too bright, not too cloudy and no rain.

Second, the garden had to be in pristine condition, with full blooms of select flowers and grass free of remnants from the previous evening’s entertainment. Finally, the day and time needed to be convenient for the ambassador and embassy staff.

Ultimately, all the conditions came together, as evidenced by the more than 160 glossy prints in the finished book, which featured the residences of Australia, Denmark, the European Union, France, Germany, the Holy See, Italy, South Korea, the Netherlands, Norway, Sweden and the United Kingdom. 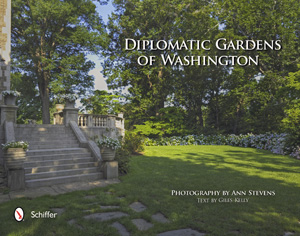 “Everyone was cooperative and generous within our parameters,” said Stevens, though they still laugh about one surprise they found in one garden when they showed up on the appointed date, which happened to be a Monday.

A performing arts event was held over the preceding weekend and as a result the lawn was not in tip-top shape, to put it mildly, and flowers edging the lawn had been completely trampled.

Stevens knew she wanted to showcase the space and structure of the garden in its entirety, not just with a couple of plant close-ups. “So we had to wait another year” for all the flowers to fully bloom again, she said, “but when I got what I wanted, it was worth the wait.”

The gardens that Stevens captured with her camera lens are spacious, light-drenched, dotted with grand old trees, and landscaped with beautiful and abundant annuals and perennials. A mix of trees, shrubs and bordering flowers are integrated with lawn, slate patios, ponds and even flowing water. At every site, distinct features make that garden special. Some are classic and grand, while others are contemporary and restrained.

The sprawling Italian Residence, known as Villa Firenze, boasts a swimming pool with bathhouse and marble benches. A splendid old American elm, unusual for its large size because most elms died years ago from Dutch elm disease, keeps watch over the vast property.

Meanwhile, on the Swedish grounds, a small greenhouse and a wooden swing hanging from an oak tree overlook that wide lawn. 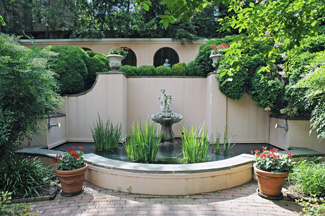 At the European Union Residence, four life-size stone statues, dubbed “the Four Seasons,” depict Greco-Roman women in gracious stateliness and flowing robes, each standing beneath an arched niche in the garden’s pink back wall.

A marble terrace staircase leads from the rear of the French Residence to a semi-circular lawn edged with hydrangeas that vary in color across a blue-white-pink spectrum, depending on the changing acidity of the soil.

From high up on the flag stone terrace of the modern German Residence is a gorgeous view of the Potomac River and Rosslyn, Va. The architectural theme of Germany’s ambassadorial home is a repeating motif of squares that appears wherever the eye lands — on the stone walkways, the border around the pool, and even the windowpanes.

The Vatican’s Embassy, edging busy Massachusetts Avenue across from the U.S. vice president’s residence, is also the site of the residence garden. Situated behind the house is a quiet and secluded sanctuary, as one would expect. Two bronze deer are exquisite in their repose on the lawn. A rust-colored statue of St. Francis of Assisi, patron saint of animals and nature, stands in one corner of the garden while a bas-relief wall sculpture of the Madonna and Child graces a stonewall. 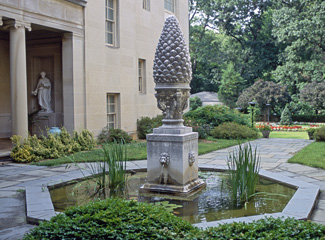 An aura of Asian exoticness pervades the Korean ambassador’s garden, the only one with flowing water. The garden is built on multiple levels and follows the land contours; pathways curve gently and water flows from upper-to-lower areas of the garden into pools topped with water lilies.

“The Korean people have a great respect for and love of nature,” noted Kelly.

“I love the varying textures of the plants, the granite and stone, the wooden pavilion, and the stone pagoda and the stream that runs through,” said Stevens.

Two playful cherubs decorate the basin of a twirling pedestal fountain in the residence garden of the Netherlands. And a delightful surprise lies nearby as the egg of a little white mourning dove egg nestles among the wine-colored pansies in a planter.

Certainly one of the most unusual features found in the book was a 60-foot-long, six-foot-wide lap pool at Norway’s embassy residence. Covered by a roof overhang and running along the interior of the privacy wall abutting the 34th Street traffic corridor, it serves the fitness needs of embassy staff in summer and winter.

Norway’s tucked-away pool is a prime example of the richness that lies just outside public view. “Diplomatic Gardens” offers a window into the secrets that lie just behind those walls.

The nation’s capital, of course, is home to many architectural gems. But the ambassador residences have added another layer of treasures, both in visual aesthetics and botanical value, to the city’s history and heritage. Stevens and Kelly shed light on these offerings in a book that proves beauty knows no bounds.