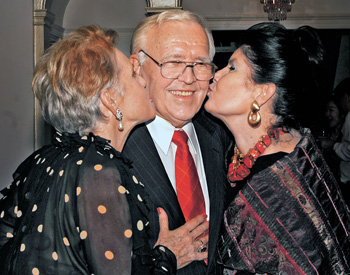 Albert Mogzec, center, gets a kiss from Jan Du Plain, left, and Judith Terra, who helped to organize an 80th birthday party for the popular photographer that was attended by more than 100 friends and family.

It has almost become cliché to say that someone is a fixture on the diplomatic scene, but Albert Francis Mogzec, the suave, silver-haired shutterbug who took photographs at countless receptions, galas and gatherings over the years, truly was a beloved fixture on Embassy Row — whose larger-than-life presence will be missed.

Mogzec, 84, died March 2, 2013, in a Fayetteville, N.C., hospital after a long illness. He is survived by two daughters, Amanda of Goldsboro, N.C., and Wanda of Centreville, Va., as well as three sons, Nick and Julian, both of Salt Lake City, Utah, and Albert of Westminster, Md. He also leaves behind his brother Apolinary Mokrezk of Canada and sister Wanda Linsk of Poland, as well as 10 grandchildren. A funeral was held in Fayetteville on March 7. 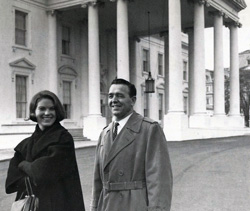 For 50 years, Albert Mogzec took photographs of the many heads of state and dignitaries who passed through the White House.

Mogzec was born Sept. 7, 1928, in Poland, where he was captured by the Nazis during World War II and sent to the Dachau Concentration Camp in Germany. In April 1945, American troops liberated him from the camp.

After working in Paris for a few years, Mogzec immigrated to the United States on June 15, 1950, aboard the USS General M. L. Hersey. While living with his sponsor in Connecticut, he took night classes to learn English.

He eventually become a U.S. citizen and joined the Army, fighting in the Korean War as part of the 101st Airborne Division. Ever the ladies’ man, Mogzec’s interest in photography was sparked when he saw a pretty girl behind a sales counter and he purchased his first camera to talk with her. 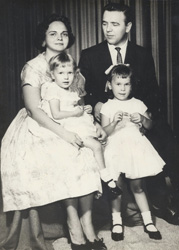 Albert Mogzec poses for a portrait with his wife Alice and his two daughters Wanda and Amanda.

He also took advantage of a traffic citation he issued to his future wife Alice while he was a military police officer in Fort Bragg, N.C., to ask her out on a date. The two married in 1954 and moved to Washington, D.C., four years later.

Mogzec worked for the Pentagon in the photography lab, where he learned to process film. But when a friend asked him to shoot his wedding, he realized that freelance photography was more enjoyable than going to the lab every day.

In the ensuing decades, Mogzec made a name for himself photographing ambassadors, heads of state, dignitaries, politicos and socialites at functions large and small. Most Washingtonians, in fact, knew him only by his first name. Albert could often be seen snapping pictures at a receiving line, shaking hands with a president or flattering the ladies. 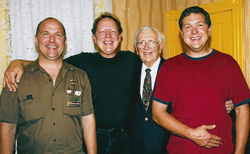 He was a member of the White House News Photographers Association and a personal photographer to King Hussein I of Jordan in the 1980s. He also photographed for various publications, including The Washington Diplomat, which had the privilege of knowing him for the last 15 years.

Albert took his craft seriously but always enjoyed his work, relishing every event and opportunity to meet new people. His heap of business cards is exceeded only by the mounds of photographs he had gathered over the years, depicting everyone from U.S. presidents to Pope John Paul II. Age only seemed to invigorate him, and he could always be relied on for the latest diplomatic scoop or a friendly laugh. 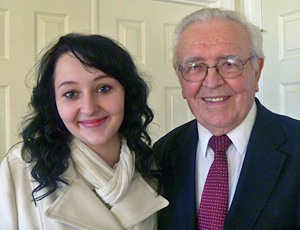 Albert Mogzec stands with his granddaughter Bella Hartt — one of 10 grandchildren he had — at his daughter Wanda’s house in Centreville, Va.

In 2008, more than 100 of his admirers, including various ambassadors, turned out for an 80th birthday party at the home of Judith Terra, who today serves as chair of the D.C. Commission on the Arts and Humanities. Terra called Albert “a real legend in this city.” He even received a proclamation from then-D.C. Mayor Adrian Fenty on behalf of the city.

Jan Du Plain, who helped to organize the party and was a longtime friend, said Albert “left an indelible mark in our nation’s international community.”

“When I walk through any embassy door in the nation’s capital today, I feel Albert’s beautiful laughing smile and cheerful spirit. He was the heart of the diplomatic corps for over 50 years and his photographs kept a record of our lives,” Du Plain said. “For those who knew him, we loved him dearly and he will forever be in our hearts. May his light continue forever.”

A memorial service for Albert Francis Mogzec will be held in Washington, D.C., on Thu., April 18, at 12 noon at St. Ann’s Catholic Church, 4400 Wisconsin Ave., NW. A memorial celebration is also being planned for April. For details, please contact Wanda K. Mogzec at (703) 673-8408 or wanda.mogzec@gmail.com.