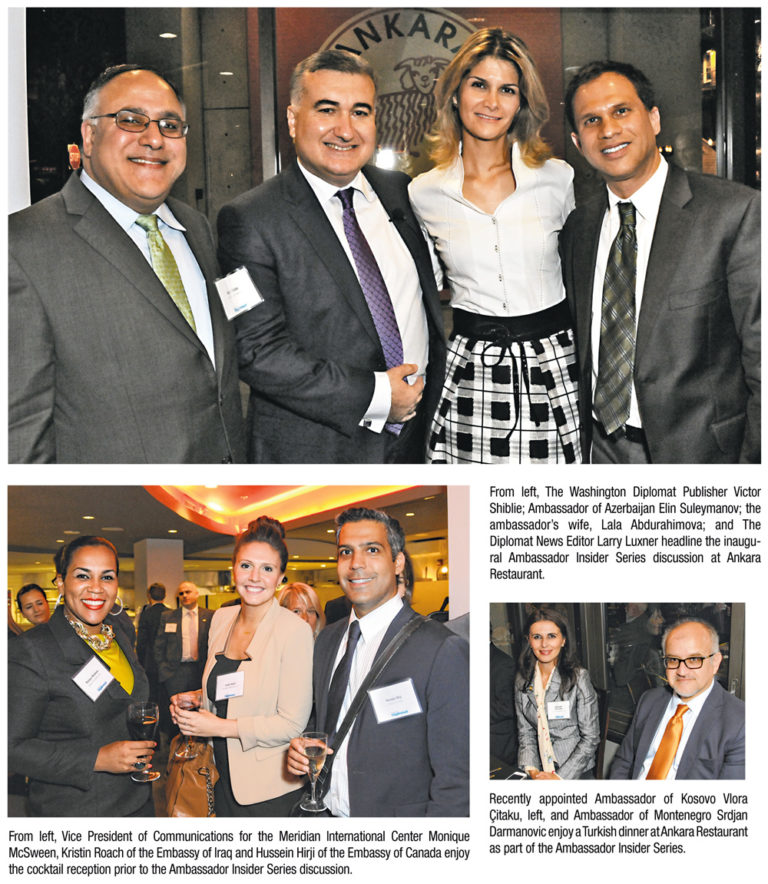 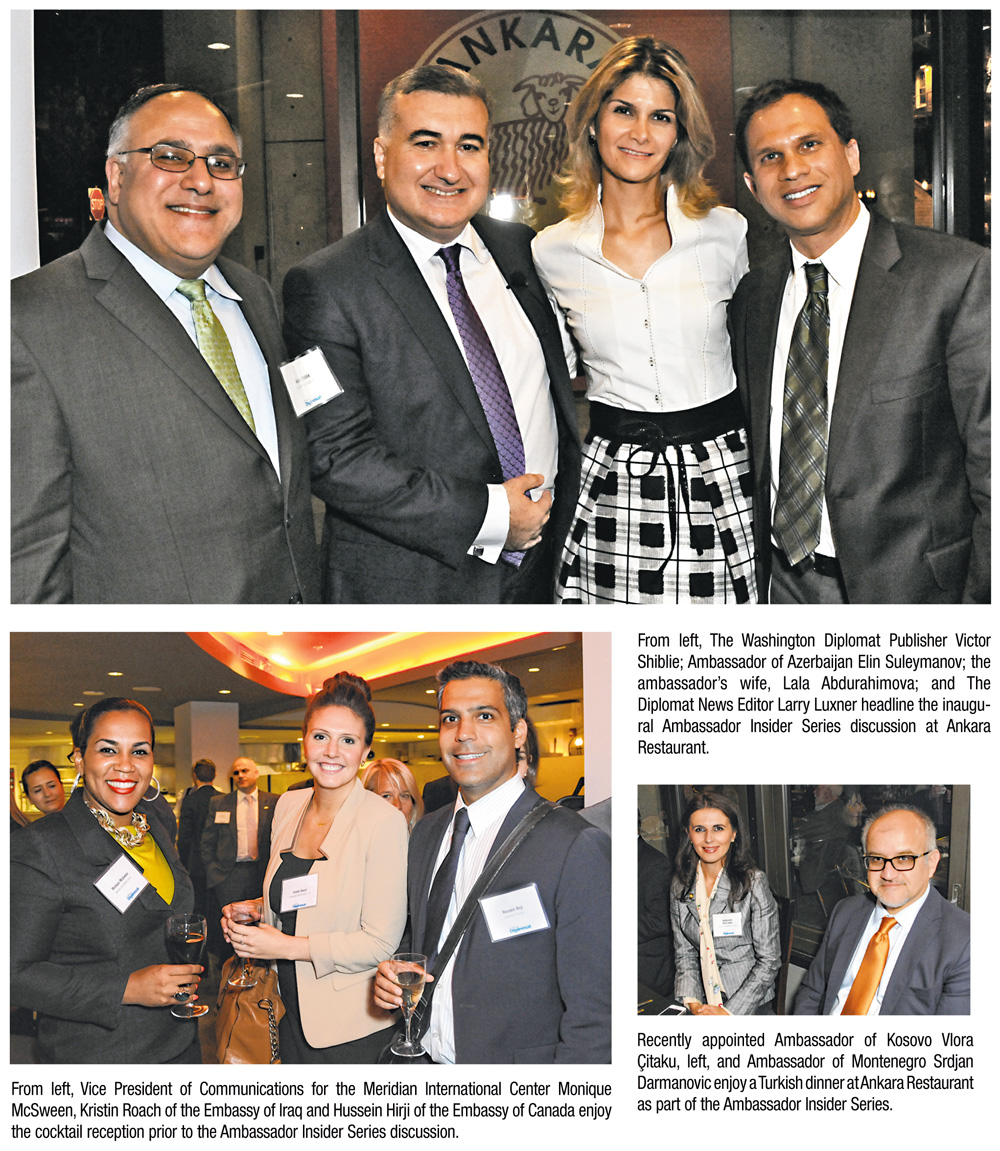 Azerbaijan took the spotlight Oct. 6 as the focus of The Washington Diplomat’s inaugural Ambassador Insider Series event — a unique chance for locals to interact informally with some of the over 180 men and women who represent their countries here as ambassadors to the United States.

Elin Suleymanov, who has served as Azerbaijan’s envoy in Washington since late 2011, answered this reporter’s questions with grace and humor for at least 35 minutes — then took half a dozen questions from the 100 or so people in attendance, which was double the crowd we had originally anticipated.

As guests enjoyed traditional meze plates of hummus, baba ganoush and labneh along with lamb and chicken kebab, grilled vegetables and baklava, Suleymanov gave a crash course on his obscure yet energy-rich former Soviet republic in the Caucasus.

“Azerbaijan is located in a unique neighborhood,” he explained. “If you look at a map, you’ll see that Azerbaijan is the only country in the world that borders both Russia and Iran. It’s a very diverse place, where Slavic culture meets Persian culture, and where Turks meet Christians. It’s a melting pot, and that’s why we have a Jewish community over 2,500 years old. It’s also the only place in the world where Sunnis and Shiites pray together in the same mosque.”

Suleymanov remembered the day back in 1993 when, as a struggling student at the University of Toledo in Ohio, he went to apply for a social security card. The clerk went through a number of questions and then asked the young man if he defined himself racially as Caucasian.

“Americans are amazing,” Suleymanov said with a laugh. “Of course I’m Caucasian, I told him. I’m from the Caucasus!”

Asked about his country’s current ties with the United States, Suleymanov said the Washington-Baku relationship is fundamentally that of a strategic partnership. 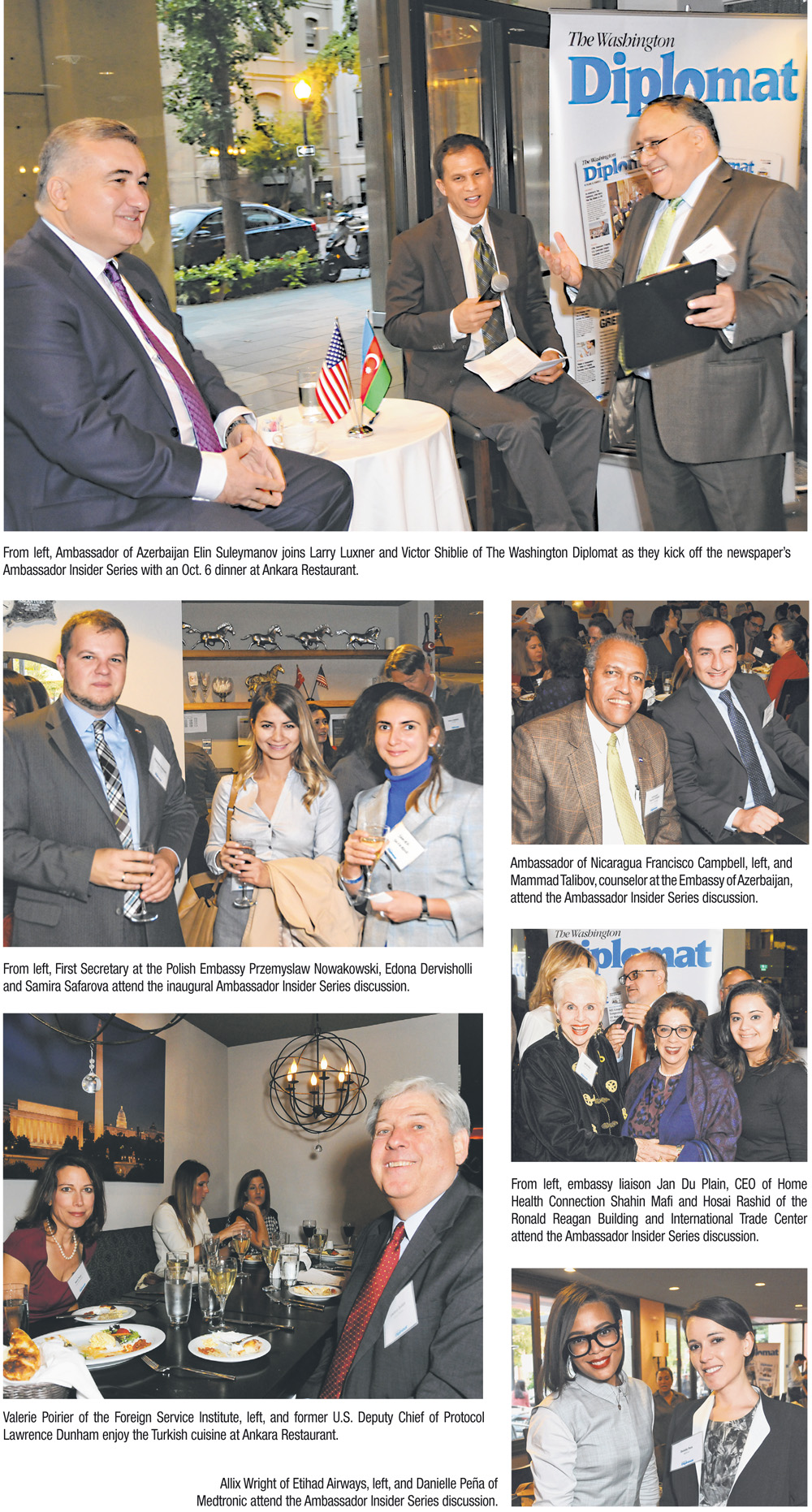 “Azerbaijan was the only country in the Muslim world which fully supported combat boots on the ground in Iraq,” he said. “It was among the very first countries to respond to the tragedy of 9/11, within an hour in fact — and we still have our troops in Afghanistan. I think we have a very strong relationship, based on energy, economy, tolerance and multiculturalism. Partnerships require a long-term commitment, and that’s why Azerbaijan has chosen to be a friend of the United States. It was a conscious choice.”

One of the most impressive results of that partnership is the Baku-Tbilisi-Ceyhan pipeline, a $3.9 billion project commissioned in 2006 that today pumps 1 million barrels of crude oil a day 1,768 kilometers from the petroleum-rich Caspian Sea through Azerbaijan and Georgia to the southern Turkish port of Ceyhan on the Mediterranean.

“This pipeline was the first physical connection between a NATO member, Turkey, and the former Soviet Union. It forced Azeris, Turks and Georgians to work together and was a great success,” the ambassador said, noting that U.S. support was crucial in getting the pipeline off the ground. “It began under the Clinton administration and was picked up and strongly supported by the George W. Bush administration.”

Yet today, Azerbaijan is feeling the same economic pinch that is squeezing other resource-rich countries. More than 70 percent of its GDP and some 93 percent of its export revenues come from energy, and international prices have tumbled to around $53 per barrel today — down from $110 a barrel only a year ago.

This is a serious concern for any oil-dependent nation, but Suleymanov insists Azerbaijan is well prepared to weather the storm.

“What did we do when crude prices were high? We beautified our capital city, bought new airplanes and invested in infrastructure — new airports, highways and ports,” he said. “Azerbaijan today has almost a first-world infrastructure, especially around Baku. That’s what we did with the money. We didn’t waste it on meddling in someone else’s affairs.”

Suleymanov added: “People like to talk about excess spending, but the overwhelming majority of our finances were invested with a view toward the future, like sponsoring thousands of students to study abroad. All this should help us in the long run.”

Meanwhile, said the ambassador, Azerbaijan enjoys excellent relations with Israel, despite the fact that more than 90 percent of its 9.5 million inhabitants profess Islam.

“Azerbaijan has never had a trace of anti-Semitism,” he noted proudly. “Why would we? The Jews of Azerbaijan were the champions of Azeri independence. Israel today is an innovative economy, and we’d like to learn a lot of things from them. The only determining factor in our relationships with other countries is whether Azerbaijan benefits from it, and in the case of Israel and the Palestinians, I’m glad we’ve been able to manage this in a non-confrontational way.”

During a recent visit to Israel sponsored by the American Jewish Committee, the Azeri ambassador made a side trip to the West Bank and met with Palestinian officials in Ramallah.

“The Palestinian leadership asked for our help in building better ties with the Israelis,” he recalled, “but we told them, ‘Look, we have enough of our own problems’ and so we took a pass for the moment.”

In fact, one of Azerbaijan’s biggest problems — and longest foreign policy headaches — is its ongoing conflict with Armenia, which began in 1988 when Armenia made territorial claims against Azerbaijan. That led to outright war in 1992 and Armenian occupation of 20 percent of Azeri territory, including the disputed region of Nagorno-Karabakh.

The two countries signed a ceasefire agreement in 1994 that has yet to be implemented, despite ongoing peace talks mediated by the OSCE Minsk Group (Organization for Security and Cooperation in Europe).

“We talk to each other, but what do these talks produce?” Suleymanov mused. “The agreement is on the table. It’s a matter of political will. Armenia is our neighbor. They shouldn’t be our enemies.” 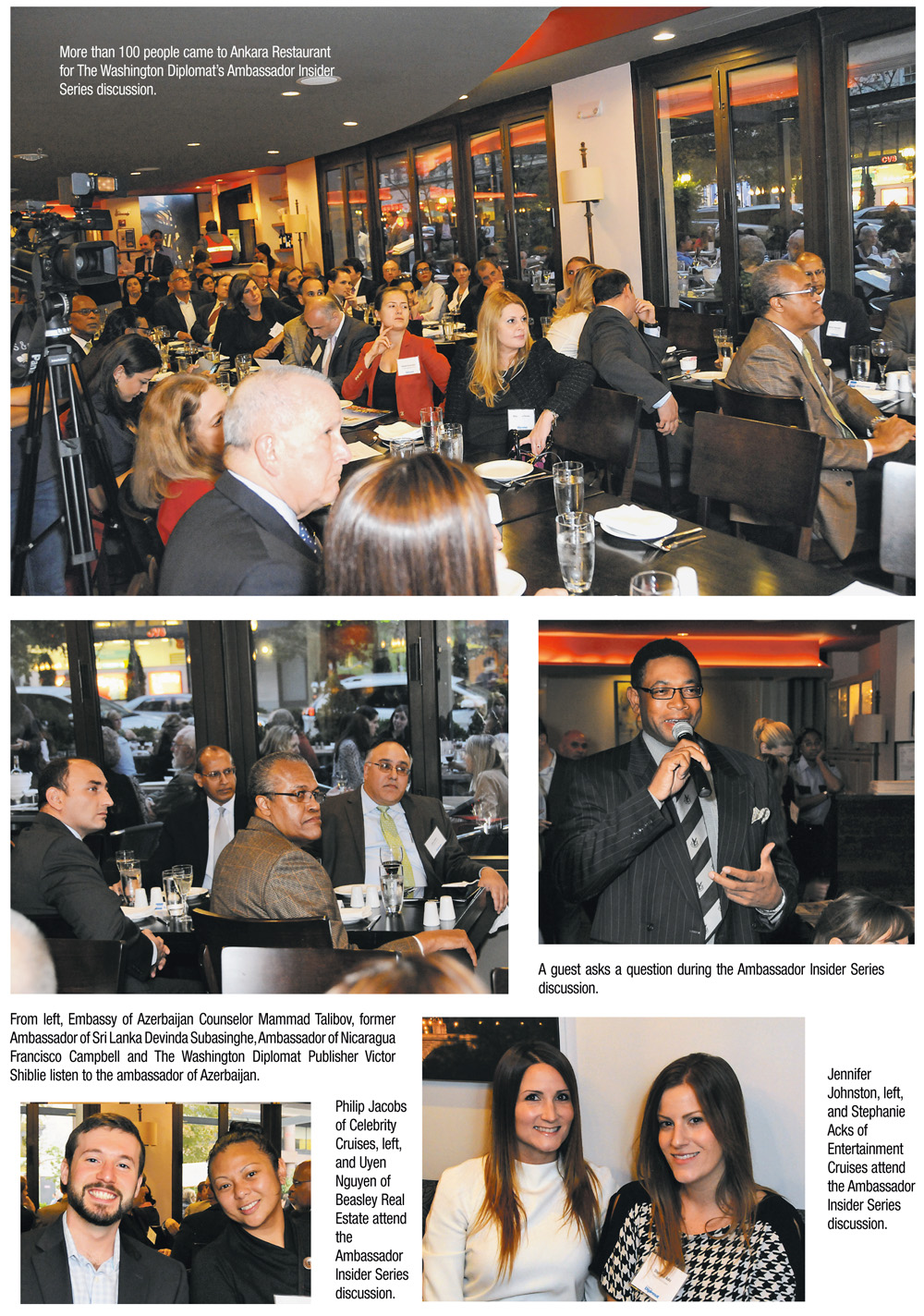 Yet the ambassador said peace cannot happen as long as one-fifth of his country is still under military occupation.

“The president of Armenia recently said Nagorno-Karabakh is Armenian. That’s not true,” Suleymanov charged. “Azerbaijan is not a perfect place. No country is. But I’d be ashamed to be pursuing a tribal agenda in the 21st century.”

Another flashpoint is neighboring Iran, home to some 25 million ethnic Azeris — more than two and a half times the population of Azerbaijan itself. The secular government of Azerbaijan’s president, Ilham Aliyev, has long presented itself as a beacon of religious tolerance compared to the strident Islamic fundamentalism preached by the ultra-conservative ayatollahs in Tehran; it’s no coincidence that three of the world’s hottest pip divas — Jennifer Lopez, Shakira and Rihanna — have all performed in Baku.

Asked for his take on the recently concluded nuclear deal negotiated by Secretary of State John Kerry and his European counterparts, Suleymanov said it’s complicated.

“We do not want to see anybody else get nuclear weapons. We think the commitment to ensuring nonproliferation is a good step forward,” he said. “But unfortunately, we have not been very closely consulted on this issue. There’s an ongoing concern in Israel, Saudi Arabia and Turkey that the agreement may lead to instability [in the form of increased Iranian-sponsored terrorism], which almost offsets the stability produced by the accord.”

Before opening up our interview to questions from the audience, we grilled Suleymanov on the stickiest subject of all: persistent allegations that the Aliyev government persecutes journalists who write articles or broadcast reports about official corruption.

In particular, we asked him about Khadija Ismayilova, a U.S.-trained investigative reporter for Radio Free Europe/Radio Liberty who was recently sentenced to seven and a half years in prison for tax evasion, illegal entrepreneurship, embezzlement and misuse of authority. Ismayilova, 39, had won international praise for her reports linking the Aliyev family to lucrative but shady business deals in the telecommunications, construction, gold mining, hotel, media and airline industries.

The State Department condemned her arrest, as did Freedom House, Human Rights Watch, Amnesty International and the Committee to Protect Journalists.

“Imagine if Fox News was financed by the government of Azerbaijan and spent all its time bashing Barack Obama,” Suleymanov retorted. “Well that’s what Radio Free Europe does. RFE is a propaganda outlet [financed by U.S. taxpayers]. This is not journalism. I don’t mind that, but to present it as an independent media is just unfair.”

As to Ismayilova’s specific allegations of official corruption and embezzlement, the ambassador said they’re all without merit.

“There has never been any direct, proven evidence of hidden fortunes by Aliyev and his family,” he countered. “The president’s family is not above the law, but not below the law either. Both sons-in-law of President Aliyev are independently wealthy. Is that bad? This is a very Soviet approach. If more and more Azeris are becoming rich, this is a good thing.”