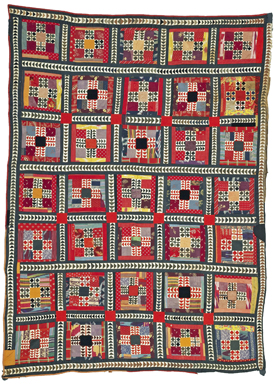 Traditional textiles, including an Afghan cover are featured alongside paintings such as Abdurakhman Rakhimov’s “Eradicate Illiteracy (Likbez)” in an exhibit that explores the interplay between Central Asian textiles and Soviet Socialist Realism art.

In “Old Patterns, New Order: Socialist Realism in Central Asia,” these and other eye-catching textiles are intriguingly juxtaposed with Soviet-era paintings and lithographs to demonstrate the interplay between the 20th-century socialist realism art movement in Central Asia and the local cultures from which it drew.

“This is kind of our new way of looking at incorporating other works of art with textiles. Usually if we ever exhibited art, it may have been one piece of art in an exhibit, because we were strictly the Textile Museum,” said Sumru Belger Krody, senior curator at the museum. “Now we are GW Museum and the Textile Museum. It allows us to expand our horizons, to be able to do these kinds of collaborative exhibitions.”

Krody worked with Marlene Laruelle, Central Asia Program director at GW, to curate the exhibit, which brings together nearly 30 artworks — primarily from what is now Kyrgyzstan, but also Uzbekistan, Kazakhstan and Tajikistan — with about a dozen textiles from Uzbekistan and elsewhere in the region. The art, which has not previously been exhibited in Washington, is on loan from two D.C.-based private collectors, while the textiles belong to the museum’s collection.

Two works at the beginning splendidly highlight the relationship between Central Asia’s traditional textiles and its modern art. Displayed alongside a multicolored, zigzag-patterned kuylak, or Uzbek woman’s dress, from the mid-20th century is a 1950 painting, “The Dancer,” by Kyrgyz artist Nikolai F. Efremenko, of a woman wearing what looks like almost the exact same dress — down to the cut, pattern and colors. 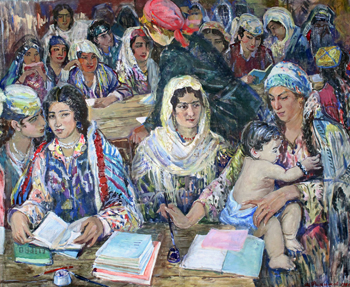 This style of painting, featuring lifelike representations of people, was in the 20th century a new concept for Central Asian artists, who were heavily influenced by Russian schools of art.

“Central Asia is mostly Muslim, and in Islam you don’t traditionally have figurative art. So when the Russian painters arrived at the end of the 19th century, during the Russian colonization of Central Asia, that was the first encounter for Central Asian artists with figurative art,” said GW’s Laruelle. “And what was really impressive is that in only one or two generations, they totally adopted figurative art, with no resistance, and on the contrary, with this kind of elaborate interest.”

Spanning from 1935 to 1992, the artworks reveal how state-supported artists in Central Asia embraced Soviet socialist realism in both its style and subject matter, which emphasized themes like modernity and industrialization. The 1986 painting “Eradicate Illiteracy (Likbez),” for example, shows women dressed in typical Tajik clothing, including headscarves, learning how to read. “Watching Progress,” a 1950s lithograph from the Kazakh Republic, portrays a group of farmers looking from a distance at the construction of an industrial site that appears set to change their way of life.

Both Russian and native artists working in Central Asia also tended to depict the region in a way that was idealized and even Orientalist. “You always have this tension between this political correctness that the painters had to follow in trying to show the Soviet successes … and at the same time they wanted to maintain the local color and the local character of their own culture,” said Laruelle.

“The Bazaar at Bibi Khanom,” painted by an Armenian artist in Uzbekistan in 1945, offers a somewhat abstract representation of the bright colors of a market, filled with people in flowing robes and scarves. Other works show farmers harvesting cotton, women weaving, rural areas dotted with yurts, the turquoise domes of Samarkand and other distinctively Central Asian scenes.

A man’s robe from Uzbekistan

Authentic textiles and costumes appear so frequently in the Central Asian art of this period, Krody says, in part because “many of these craft traditions come close to dying during the first part of the 20th century, because of modernization, economic shifts.” The use of these motifs thus revealed “the ambivalent relationship artists had between Russian modernization versus traditional Muslim culture.” Over time, textiles became important in the emergence of national identities among the citizens of the Central Asian republics.

Yet as much as anything, these artists seem to have been inspired by the textiles around them because of their sheer beauty and vibrancy.

“In Central Asia, the colors are so different that if you are coming from Russia, you arrive and the first thing you see is the colors, the textiles,” said Laruelle. “So I think it was obvious for painters that they wanted to represent these colors. The textiles were everywhere present in their everyday life, even during Soviet times.”