Home The Washington Diplomat June 2014 Droll ‘Three Men in a Boat,’ and Their Dog’ is Synetic’s Latest Success 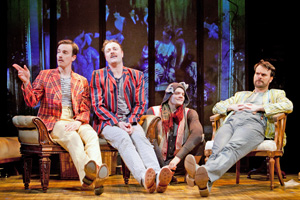 If two is company and three is a crowd, what are three men and a dog in a small boat, in the rain, with only one umbrella?

Synetic Theater’s newest creation, “Three Men in a Boat (To Say Nothing of the Dog),” proves once again that the eclectic company can reinvent itself, while staying true to its original mission.

From left, Rob Jansen as Harris, Tom Story as Jerome, Alex Mills as Montmorency, and Tim Getman as George star in Synetic Theater’s “Three Men in a Boat (To Say Nothing of the Dog).”

Known for its wordless, heavy-handed adaptations and intense modern choreography, Synetic pulls a 180 with “Three Men” and conquers the world of Victorian idleness with wordy, intricate dialogue. And of course it wouldn’t be Synetic without its signature prodigious physicality.

“Synetic takes its name from ‘synthesis,’ the coming together of distinct elements to form a whole, and ‘kinetic,’ pertaining to or imparting motion,” pontificates the production’s playwright and director, Derek Goldman.

The company’s current production does just that.

Goldman’s premiere is a cleverly entertaining theatrical rendition of Jerome K. Jerome’s 1889 whimsical novella. It chronicles three upper-crust men of leisure and their faithful canine on what they perceive to be a much-needed diversion from their hypochondria and aversion to work. They depart on an unlikely boating excursion down the Thames River and hilarity unravels.

Goldman, who returns to Synetic after directing his successful adaptations of “Lysistrata” and Franz Kafka’s “Metamorphosis,” brings with him the highly talented Tom Story, who portrays Jerome, the play’s narrator. Although the compact cast is strong, Story indisputably carries the play. His character is delightful and perfectly cast. Obtuse in his ability to view his own life objectively, he expends endless energy making uproarious commentary about his partners-in-crime, George (Tim Getman) and Harris (Rob Jansen). Both actors were also pulled into the production by Goldman and suitably round out what amounts to a British version of “The Three Stooges.”

Contrary to the play’s title, something must be said about the dog. 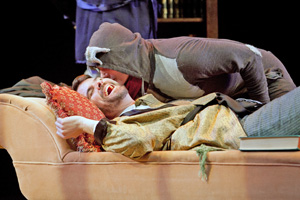 W.C. Fields once said, “Never work with children or animals … they always upstage their adult-human co-stars.” This is true of Montmorency, the animated small fox terrier played by the versatile and limber Synetic veteran Alex Mills. It’s a credit to Mills’s acting chops that he can upstage his fellow actors by playing a dog. Somehow when a human in a dog costume tears up a pillow with his teeth, it’s funnier than when a real dog does it.

At one point, Story gives Mills a run for his money when he transforms himself into a feisty, old, deformed cat that scares off Montmorency, whose overly confident sense of adventure and fortitude both parallel and mock his owners.

The play, a one-act that’s a little under two hours, opens in Jerome’s Victorian study, complete with a fainting couch (that someone inevitably faints on), a settee, a bookcase and chandelier. But, where is the boat?

After a rib-tickling bit where Jerome recalls a trip to the British museum to read up on ailments he and his buddies might have (including giddiness), he misdiagnoses himself with a litany of diseases (he doesn’t have housemaid’s knee) and he and his friends conclude that a peaceful journey down the river on a private boat is just the ticket out of their stressful existence. 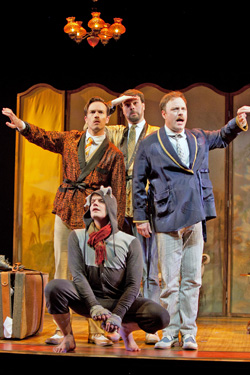 Many pages of script ensue, taken up with the arduous task of deciding what clothes to pack, where to sleep, and what food to bring.

“No cheese! Cheese, like oil, makes too much of itself. It wants the whole boat to itself…. There is too much odor about cheese,” ponders Jerome emphatically.

The rest of the artistic ensemble does a great job showcasing the characters and the narrative with finesse and humor.

Set designer Lisi Stoessel turns the study into a boat, a fitting choice because the men never rid themselves of their desire for creature comforts. Even the pampered dog hates the water and prefers a warm bed. To prove it, an entire mini-scene has the men feign gagging because they forgot to pack the mustard for their cold meat.

Tongue-in-cheek asides are illuminated by quick and effective lighting by Brittany Diliberto, while costume designer Ivania Stack makes sure the boys are done up in colorfully garish blazers, slacks and scarves, with the dog in an attractive floppy-eared onesie.

Calling the plot “elegant satire,” Synetic’s artistic director and CEO, Paata Tsikurishvili, wrote that, “Jerome’s travelogue was received poorly at the time of its release — derided as shallow, silly, pointless and perhaps most frequently, as vulgar.”

To modern audiences, especially residents of the Washington area, where high-pressure jobs and traffic gridlock are none too humorous, the play’s silliness is its beauty. Good comedies, this one included, are rarely pointless. The sophisticated use of musicality and wit in “Three Men,” as well as its numerous soliloquies on self-reflection, make it anything but pointless.

Only harm that’s done is you might want to cancel your trip down the Thames.

Three Men in a Boat (To Say Nothing of the Dog)