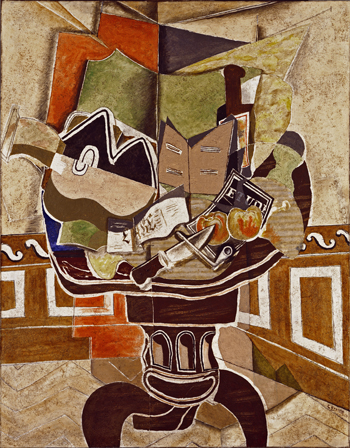 At the turn of the 20th century, technological advances in electricity and communications altered societies and art. The Cubist movement emerged from this period in response to the rapid innovation the world was experiencing and a desire by artists to move past established norms and find new ways to interpret the chaotic world around them.

Enter Pablo Picasso and Georges Braque, the men who pioneered the first style of abstract, avant-garde art. Together in the early 1900s in Paris, the Spaniard and the Frenchmen radicalized the art world by rejecting the traditional forms of techniques, perspective and modeling. Instead, they broke down and reassembled objects using angular geometric forms that became a hallmark of Cubism, fragmenting the subject yet lending it three-dimensional depth.

To Duncan Phillips, founder of the Phillips Collection, Braque was the apple of his eye. The collector was first appalled by Cubism in its early stages, led by Picasso. However, he credits his later understanding of the style in the late 1920s largely to Braque’s work.

The modern art aficionado became an avid fan and was influential in attracting a wider American audience for the French painter. In comparing Picasso and Braque, Phillips was convinced that the “artistries of the reserved Frenchman would better stand the test of time,” according to an exhibit catalogue.

Nearly 100 years later, the Phillips Collection celebrates its benefactor’s admiration for the painter in “Georges Braque and the Cubist Still Life, 1928-1945.” The exhibition highlights 44 canvases, including a few paintings from the museum’s private collection, done at a time when Braque refined the art form from Cubism’s early beginnings, amid the tumult of World War II.

War does not make an overt appearance in these works, which focus on still lifes of largely domestic scenes. Braque used this period to differentiate his style from Picasso’s, experimenting with color, scale, materials and texture — the latter seen in subtle variations of surface that reflect Braque’s early experience as a house painter.

Phillips, the discerning art collector, went to great lengths to acquire Braque’s pieces. Among them is “The Round Table,” a striking vertical still life placed at the center of the exhibit’s entrance.

When Phillips first saw the composition at a New York exhibition in 1934, he was so smitten by what he described as an “unquestionable masterpiece” that he was willing to trade Braque’s smaller works to acquire it, a move that made his heart sink, according to a letter to the art dealer. “The Round Table” then became his collection’s largest and most abstract work, showcasing how Braque manipulated materials to create a textured effect — in this case using oil, sand and charcoal. 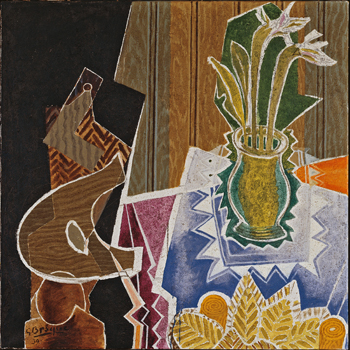 Phillips’s deep appreciation of Braque’s creative process is also revealed in letters about his art dealings and a video installation that explains the artist’s intricate method for layering materials as part of what the Phillips Collection calls his “lifelong concern with the tactile depiction of space.”

The exhibit also reunites, for the first time in 80 years, four paintings that made up the “Rosenberg Quartet,” once housed in the Parisian home of Braque’s dealer Paul Rosenberg.

Taking advantage of their coveted market value, Rosenberg quickly sold two of the paintings in 1931. Phillips was the buyer of “Lemons and Napkin Ring.” It became the fifth painting by Braque in his collection and was immediately featured in an installation called “A Survey of Modern Painting.”

The four canvases also speak to Braque’s process, as he reworked and fine-tuned the pieces over several years in his studio, exploring variations of the same theme in several paintings — an approach he would repeat in other series. 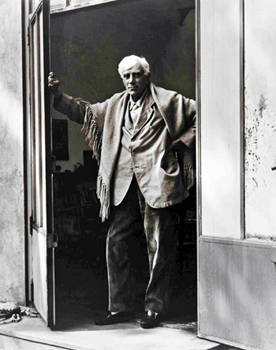 Interestingly, the “Rosenberg Quartet” includes a mosaic table depiction of one of the paintings. In 1975, Rosenberg donated “The Crystal Vase” to the Cleveland Museum of Art. His son later told the museum’s director more about the background of the painting and its three companions. Created in the late 1920s, these four pieces were used as models for marble floor panels in Rosenberg’s dining room. They were all removed from the floor and turned into tables during World War II.

Braque lived through two wars in Europe (he enlisted in the French army in 1914 and suffered a head injury and temporary blindness). As such, one would expect Braque’s work to express this upheaval as Picasso did in the dramatic “Guernica,” one of his most famous works.

Instead, the Frenchman who was trained as a house painter and decorator went on with his still life creations and experimented with bolder hues and angles. He later added new motifs such as skulls, as showcased in “Baluster and Skull.” Critics speculated that the macabre theme was perhaps a response to war, but he simply said: “A skull is a beautiful structure and used to waiting.”

Phillips’s deep admiration for Braque doesn’t stop with this exhibition. The artist was forever etched into the museum’s structure when the founder commissioned one his works — a bird in flight — to become a larger-than-life sculpture that stands at the building’s entrance. Today, the bird symbolizes an enduring collaboration that remains a source of inspiration for the museum that bears Phillips’s name.