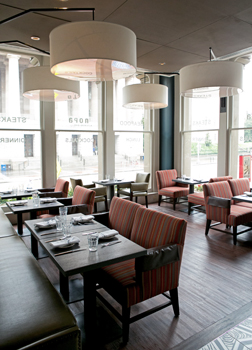 For nopa, Martin Vahtra of New York created a stripped-down aesthetic with minimal décor in the space that used to be occupied by Zola.

When the Malrite Company, which operates the International Spy Museum, decided to get out of the restaurant business and dissolved Stir Food Group last summer, it shut down Zola next door to the museum, leaving a huge and lovely space in the heart of Penn Quarter up for grabs.

Local restaurant mogul Ashok Bajaj moved in to fill the void and recently opened nopa Kitchen +Bar, the eighth establishment in his Knightsbridge Restaurant Group, which also includes Rasika, Bibiana, the Bombay Club and Oval Room. Well known for his other D.C. eateries, which offer a range of distinct fine and neighborhood dining experiences, Bajaj set out to create a restaurant appropriate to the location north of Pennsylvania Avenue (hence the name nopa, also variously written as NoPa and Nopa).

Penn Quarter is at once a revitalized downtown business hub, tourist destination, theater district, sports and concert hotspot, and a residential neighborhood. In an area with such a complex character, finding the right concept presented Bajaj with the opportunity to flex his considerable creativity. He decided upon a brasserie–style restaurant with a full-service bar, space for casual eating, more formal dining rooms, and several private spaces. With a diverse menu of small plates and entrées, diners will find nopa Kitchen +Bar a convenient place for whatever kind of meal they want.

Bajaj selected a Washington newcomer, chef Greg McCarty, to helm nopa. McCarty brings to the venture an interesting culinary pedigree. A graduate of the George Brown Chef School in Toronto, he grew up in Newfoundland and spent summers in Arkansas. This early exposure to distinct culinary traditions, both of which are based on local and seasonally available ingredients, is reflected in his work at nopa.

Seafood and fish figure prominently on the menu and McCarty’s early years in the maritime province — as well as his training by the Gohan Society preparing fish the “Japanese way” — may account for his adept handling of the ingredient. The Chilean sea bass served with baby eggplant and wasabi spring peas may be the best seafood dish at nopa. The fish is pan seared perfectly so that the thick filet is slightly caramelized on the outside and moist and flaky inside. The peas add only the barest hint of heat, and the mild eggplant balances the dish with a firm, almost meaty contrast.

Another seafood standout can be found among the appetizers. McCarty dusts soft-shelled crab lightly with potato starch and flash fries it until crisp, splits it in half, and sets it upright in a pool of avocado basil purée. On the entrée side, rockfish is pan seared and served in a delicate fennel broth lightly flavored with Andouille sausage for a hint of smokiness.

While fish and seafood dominate, there are many other noteworthy choices. Several salads will whet the appetites of meat and non-meat eaters alike, including an interesting version made with several types of spring radish, pineapple, feta and mint. Crunchy and with a faintly Asian flavor, it is a refreshing choice. From the charcuterie board, the Nantucket-style smoked bluefish pâté and the chicken liver tartine with toasted pecans are both mild renditions. One of the tastiest things on the menu is the lowly Brussels sprout. Served as a vegetable side, the big oblong sprouts are quartered, deep fried and dressed lightly with pear and sesame. What a transformation. They may not be good for you anymore, but they sure do go down well. 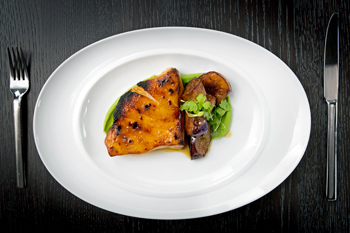 An entrepreneur in his own right, chef McCarty managed his own culinary consulting business and opened a food truck in Connecticut that won acclaim when one of its creations made it onto the Daily Meal’s list of best sandwiches a few years ago. The sandwiches at nopa justify the title. The porchetta sandwich, with rosemary mustard, Napa cabbage and new potato Lyonnais, is a sophisticated take on pork barbeque. Likewise, the BBQ chicken hero served with avocado and shaved red onions is a grown-up version of the time-honored chicken salad sandwich. The nopa burger, topped with Vermont white cheddar and applewood smoked bacon, is a straightforward and delicious version of the classic. And for diners who love fries, nopa’s are excellent.

Pastry chef Jemil Gadea has developed a dessert menu to rival the savories. From the rich, slightly salty and not too sweet chocolate bar — made of smooth chocolate nougat glace and roasted almond toffee — to the white peach frappé made with vanilla crème caramel ice cream and white peach “slush” with a trace of lavender, Gadea’s creations are satisfying and occasionally whimsical. That whimsy can be found in the fried strawberry pies, a house special that’s a far cry from their McDonalds’ second cousin once removed. Served with a tart fromage blanc ice cream, the dish is less sweet than one might expect, but quite rich. 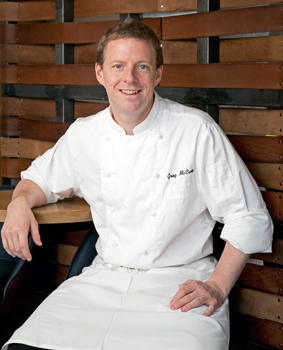 A current seasonal choice, the spring shortcake, is an interesting take on the traditional version, with small chunks of lemon-scented shortcake served over poached rhubarb and accented with an elderflower crème fraiche. Even people who think they don’t like rhubarb are likely to be charmed by this dish with its subtle combination of sweet, sour, herbal and citrus notes.

The wonderful buttery herb dinner rolls are ample evidence of Gadea’s skill as a baker, but equally compelling evidence shows up on the dessert menu as well. Gadea’s maple pecan sticky buns are classic comfort food at its best.

Like its predecessor Zola, nopa is a sleek place for a drink, offering an intriguing mix of cocktails, several classics and some concoctions prepared specially for the restaurant by mixologists Milton Hernandez and Kate Ravelette. NoPa Punch, a head-spinning combination of cognac, Cointreau, spices and citrus, is a perfect summer drink. Equally light and refreshing is the Muscat Love with blueberry, Muscat grapes and sparkling wine. And the Chinatown shake, a nod to nopa’s neighborhood, is a delicious Asian-inspired treat of Tito’s vodka, lemongrass, fresh lime, ginger and soda.

Bajaj completely redid the interior when he took over the Zola space, calling on Martin Vahtra, the James Beard Foundation’s award-nominated restaurant designer from Projects Design Associates of New York, whom Bajaj worked with in creating Rasika West End. Nopa features a stripped-down aesthetic with minimal décor. The space is open and airy, with dove grays, white and deep teal walls; brief accents of color in the red leather banquets and stripped upholstery seats; dark hardwood floors and paneling; dizzying black-and-white tile on the bar floor; and metallic accents throughout. The few art pieces were picked out by Bajaj, including a collection of taxidermy that he bought on eBay that, somewhat quirkily, graces one wall. Also be sure to look up while you’re dining. NopaNopa sports a collection of striking light fixtures.

What’s perhaps most noticeable about all of Bajaj’s restaurants is how consistently well done they are. Across his 25-year history in the D.C. dining business, superior service has been a hallmark of his restaurants — and nopa is no exception. Under the very able direction of general manager Jennifer Lucy, an Alexandria native, everything seems to run without a hitch. Timing from kitchen to table, often a challenge for new restaurants, works at nopa. Regardless of the type of meal — small plate, entrée or snack — the food arrives at the table at its best. Staff are knowledgeable, willing and able to make appropriate suggestions, and seem to enjoy their work.

In fact, if you’ve dined at any of Bajaj’s other restaurants, you may well recognize some of the staff. Part of his success in achieving such consistency may be because he cycles staff between his restaurants. Though advertised as a casual dining spot, nopa has a faint savor of the formality that characterizes Bajaj’s other establishments, perhaps befitting the price point, which is somewhat higher than one might expect in a typical brasserie.

Despite all the talk of his restaurants being Washington power spots, Bajaj seems intent on mastering the challenge of opening a new restaurant and doing it right for the sake of doing it right. Since opening his first restaurant in D.C. in 1988, the classic Raj-style Bombay Club, Bajaj seems never to have taken a false step. He has meticulously expanded his group every few years, trying out new types of restaurants as the fancy strikes him — modern American in an elegant and refined modernist setting (the Oval Room), contemporary continental in a private club setting (701), American bistro and wine bar (Ardeo + Bardeo), contemporary Indian (Rasika and Rasika West End), and Italian osteria (Bibiana). With his newest take on American cuisine in a more casual setting, the affable restaurateur seems once again to have delivered a sibling with all the Bajaj charm and talent of his growing family.