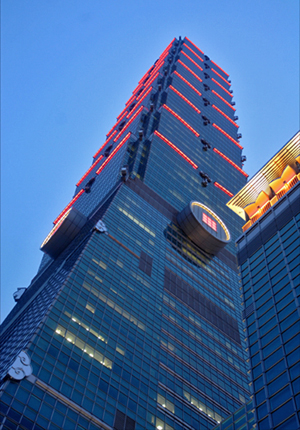 On a brisk February afternoon, The Washington Diplomat visited the US-Taiwan Business Council to learn how a group with about a hundred corporate members but a staff of three or four leverages its influence. We soon found that this discrepancy between staffing and influence might be explained by the dynamism of Rupert Hammond-Chambers, the council’s Scottish-born president, who speaks of the importance of the U.S.-Taiwan relationship with equal parts zeal and eloquence.

“Taiwan is this hugely important market for the U.S. — 11th largest trading partner — and even that belies the importance of Taiwan because of its critical role in the [U.S.] supply chain,” Hammond-Chambers told us in the council’s sleek conference room in Rosslyn, Va., overlooking the Potomac. Bilateral trade in goods and services totaled $85 billion in 2011, according to the Office of the U.S. Trade Representative — a 10 percent increase from the prior year and a 45 percent jump from the year before that.

It could blossom further still. The week before our conversation, the Obama administration announced the renewal of talks between Washington and Taipei over a Trade and Investment Framework Agreement (TIFA) that had stalled for five years. Every foreign business council covets a free trade pact with the world’s largest economy. It is, to a certain extent, their raison d’être.

Trade talks between Taipei and Washington were suspended after Taiwan placed restrictions on U.S. beef imports, prompted by concerns over the safety of U.S. meat and mad cow disease. But last summer, Taiwan lifted the ban on U.S. beef containing traces of ractopamine, a livestock feed additive, paving the way for the resumption of TIFA negotiations.

Hammond-Chambers’s face lit up as he talked about the TIFA. He said the council wants to see U.S. trade negotiators “hit the ground running next month” when they visit Taiwan. “We should be looking at an ambitious trade relationship with Taiwan partly because we’ve taken the past five years off, and partly because Taiwan’s an extremely important partner for us.”

Taipei 101 stands in the heart of Taiwan’s capital as a symbol of the island’s rapid economic progress over the last decade. Despite robust bilateral trade, the United States and Taiwan maintain an unofficial relationship underpinned by the Taiwan Relations Act.

But the glimmer in his eyes faded when the topic turned to White House support for the issue. “Free trade requires significant and ongoing presidential leadership,” something Hammond-Chambers said he hasn’t seen consistently from President Obama.

The council’s chairman, Paul Wolfowitz, a former World Bank president and U.S. deputy secretary of defense in the Bush administration, will be in Taiwan the same time as Obama administration trade negotiators, something he calls a “happy coincidence.” He is taking with him a few council members and is meeting with the Taiwanese president, premier and relevant cabinet members. The delegation hopes to “broaden our contacts in the Taiwan business sector and find ways to help them do business in the United States,” Wolfowitz told us.

But he is also thinking about the bigger picture. “Because of the improvement in cross-strait relations, there’s actually an opportunity for Taiwan to become an important piece of the whole trans-Pacific trade in which China itself is probably the key piece,” Wolfowitz said.

The Trans-Pacific Partnership (TPP) — a trade agreement being mulled by the United States, Australia, Canada, Mexico, Peru, Malaysia, Vietnam and other Pacific nations — could boost trilateral cooperation between Washington, Beijing and Taipei. But Taiwan likely won’t be involved in TPP “without a change of heart within the Obama administration over the next three or four years,” Hammond-Chambers said.

In fact, despite its strong economy (with the 20th largest GDP in the world), Taiwan has been locked out of many regional trade pacts and world bodies over the years — mostly because of opposition from China.

The U.S.-Taiwanese relationship cannot be divorced from Taiwan’s big superpower neighbor, China, which still views the island as a breakaway province, even though cross-strait economic ties have improved markedly over the last five years.

In 1979, the United States established formal relations with the People’s Republic of China and swapped diplomatic recognition of Taiwan (Republic of China) for an unofficial relationship underpinned by the Taiwan Relations Act. A bustling trade in goods, services and people has since flourished in this zone of ambiguity.

At the same time, China still looms large over the relationship. Taiwanese officials, for example, are barred from visiting Washington out of U.S. political sensitivities with China. And although the United States maintains a policy of “strategic ambiguity” as to whether it would come to Taiwan’s defense if it was attacked by China, the island’s security has been a longstanding thorn between Washington and Beijing.

The Taiwan Relations Act legalizes U.S. arms sales to the island, and such sales have become a lucrative source of business. But they’ve also been subject to politics. Chinese objections kept both the Bush and Obama administrations from agreeing to Taiwan’s long-standing request to purchase new F-16 fighter jets. Instead, the United States offered a compromise to upgrade Taiwan’s fleet of 145 older-model F-16 fighters as part of a projected $3.7 billion defense deal.

Hammond-Chambers shook his head at my suggestion that the council’s support for U.S. arms sales to Taiwan may draw China’s ire. “We don’t want to incur the wrath of China — there’s no reason that we should. We do a lot of work that the Chinese, based on their statements, would view to be in their national interests,” he said, alluding to China’s strategy of a “peaceful rise” through robust growth.

Wolfowitz was equally clear-eyed on arms sales. “Having dealt with this from the U.S. government side for many years, my own feeling is that it’s important to sustain a reasonable level of arms sales to Taiwan [and] it’s actually a requirement under U.S. law.”

Not disclosing the identity of its corporate members is another way the US-Taiwan Business Council sticks to business and stays out of politics. “That’s a very important way for our companies to feel comfortable about supporting their broader interests without feeling they may be drawn into U.S.-China disagreements over Taiwan,” Hammond-Chambers said.

The US-Taiwan Business Council was formed in 1976 by David Matthew Kennedy, a former treasury secretary under President Nixon. Kennedy had been impressed with Taiwan’s economic development and felt that a private business council, with a counterpart organization on the island, could further promote economic growth. He also foresaw that when the United States would switch diplomatic allegiance formally to China, a private business council would probably play an even more important role in U.S.-Taiwan relations.

Hammond-Chambers came to the council as a 25-year-old staffer eager to put his passion for technology to good use in Washington. Taiwan, a fertile ground for tech firms, ended up being a good fit. He did not have much of a background in Taiwan then, but took to the people and culture so that he now speaks with a near-evangelical fervor about the country.

“My experience as an immigrant … the people here are very positive and outgoing,” he said. “Taiwan’s like that. I think Americans, when they get exposed to Taiwanese, connect.”

The task before Hammond-Chambers as he took the reins of the council in 2000 at age 31 was to translate this belief into policy results. The US-Taiwan Business Council, like thousands of other groups in Washington, is, at heart, a lobby. It lobbies for closer bilateral business ties on behalf of its corporate members, over 95 percent of which are American firms, according to Hammond-Chambers. (Corporate-level memberships run $7,500 a year while a Chairman’s Circle-level membership costs $15,000 annually.)

I asked him what the name of the game was in making the council’s voice heard on Capitol Hill.

“Discretion,” he said. “It’s not an attempt to hide things from people or to do backroom deals or anything like that, but simply to try and find common ground.” Finding common ground is often easy “because one of the wonderful things about this job and this relationship is that it truly is bipartisan. Democrats and Republicans both feel very strongly and positively about Taiwan,” he added.

But while the council has strained to keep out of Taiwanese politics, sometimes the latter have come to Washington uninvited. Just a few years ago, Taiwan’s two main political parties were known for their public spats on Capitol Hill over U.S. support.

“It was very unpleasant and very counterproductive,” Hammond-Chambers said. “It is quite shark-infested waters, U.S.-Taiwan-China relations,” he added, in that the words of everyone involved can be twisted and misinterpreted. That’s why only he or Wolfowitz are allowed to make public statements. “Branding is everything. You can screw up one time and you are going to pay a heavy cost,’ Hammond-Chambers said.

But despite Taiwan’s perennial risk of being swept up in Sino-American rivalry, its meteoric economic rise is enough to make the chairman’s message resonate on Capitol Hill. Taiwan is “well on the way to becoming a highly developed country,” Wolfowitz said. “It’s a miracle story in that regard. Taiwan and South Korea really parted the way for everyone else, including China, at a time when there was a certain pessimism that poor countries could ever become developed.”

Sean Lyngaas is a freelance writer in Washington, D.C.