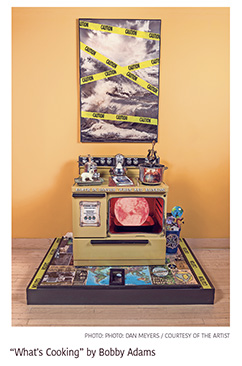 Climate change is usually viewed as a scientific issue or a political debate, at least in the United States where President Trump and his minions deny climate change is real despite the overwhelming evidence.

Climate change is just one of the myriad threats to our planet that artists are addressing — or confronting — in their work, and it couldn’t be more timely as Australia burns, icebergs melt and islands sink under rising seas. With the 50th anniversary of Earth Day taking place this April, the American Visionary Art Museum’s latest exhibition brings together a diverse group of artists whose work celebrates nature and sounds a clarion call about our persistent apathy and obstinance in the face of worldwide environmental calamity.

“The Secret Life of Earth: Alive! Awake! (and Possibly Really Angry!),” which marks the Baltimore museum’s 25th anniversary year, features nearly 90 pieces of art by self-taught painters, photographers, fabric artists and sculptors. Alongside the art, the exhibition aims to give viewers an entertaining but educational “crash course” on the intricacies of earth’s ecosystems and the rapidly changing state of its climate with a plethora of facts, trivia and science, including hopeful stories of innovative solutions to balance out the warnings of pending environmental doom. 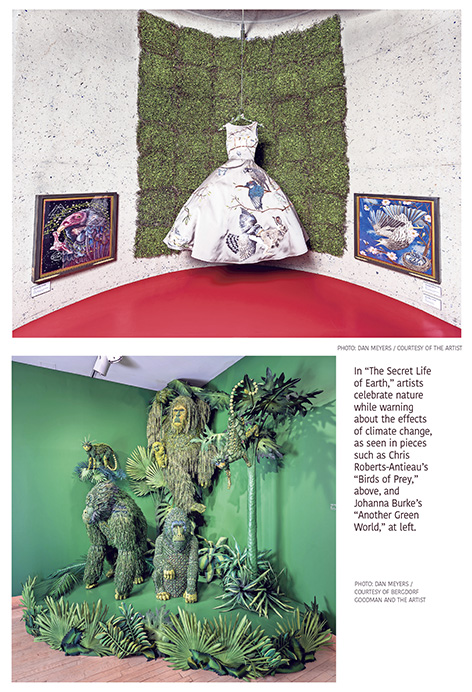 The exhibition has good intentions but an uneven scattershot execution with half of the small amount of gallery space wasted on a site-specific installation that spouts platitudes about positivity. However, the exhibition opens with a flourish with a formal white silk gown ornately embroidered with two birds, but these aren’t peaceful doves or brightly hued lovebirds. One hawk is ready to sink its talons into a fleeing hare while another has killed a smaller bird on a branch with a talon sunk into its bloody broken neck. “Birds of Prey” by Chris Roberts-Antieau stirs conflicting emotions, revealing both the beauty and cruelty in the kill-or-be-killed natural world.

Around the corner, a sextet of vividly green but remarkably lifelike apes and monkeys hang from trees or sit on their haunches in a vibrant green jungle fashioned from dried plants, rhinestones and other colorful found objects. Johanna Burke’s “Another Green World” celebrates the majesty of our closest cousins and their familial bonds to each other. The installation was commissioned by the Bergdorf Goodman luxury department store in New York City, where Burke works as a fabricator, for a 2016 holiday window display. She said the work was inspired by “1960s psychedelic art, the paintings of Louis Wain, Indian block prints and all manner of decorative patterns.”

Another installation titled “What’s Cooking” by Baltimore artist Bobby Adams most directly confronts climate change in a humorous and powerful telling. A glowing red globe is stuffed inside a 1970s vintage yellow oven beneath the words “EARTH IN DANGER WHEN RED BLINKING.” A toy penguin, giraffe and monkey are being cooked in pots on the range next to a melting Salvador Dalí-esque clock. This exhibition is filled with wall text about the numbing statistics of climate change, but Adams’s work brings those abstract numbers to life. Sometimes humor can provide a pathway around apathy toward some desire for action.

Unfortunately, the largest gallery in the exhibition is wasted on a site-specific installation titled “RELEASE” by artist and Rāja yoga practitioner Santiago Navila. Taut strips of fabric stretch in panels across the gallery with a video projected through one of the panels in the center of the room. The video begins with a news segment about the great garbage patch of floating plastic in the Pacific Ocean but then veers into stock footage of dolphins, wildebeest and random disjointed nature scenes. A voiceover murmurs, “How can I free my mind? How can I create a positive world? Let go. The past is the past…” and so on. Even though it’s a site-specific installation tailored to this exhibition, it feels like an off-the-rack New Age-ish reduction of mindfulness to some trite phrases that aren’t really connected to nature or anything else.

Back in the first gallery of the exhibition, teen activist Greta Thunberg talks about the dangers of climate change in a video of an interview on “The Daily Show.” Thunberg has a refreshingly direct and confrontational approach of calling out world leaders (especially Trump and his ilk) for their refusal to tackle climate change. Her demands for action raise a generational divide where youth are rightfully angry about the refusal of their elders to take any meaningful actions about climate change, which will burden future generations long after the baby boomers are dead and gone.

Toward that end, there’s also a disconnect between the exhibition’s environmental focus and some of the American Visionary Art Museum’s own practices. I counted three paper towel dispensers (and no hand dryer) in one men’s bathroom. A museum shouldn’t bemoan the destruction of the Earth’s habitat in an exhibition and then contribute to it in its own bathrooms.

While there is strong work on display, the exhibition’s title aptly reveals its lack of focus or clear intent. The Earth has always been alive(!) and awake(!), and what secret life is being revealed? The Earth is literally on fire and there’s nothing secret about it.