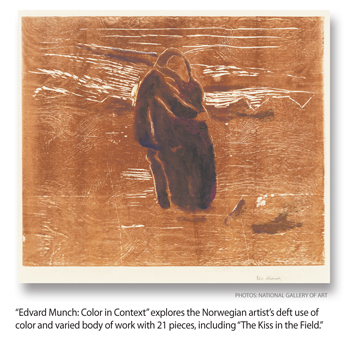 Since his death in 1944, Edvard Munch’s expansive body of artwork has been reduced to just one lonely scream.

While “The Scream” is a masterpiece of existential angst and brooding expressionist style, Munch was an extremely prolific artist, and most of his work has been ignored by the public. When the Norwegian artist died at his estate near Oslo, he was an 80-year-old unmarried recluse with no children. When authorities entered a locked room on the second floor, they found a stunning collection of more than 1,000 paintings, 4,400 drawings and 15,000 prints.

In an intimate exhibition filling two small galleries, the National Gallery of Art features 21 prints in “Edvard Munch: Color in Context,” including color woodcuts and lithographs. The exhibition examines the relationship between Munch’s work and the meanings ascribed to assorted colors by spiritualist principles, which developed in the late 19th century in reaction to rapid-fire scientific advances that posed unsettling questions that branched into metaphysical realms. If recently discovered X-rays could see through a body, then where did the spirit reside? If science trumped religion, then what happened to the soul and departed ancestors beyond that dark curtain separating the living from the dead? 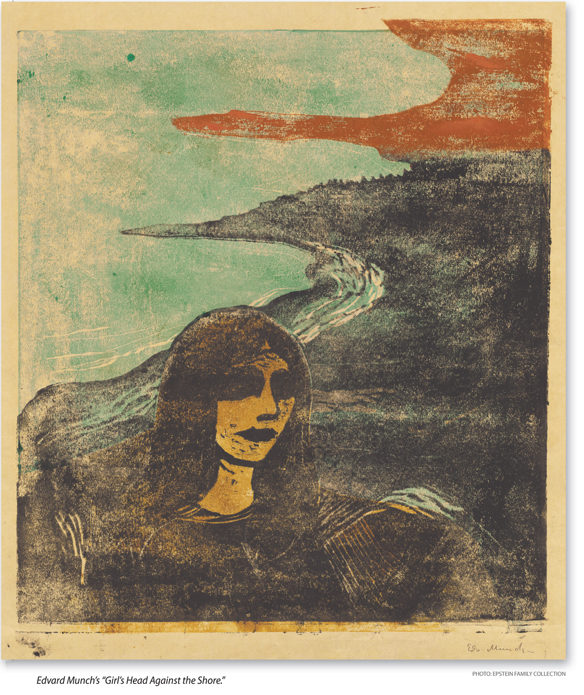 Munch experimented with cameras and double exposures in self-portraits in his studio, a technique also used by hoaxsters to create “spirit” photos. In England, two girls used illustrated paper cut-outs to create photos of “fairies,” which they claimed were real visitors from another realm. The photos captivated a growing audience of spiritualists, including Arthur Conan Doyle, author of the “Sherlock Holmes” series. Doyle used less deductive reasoning than his famous detective while enthusiastically promoting the photos as authentic in a widely read article in The Strand magazine in 1920. 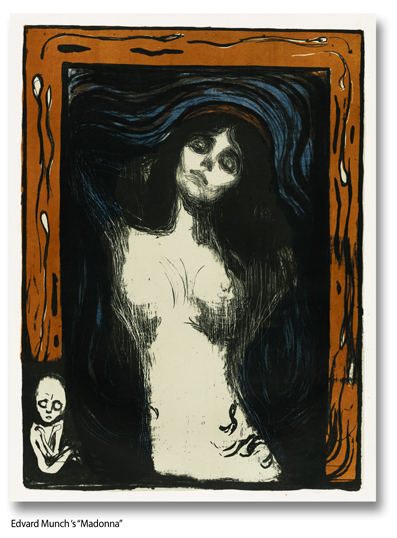 At the National Gallery, visitors can pick up a list displaying various colors and their associated meanings compiled from a 1901 spiritualist book called “Thought Forms,” a mystical notion that thoughts create their own colorful auras. Bluish-grey symbolized “religious feeling tinged with fear” while dark orange represented a “low type of intellect,” but the color associations are both simplistic and impossibly specific. Five slightly different shades of red are supposed to convey very different emotional states, including avarice, anger, sensuality, pride and pure affection.

Many of the prints are dark and brooding, evoking unsettling psychological states and unknown circumstances. In “Melancholy,” a woman concealed beneath a deep red dress holds her head in her hands as her jet-black hair merges into the darkened shore around her, making her seem both monumental and mysterious. Is she grieving for a lost lover or for herself? In “Melancholy III,” a sorrowful man rests his head on his hand on another black expanse of beach where the only respite from the gloom is a small white house in the distance, but the man seems disconnected from any semblance of home. 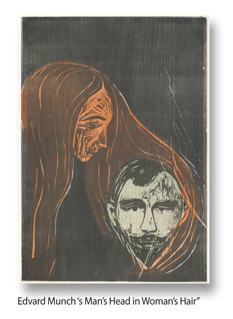 A color lithograph and a color woodcut both titled “Anxiety” offer a fascinating window into an artist’s development of one scene. In the lithograph, a group of finely dressed men in top hats and women wearing bonnets stand in front of rolling hills and boats floating in a harbor beneath a maroon sky. They are staring directly at the viewer but not in a threatening manner. Their lips are pursed, their faces taut with worry, and they seem to be expecting an answer to an unknown question. The viewer becomes part of the scene, an accomplice in a story that is still unfolding. The color woodcut is a much rougher treatment of a similar scene, in part because of the limitations of the medium. An array of disembodied faces seems to float as their bodies are subsumed by a blackened landscape, creating a sense of foreboding without the anticipation or narrative.

While the exhibition is thoughtfully arranged, National Gallery curator Jonathan Bober uses a heavy hand in pushing the spiritualist color theme to define Munch’s palette. While Munch claimed he could see auras of energy emitting from certain colors, he never defined himself as a spiritualist and was not a vocal supporter. Munch was already in his late 30s when “Thought Forms” was published. The exhibition’s wall text states that “Munch claimed to select his colors at random,” which needlessly casts a cloud of doubt over an artist’s statements about his own work. No one can definitively say why Munch chose certain colors other than Munch himself. He may have been fascinated by spiritualist influences just like many other artists of his day, but that doesn’t mean he surrendered his control to a table of colors printed in a book.