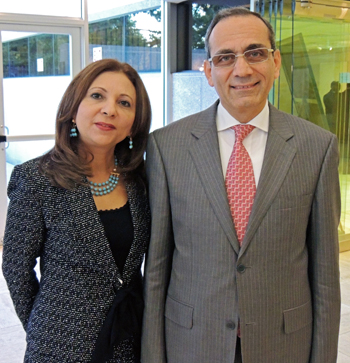 Amani Amin and her husband, Egyptian Ambassador Mohamed M. Tawfik, seen above at an exhibit of contemporary Egyptian artists held at the embassy last year, are both writers. He has written two novels, and she runs the website Arab World Books.

She’s a dentist, the mother of two grown young men who now live in Australia, and the wife of Egypt’s first new ambassador in Washington since the country’s revolution. But Amani Amin is also an editor, writer and the webmaster of a site that in many ways serves as her own outlet for the profound changes sweeping her homeland.

Today, as she and her husband, Ambassador Mohamed M. Tawfik, represent a nation in the midst of a historic and uncertain transition, Amin remains fiercely devoted to Arab World Books, the popular website she created 14 years ago.

Amani Amin and her husband, Egyptian Ambassador Mohamed M. Tawfik, seen above at an exhibit of contemporary Egyptian artists held at the embassy last year, are both writers. He has written two novels, and she runs the website Arab World Books.

Covering Egyptian, Arab and Mideast writing, Arab World Books is a free online bookstore, a center to exchange ideas, and a self-described “cultural club” that currently has 15,000 members. Its stated aim is to promote cross-cultural dialogue — in Arabic and English — by showcasing articles, stories and poetry, as well as individual dossiers for Arab writers, book discussions, a creative writing workshop and a readers’ club.

Whether she’s working as a dentist back in Cairo or adjusting to a new diplomatic schedule in top postings like Washington, Amin said she still feels very responsible for her website, which she calls “my baby.”

“I spend about four hours a day on Arab World Books,” she told us, “but could spend much more time. Already, with so much to do here, I am cutting back the book club to feature one book every other month instead of a monthly feature.”

But if anyone can keep it going, Amin can — backed by her husband, a career diplomat who also dabbles in writing (he’s authored two novels and three volumes of short stories in Arabic).

“I’m the optimist in the family,” said Amin, who noted that Arab women can use their maiden names and that she chose not to use her husband’s name. “It’s a ‘package’ — always is.”

Today, the couple will need all the optimism they can muster in the wake of ongoing political turbulence back home. Tawfik is Egypt’s first new ambassador in Washington since the Arab Spring protests in January 2011 that disposed former dictator Hosni Mubarak and replaced him with Cairo’s first democratically elected president, Mohamed Morsi of the once-banned Muslim Brotherhood (also see Tawfik’s cover profile, “New Envoy Says Egypt Has Turned Page on Dictatorship,” in the November 2012 issue of The Washington Diplomat).

Since he and Amin arrived here last September, however, the Arab world’s most populous nation has lurched from one crisis to another. In December, Morsi’s Islamist allies rammed through a long-stalled constitution, sparking a backlash by liberal activists and others who say the Muslim Brotherhood is beginning to resemble the dictatorship they fought to bring down. And although the Brotherhood retains a strong base of grassroots support, pitched street battles in early 2013 seriously challenged its authority, forcing Morsi to declare a state of emergency in three cities.

Things appear to have simmered down, for now. But it remains to be seen if the Muslim Brotherhood, its secular opponents and loyalists of the old guard can finally come together to rebuild the beleaguered country two years after its revolution stunned the world. Ousting the Mubarak regime after 30 years in power was a seminal event in the history of Egypt, whose future, Amin points out, has not yet been written.

“It’s understandable to want to know what happened and what will happen, but even Egyptians aren’t sure what happened. It is unpredictable and everyone is wondering,” Amin said. “We had 40 years of predictability and no one is comfortable with unpredictability. This is a transitional period after undergoing a revolution, hopefully for the better.”

Ever the optimist, though, Amin is confident that she and her husband will represent Egypt well during its transition. “Don’t worry about us — even if we’re not achieving what we want now, we will proceed … we are gaining our voice and starting to believe we have the power to change,” she said. “The coin always has two sides.”

And despite the strained relations between Egypt and the United States, Amin said both are excited to be in Washington.

“It’s the highest post — who wouldn’t want to be here,” she said. “It’s a challenge, but it doesn’t scare us.”

“I think my husband can do well and be one of our very best” ambassadors in Washington, she added, calling him the “perfect diplomat.” 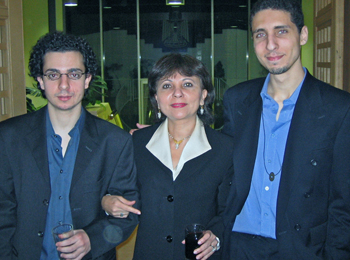 Amani Amin stands with her two sons, 29-year-old Mostafa, left, and 27-year-old Amr, both of whom live in Australia, where their father served as Egypt’s ambassador from 2004 to 2008.

Even so, she admits there are some traits in her husband that she’s less than fond of. “For me, he is too reserved. When we met he was more bohemian, hippie — like a writer. I hope when we retire he loosens up, becomes more bohemian again.”

In Egypt, Foreign Service officers tend to retire at 60, so at age 56, Tawfik only has a few years to go. Perhaps, more writing is indeed in his future. His most colorful book is “Murder in the Tower of Happiness,” a crime thriller about a beautiful young actress’s murder that he wrote in Arabic and translated into English.

Amin herself has written numerous articles, ranging from book and movie reviews to explorations of the Internet and the future of Egyptian culture. Her work has appeared in major Egyptian newspapers and literary magazines. She has also translated several literary works from Arabic into English and vice versa.

Although Arab World Books focuses on Arab writing, she notes that it does not exclude other faiths. “Mohamed and I are both Muslim,” she explained, “AWB is about Arab culture. While religion is part of our culture — in our region this would mean all religions — we do not focus on any one aspect. The one rule our editors follow strictly is that we do not publish any material that may be offensive to any race or faith.”

Amin and Tawfik met while in graduate school at Cairo University, where she studied dentistry and he studied civil engineering and then international law before joining the Foreign Service.

Prior to coming to Washington, they were posted in Lebanon, where Tawfik was the ambassador. Three months into that assignment, they found out they would be dispatched to either to New York or Washington. When they learned it was the latter, they were thrilled.

“It was like coming back home again … no homework on the plane, no preparation. It just seemed like a time warp remembering when the children were so young,” Amin said.

That’s because Tawfik had served in Washington as third and second secretary at the Egyptian Embassy from 1986 to 1990 while she watched over their two young boys. At the time, Mostafa was a toddler and Amr was only a baby. They lived in an Annandale, Va., garden apartment where she fell in love with the area’s greenery.

“I loved that first posting to Washington,” she said, reminiscing about “the blue sky, green grass and water.”

“I have always loved the fresh outdoors from the time I was a little girl,” she added. “I hated to come back to Cairo to go back to school.”

Even today, Amin said she’s not a fan of Egypt’s harried capital city. “Since I was a kid, I hated the smoke, pollution. I hate concrete.”

She said that sometimes she’s even tempted to go back to that old garden apartment in Virginia and “knock on the door and say hello to the new owner because I am homesick for those times.”

“Washington today seems a lot cleaner, with many more new or renovated buildings. It’s more crowded and there are more museums. The [Southwest] Waterfront is all new; it used to be a garbage dump and there were many more places you couldn’t go in town,” she recalled.

“I am definitely a Washington fan — there is so much greenery here. This city is a comfortable place to live, full of culture and it’s international and cosmopolitan,” she said, comparing it to Australia. “I was a Canberra fan. Canberra is the capital but it’s like a small town in comparison to Sydney, which is a big city, like New York.”

Amin got to know Australia while Tawfik was ambassador there from 2004 to 2008. Today, it’s home to 29-year-old Mostafa and 27-year-old Amr.

Of course, she misses her sons and wishes they weren’t so far away. “I’m afraid we’re losing them to Australia,” she says, though she admits it is a “stunning country.”

“That’s what sometimes happens when you get a posting and your children stay behind for school,” she said. “The hardest thing is that they are 15 hours ahead of us. So the best time to reach them is our Saturday and Sunday evenings, their weekend mornings. Of course, we Skype so at least we can see each other.

“As their mom, I hope they get very good jobs that bring them closer to perhaps Europe or an Arab country where they would only be a five-hour flight away instead of the 25 to 35 hours of travel time they have now,” she said.

Mostafa is currently a management consultant with Ernst & Young, while Amr “is the artist in the family” who first got his bachelor’s degree in digital arts and animation and now works in special effects as a video editor. “As a young boy, he was fascinated with cartoons, whether they were in German or French, Arabic or any other language,” Amin noted.

“All their interests are far from my science and medical background in dental school,” she said, “and my husband’s in civil engineering and international law.”

In between their various postings over the years in places like Beirut, Geneva and Harare, they would return home to Cairo. Each time, she resumed her dental work as a senior dentist at the Center for Medical Care in Cairo.

Amin said she became interested in writing because her husband was a writer. “Hard to resist when you’re married to one,” she said.

As a seasoned editor, she thinks her husband is a “great writer and a great diplomat with a ‘double personality.’ He’s a Gemini and they are supposed to do more than one thing well at a time,” she said only half-jokingly.

Amin also thinks their personalities are a good match — both reserved and quiet.

“One thing we adore about Washington is this town’s early evenings,” she said. “Here, you can go to a black-tie event, dance, eat, drink, participate in the auction and speak with people and still be home by 10 o’clock. That suits our style of living — more relaxed. I don’t like crowds, noise. In fact, I’m very happy staying at home, reading. I know this is very different than Cairo when everyone eats late and stays up so late.”