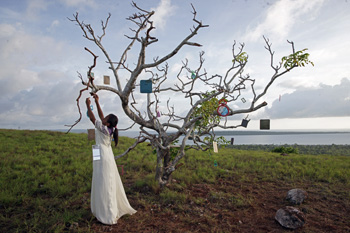 A young girl must come to grips with her father’s death in “The Mirror Never Lies,” one of 190 films featured in the 21st annual Environmental Film Festival in the Nation’s Capital.

As the dormant debate over climate change heats up again at the start of President Obama’s second term, an eye-opening environmental institution returns just in time to the nation’s capital this month.

The gargantuan Environmental Film Festival in the Nation’s Capital takes over area theaters March 12 to 24. The 21st edition of this annual extravaganza “will showcase a wide variety of films about environmental topics, including a special focus on rivers and watersheds throughout the world,” said Peter O’Brien, the festival’s executive director. “The festival is not only the largest environmental film festival, but also a major venue for the presentation of international film. Of the 190 films being screened in 2013, 85 are international, hailing from 50 different countries throughout the world,” he added.

“This is our biggest and most ambitious festival yet,” said Helen Strong, the festival’s public affairs director. “Each year that is true, but each year we grow over the previous year. The number and variety of films on the environment is constantly expanding.”

A staggering 110 titles are D.C., U.S. and world premieres. About 196 filmmakers and special guests are scheduled for talks accompanying festival screenings. One of Washington’s largest cultural collaborations, the festival partners with more than 100 area, national and worldwide organizations, with films playing at 75 area venues, including embassies, museums, universities, libraries and theaters.

The Environmental Film Festival opens with the world premiere of “Hot Water,” a documentary about uranium mines in western United States, with live appearances by filmmaker Elizabeth Kucinich and her husband, ex-Congressman Dennis Kucinich, a film subject. The festival’s annual Polly Krakora Award for artistry in film goes to Stuart Sender’s “Harmony,” a documentary narrated by Prince Charles, a longtime environmental advocate (whose own home near Highgrove House features an organic farm). And don’t miss the D.C. premiere of legendary director Terrence Malick’s “To the Wonder,” a narrative love story propelled by stunning images of nature.

Of special interest to readers of The Washington Diplomat are the following screenings presented by embassies in D.C., listed in chronological order.

Canadian writer-director Caroline Bâcle’s documentary “Lost Rivers” (Tue., March 12, 6 p.m. with discussion by Bâcle; Wed., March 13, 6 p.m.) examines the worldwide disappearance of rivers, which once flowed through nearly every developed city and provided the infrastructure upon which modern metropolises were built. Guiding viewers through the hidden river networks of London, Brescia (Italy), Montreal and Toronto, intrepid groups of subterranean explorers known as “drainers” reveal the buried waterways that house the secrets of each city’s past.
RSVP: canadianembassy-lostrivers.eventbrite.com

The program “The Rhine: From the Source to the Estuary” (Tue., March 12, 6:30 p.m.) includes the German documentaries “The Young and Wild Rhine – Switzerland*” and “The Tamed Rhine – Switzerland, Germany, France*” — followed by a tasting of regional Rhine food.
RSVP: was.events@eda.admin.ch

Embassy of the Republic of Indonesia

Kamila Andini’s narrative feature “The Mirror Never Lies” (Tue., March 12, 7 p.m.) draws upon her personal history with the Bajo tribe, known as the “Sea Gypsies.” The story centers around a 12-year-old girl who faces familial loss, goofy first love, conflict with her grieving and emotionally absent mother, her own blossoming womanhood and, eventually, her journey toward the acceptance of her father’s death.

Mexican director Pedro González-Rubio’s documentary “Inori” (Wed., March 13, 6:30 p.m.) follows the elderly residents of a picturesque and isolated mountain village in Japan who offer moving testimonies as they reflect on their histories and the cycles of life.
RSVP: jicc@ws.mofa.go.jp

Eric Youwei Lin’s documentary “Remember Chek Jawa” (Wed., March 13, 7 p.m.) examines the fate of a tiny yet amazingly rich area of marine biodiversity on Pulau Ubin Island in Singapore. The tiny nation-state has always struggled with land scarcity issues and the government had approved plans to reclaim this land, but several groups of passionate volunteers refused to give up on this precious slice of nature.
RSVP: Kelley_Rucker@sgmfa.gov.sg

Embassy of the Republic of Gabon

Henri Joseph Koumba-Bididi’s narrative feature for children, “The King’s Necklace” (Wed., March 13, 7 p.m.), makes its U.S. premiere, in association with the upcoming exhibition “Earth Matters: Land as Material and Metaphor in the Arts of Africa” at the National Museum of African Art.

In a remote community where life is cheap and people struggle to survive, one small Aboriginal boy shows how courage can conquer even the greatest odds in Catriona McKenzie’s documentary “Satellite Boy” (Thu., March 14, 7 p.m.).
RSVP: cultural.relationsUS@dfatgov.au

Michele Barca and Nicola Pittarello’s “The Challenge of Venice” (Thu., March 14, 7 p.m.) documents how the iconic city is inextricably linked to her salty, fresh and brackish waters, an inexhaustible resource that now threatens her very survival.
RSVP essential: http://iicwashington.info/events/20130314/20130314_venice.html

Simon Cunich discusses his documentary “Growing Change: A Journey Inside Venezuela’s Food Revolution” (Thu., March 14, 7 p.m.), about how a growing social movement is showing what’s possible when communities, not corporations, start to take control of food.

In Simon Franca’s documentary “Not So Modern Times” (Fri., March 15, 7 p.m.), an elderly native Tehuelche gaucho lives a solitary and contented life in a remote cabin in the Patagonian Andes — until he receives a television and telephone from the Ministry of Social Development that turn his life upside down.

(at National Museum of Women in the Arts)

“Margaret Mee and the Moonflower” (Mon., March 18, 7 p.m.), directed by Malu de Martino, looks at the life of botanical illustrator Margaret Mee, who lived for 36 years in Brazil, where she carried out expeditions to the Amazon rainforest and left a rare iconographic and artistic legacy.

Guillermo Corral, cultural counselor at the Embassy of Spain, introduces Óscar Clemente’s documentary “Keep On Rolling — The Dream Of The Automobile” (Tue., March 19, 6:30 p.m.), followed by discussion with sociologist Begoña Pernas. Clemente’s film argues it’s increasingly obvious that cars are ill-suited to big cities and that the social, economic and environmental costs they incur are no longer sustainable.

Franz Hafner’s “The Innside Story: The Green River from the Alps” (Tue., March 19, 6:30 p.m.) makes its D.C. premiere, followed by a discussion on renewable energy. Central Europe’s largest tributary of the Danube, the 323-mile Inn River’s legendary natural beauty has generated unique cultural regions over the ages, but today, signs of massive human intervention are clearly apparent all along the Inn’s course.
RSVP: www.acfdc.org/events-registration

“Tale of a Forest” (Wed., March 20, 6:30 p.m.), directed by Ville Suhonen and Kim Saarniluoto, celebrates the unique Finnish forest and its colorful and diverse inhabitants, from the bears and elk, to the snakes and flying squirrels, all of whom are characters in this family flick.

“A Thirsty World” (Wed., March 20, 7 p.m.), directed by Yann Arthus-Bertrand, Thierry Piantanida and Baptiste Rouget-Luchaire, focuses on one of the major challenges to human survival: water. Filmed in 20 countries, the documentary reveals the mysterious and fascinating world of fresh water through spectacular aerial images shot in regions that are difficult to reach and rarely filmed, like Southern Sudan or Northern Congo.

Embassy of the Czech Republic

Martin Mareček’s documentary “Solar Eclipse” (Thu., March 21, 6:30 p.m.) explores the drawbacks of providing aid to developing nations through the story of two Czech electricians who brought electric power to a Zambian village, only to return five years later to find their ingeniously constructed system in ruins thanks to the villagers’ intervention.
RSVP: czech_events@yahoo.com and put EFF in the subject line.

Ben Sombogaart’s “The Storm” (Thu., March 21, 6:30 p.m.) is fictional story that unfolds within the historical context of the disastrous flood that engulfed the Dutch coastal province of Zeeland in 1953. The tragedy killed more than 1,800 people but also inspired the Dutch to find ways to strengthen their coastlines against future storms.
RSVP: DutchFilm@aol.com or (202) 274-2730