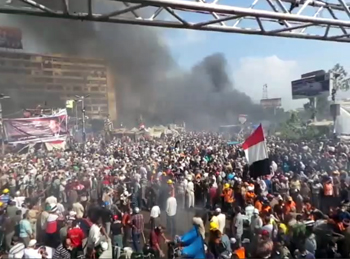 On June 24, 2012, the Muslim Brotherhood arguably reached its pinnacle of political accomplishment. A history of rulers from the pharaohs to Hosni Mubarak had been imposed on Egypt’s people, and while some like Gamal Abdel Nasser captured this Arab powerhouse’s imagination, none had been selected democratically. And when the people chose, it was the Brotherhood they had selected in the form of Mohamed Morsi, a former Egyptian lawmaker and member of the Brotherhood’s Guidance Bureau.

But since then, the Muslim Brotherhood, Egypt’s largest and oldest Islamist political and social movement, has experienced an epic fall from grace.

Mass protests in 2013 ousted the party from power. Hundreds of its supporters were killed. Thousands have been arrested. The group has been outlawed in the name of fighting terrorism, and Morsi, in jail facing a slew of charges, has been sentenced to death.

Muslim Brotherhood supporters are dispersed by security forces during an August 2013 protest at Rabaa, where an estimated 800 people were killed.

Despite the fact that Egypt’s Tahrir Square revolution ostensibly traded in one autocrat for another — military strongman Abdel Fattah al-Sisi, who took over for Morsi pledging a return to stability — there seems to be little love lost for the Muslim Brotherhood.

While in Cairo recently, many of the locals I spoke to said they had taken to the streets twice in recent history to protest. The first was on Jan. 25, 2011, to administer the fall of Mubarak. The second time was June 30, 2013, just days before Morsi was deposed by an Egyptian Armed Forces-led coup.

“On June 25, I was down on the street [protesting],” Salah Mohammad, 33, told The Washington Diplomat as he sat outside a café in Cairo’s Garden City neighborhood. He said he returned to the streets two years later and that this time he was “more excited” to see the Brotherhood ousted from power. “They were difficult,” Mohammad said, reflecting popular opinion about the Brotherhood in Egypt.

Even liberal or moderate activists who disagreed with the way Egypt’s first-ever democratically elected president was ousted felt Morsi and the Brotherhood did themselves few favors while in power.

Despite initial promises to be the president of all Egyptians and work to reach a consensus, critics say the Brotherhood worked to the contrary. In cabinet meetings, Morsi reportedly negotiated, discussed and settled pressing issues before turning around and declaring completely contradictory statements. This led many to believe that Morsi was simply taking orders from his higher-ups in the Brotherhood.

But Morsi and his supporters counter that the Muslim Brotherhood was continually being undermined behind the scenes by Egypt’s military and business elite, as well by wealthy Gulf states such as the United Arab Emirates. They cite leaked audio recordings that purportedly show senior Egyptian officials discussing Gulf-funded bank accounts belonging to an opposition movement as proof that the military and its Gulf backers instigated the protests against Morsi.

Yet public opposition to Morsi had been brewing for some time amid anger that he pushed through a new Islamist-dominated constitution while granting himself broad new powers.

As journalist Thanassis Cambanis wrote in his book “Once Upon A Revolution: An Egyptian Story”: “The most charitable explanation for the Muslim Brotherhood’s obstinacy was that long decades underground had ill prepared it for public life. After a history of state suppression and anti-Brotherhood propaganda, even a well-intentioned Brother might find it confusing to distinguish real criticism from propaganda…. Brothers also exhibited unmistakable signs of messianic fervor and religious primacy. Morsi declared repeatedly that God had blessed his group, so it couldn’t ever be all that wrong.” 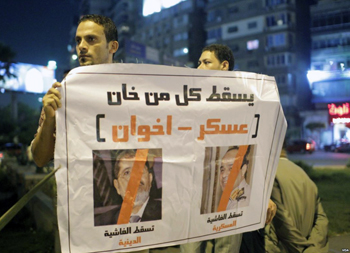 Photo credit for home page and above: Hamada Elrasam for VOA

A protester holds up a sign that reads “neither Morsi nor the military: Egypt’s Third Square Movement seeks an alternative vision for the future” during a July 2013 protest in Egypt. President Mohamed Morsi had been ousted in a military coup a month earlier.

But if God had blessed the group, his blessings quickly ran out on July 3, 2013, when Morsi was removed in a coup — clearly undemocratic but also clearly favored by a large section of the country’s population. A massacre at Rabaa of Brotherhood supporters and members followed a month later in which at least 800 people, largely unarmed, were killed by security forces. Compounding the misery suffered by the Brotherhood, an interim government declared the group a terrorist organization in December of that year.

It seems that this crackdown was just the start of a regional suppression of the group. Less than a year later, the United Arab Emirates lumped the local branch of the Muslim Brotherhood in with Syria’s al-Qaeda-affiliated al-Nusra Front and the infamous Islamic State (then ISIS) on its list of state-banned terrorist groups. When Zaki Bani Rushaid, the group’s deputy head in Jordan, criticized the UAE by stating that its rulers lacked legitimacy, he was promptly arrested. In February, he was sentenced to 18 months in prison.

The Brotherhood also lost a key backer when aspiring powerhouse Qatar — long seen as the group’s primary funder — quietly withdrew its support in the face of regional opposition. In September of last year, at least seven Brotherhood officials and clerics left the tiny Gulf kingdom nation in what experts said indicated a cooling of its backing. Qatar had increasingly found itself isolated from countries like Saudi Arabia and the UAE that support the Brotherhood’s expulsion from power and isolation from political life.

Qatari Foreign Minister Khalid al-Attiyah said in an interview with the London-based Arab daily Al-Hayat earlier this year that, “Qatar does not back the Brotherhood.”

In fact, the only place where support for a Brotherhood branch could be on the up is in Gaza, where polls conducted by the Palestinian Center for Policy and Survey claim support for local affiliate Hamas is at an all-time high following last summer’s war with Israel.

Egypt, though, is where the group has fallen most spectacularly. Many of the group’s members are dead, in jail, in exile or doing their best to keep a low profile. Some supporters in towns outside the capital still protest and are met with brutal repression tactics from Egyptian security forces.

When Morsi was initially elected, it was by slim margins — just under 52 percent. Additionally, many Egyptians voted for Morsi not because of his platform but despite it, instead seeing a vote for Morsi as a vote against his challenger, Ahmed Shafik. A former Egyptian prime minister under the Mubarak regime, Shafik was widely seen as a torchbearer for the previous government. Following Morsi’s actions in office — including declaring his presidential powers superior to the judiciary (largely appointed by and sympathetic to Mubarak) and showing public support for jihadists fighting in Syria — few Egyptians had faith in him or the Brotherhood. 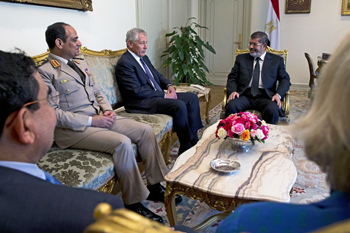 The sentiment in Egypt is that the Muslim Brotherhood could be on its last legs. But it has also been in this situation before. For decades, the Brotherhood bid its time and planned for a time to rule. Many view that as the reason it grabbed power so quickly following Mubarak’s fall. But this time there is a difference, as some of the group’s younger and more radical segments are tossing aside the tradition of nonviolence and calling for attacks against state figures. Some of these have been more symbolic than dangerous, including attacks on empty police vehicles. But discontent is certainly alive as these younger elements are less willing to go without challenging their exiled leaders based in Turkey.

In the meantime, attacks have gone up, though not necessarily by Brotherhood members. Militants affiliated with the Islamic State and other extremist groups have rocked the Sinai Peninsula, killed hundreds and caught Egyptian authorities flatfooted. Some of the insurgents are Morsi supporters, while others say they are retaliating against Sisi’s heavy-handed crackdown.

The verdict on Morsi’s successor is still out, especially if Sisi doesn’t usher in the economic turnaround that Egypt desperately needs. But Egyptians don’t seem eager to give the Brotherhood another chance, even assuming Sisi fails.

Abdallah Helmy, vice president of Egypt’s Reform and Development Party, said he estimated that if parliamentary elections were held today, the Muslim Brotherhood would only gather “10 to 15 percent” of the country’s votes. He said the group, once relied on for its charitable services but largely vilified in Egypt these days, is inspiring “paranoia” among the populace. “If they walk in again, there will be the same dilemmas and miseries.”

Justin Salhani (@JustinSalhani) is a freelance writer based in Washington, D.C., and Beirut.