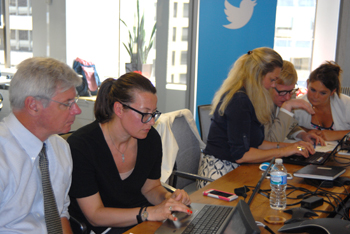 On a hot and steamy summer day last month, five Nordic ambassadors and their aides met in a ninth-floor conference room in D.C. to reach across the social media spectrum and discuss a very chilly topic: the Arctic.

The encounter took place shortly after the State Department hosted a reception to launch the two-year U.S. chairmanship of the eight-nation Arctic Council. But it also made diplomatic history for another reason: the one-hour gathering was the first time five ambassadors have ever gathered here for a Twitter town hall meeting on any subject.

Promoted via the #AskNordicAmbs hashtag and publicized online in Huffington Post and other media, the event generated nearly 650 questions tweeted by the public — on everything from cooperation with Russia on climate change, to oil drilling in Greenland, to the rights of indigenous people living north of the Arctic Circle.

And the ambassadors — sitting around a long conference table at Twitter’s Washington office on 15th Street, NW, hunched over their laptops — did their best to answer them.

“This shows how cooperation is the key for the future of digital diplomacy,” said Andreas Sandre, press and public affairs officer at the Italian Embassy, who earlier this year published a book on that very topic.

“Ambassadors, diplomats and the tech world are coming together to increase their level of engagement exponentially — at the same time offering different perspectives on common issues and challenges,” Sandre told us. “It’s good to see countries experimenting and trying different things.”

“The inspiration for this came from a Twitter town hall that I held with my U.S. counterpart in Denmark,” said Taksøe-Jensen. “The subject was U.S.-Danish relations, and we did it with the U.S. ambassador to Denmark, Rufus Gifford. He was in Copenhagen, I was here in D.C. We responded in cyberspace, and it lasted an hour. For us, the experience was incredible.”

Taksøe-Jensen later told his four Nordic colleagues in Washington about it, and they agreed to find a subject of mutual interest: the future of the Arctic.

“Since all five Nordic countries are members of the Arctic Council, we thought that would be a common denominator,” he told The Diplomat. “This is really a great way to put a focus on an issue and reach people who would not normally be among those who get in contact with diplomats. By using new lines of communication and social media, we hope to reach new audiences and get them interested in diplomacy.”

Norway’s Aas said climate change was the focus of many of the questions tweeted to him and his four Nordic colleagues.

“It’s one thing communicating our views and messages on the Arctic. But this is also a way of interacting with people concerned with what’s going on. It’s wonderful to be able to engage in this kind of interactive diplomacy.”

And no topic was more suitable for such an encounter than the Arctic, home to an estimated one-third of the world’s remaining oil and natural gas reserves. The rush to access those reserves has intensified now that climate change is opening up previously closed-off shipping lanes and offshore drilling sites. The territorial scramble has pitted Russia against the U.S. and its allies and cast a spotlight on the Arctic Council, an otherwise-mundane grouping intended to foster regional cooperation.

“Addressing and adapting to climate change is vital because it is happening at an accelerated pace in the Arctic,” Aas co-wrote in the Huffington Post article posted May 26, a week before the Nordic Twitter town hall. “The Arctic is warming twice as fast as the global average. This is mainly because melting snow and ice expose a darker surface, which increases the amount of solar energy absorbed. The regional warming leads to less sea ice, melting of glaciers and of the Greenland ice cap. Climate change in the Arctic affects the rest of the world with rising sea levels and changing weather patterns.” 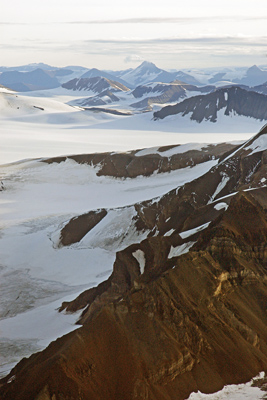 A view of the Arctic landscape is seen in 2009, during a visit by U.N. Secretary-General Ban Ki-moon to witness the impact of climate change on polar icebergs and glaciers.

Questions sent to the five ambassadors in the Twitter format of 140 characters or less ranged from “What can Nordic countries do to attract investments to the #Arctic? Are public-private funds an option?” to “When will the #indigenous @ArcticPeoples Secretariat be relocated to #Tromsø?”

In publicizing the plight of the Arctic via a medium like Twitter, it certainly helps that Scandinavia — which leads the world in per-capita income and quality of life indicators — also enjoys its highest Internet penetration rates. Some 96.5 percent of Iceland’s 335,000 people have Internet access, followed closely by Norway, Denmark, Finland and Sweden, according to Internet Live Stats.

“In Denmark, only those who choose not to be on the Internet aren’t,” Taksøe-Jensen said. “My mother is on the Internet; so is my mother-in-law. They had to learn how to use it. People are almost forced to communicate with government via Internet.”

Yet Iceland’s Haarde — like President Obama — is a relative newcomer to Twitter; the former Icelandic prime minister sent out his first tweet only three days before the town hall.

“This was an extremely interesting experience, and I had a lot of fun doing this,” said Haarde, who also previously served as Iceland’s foreign affairs and finance minister. “The Arctic is an issue people feel very strongly about, but there were no tweets I can recall that were hostile. It was more people seeking information. Doing it this way probably caught the attention of people who are on Twitter but normally don’t think about Arctic issues.”

Diplomacy has certainly come a long way from the days when a website was an embassy’s only real online presence.