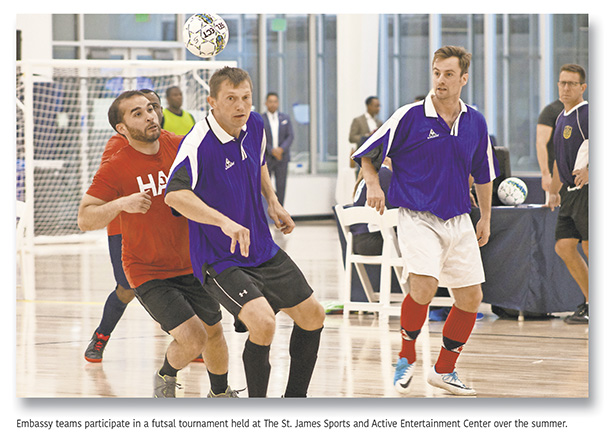 When you think of sports that bring athletes from different countries together, the Olympics instantly come to mind. In that same spirit of togetherness — tinged with a streak of competitiveness and national pride — local embassies often organize various sporting events in the name of fun, friendship and charity.

Sports diplomacy itself is a global endeavor, with an age-old track record that dates back to the first Olympics held in 776 B.C. As was the case in ancient Greece, it’s not easy to separate sports from politics. The result is not always pretty — the 1936 Olympics in Nazi Germany being a prime example — but more often than not, sports reveal the best of humanity and can bring even the bitterest rivals together (also see “Sports Diplomacy: Is It Just ‘War Minus the Shooting’ or More?” in the May 2018 issue of The Diplomat).

In the early 1970s, for instance, “Ping-Pong diplomacy” paved the way for renewed dialogue between Beijing and Washington and for President Richard Nixon’s historic visit to China. More recently, the détente between North and South Korea at the Pyeongchang Winter Games led to a political breakthrough in talks over the North’s nuclear weapons program.

The State Department continues to engage in sports exchange programs to foster goodwill abroad, hosting initiatives for underprivileged children and deploying famous athletes such as baseball Hall of Famer Cal Ripken Jr. and basketball star Shaquille O’Neal to countries such as Russia, China, the Philippines, Nicaragua, Ukraine and Lebanon.

Meanwhile, in D.C., local embassies often capitalize on Americans’ love of all things sports to promote their respective nations. And given its international character, the nation’s capital serves as an ideal arena for embassies to flex their soft diplomacy muscles.

Taking advantage of homegrown talent is an obvious way for embassies to connect with American fans. The Embassy of Poland, for instance, has hosted children’s camps led by Washington Wizard’s starting center — and Polish native — Marcin Gortat (now with the LA Clippers), whose MG13 Foundation hosts basketball camps for children back in Poland.

After the Caps won the 2018 Stanley Cup, Danish Ambassador Lars Gert Lose hosted a reception at his residence toasting fellow Dane and Caps center Lars Eller. And the Embassy of Canada — a country known for exporting hockey legends — is currently hosting “The 100 Greatest NHL Players,” an exhibition that pays tribute to a century’s worth of record holders, Stanley Cup champions and Hockey Hall of Famers (see story on page XX).

Embassies have also highlighted their connection to America’s favorite pastime, baseball. This past fall, the Japan Information & Cultural Center put on the exhibition “A New League” to showcase the historical ties between the U.S. and Japan shaped by baseball (also see “Embassy Exhibition Showcases Unique U.S.-Japan Relationship through Baseball” in the Diplomatic Pouch). Those links date to the 1880s, when Japanese high schools began developing baseball programs with the help of American educators. World War II put a stop to those baseball collaborations, but they quickly resumed during America’s postwar occupation of Japan.

Many Americans are aware of Japan’s affinity for baseball through famous Japanese-born Major League Baseball players such as Ichiro Suzuki and World Series MVP Award winner Hideki Matsui of the New York Yankees, whose nickname is Godzilla.

Other connections may not be as obvious. For example, Finland is not normally associated with baseball, but pesäpallo, a fast-moving bat-and-ball sport that is heavily influenced by American baseball, is considered Finland’s national pastime (also see “Finns Fly, Skate, Bat Their Way to Sports History” in the Diplomatic Pouch).

On that note, embassies frequently host events to introduce Americans to sports with which they may not be familiar. Last summer, the Embassy of Argentina participated in the first Argentina Heritage Polo Tournament in Poolesville, Md., to help raise funds for the largest pediatric hospital in Latin America.

Several years ago, the embassies of cricket-playing nations such as Bangladesh, Sri Lanka, Pakistan and South Africa held their own cricket tournament in Maryland. Played by millions across the planet, cricket remains on the fringes of American athletics, although that is slowly changing, particularly as immigrant communities from countries like India continue to expand. In fact, the U.S. Youth Cricket Association, based outside of Baltimore, Md., and the Washington Warriors Cricket Club have visited dozens of schools in Maryland and Virginia to sell educators on the merits of the sport.

And this past September, Washingtonians got a firsthand taste of Muay Thai, a combat boxing sport characterized by the combined use of fists, elbows, knees and shins. The Thai Embassy and the Tourism Authority of Thailand debuted “Rumble in D.C.,” a traditional Muay Thai match held at the Wilson Plaza outside the Ronald Reagan Building and International Trade Center. Spectators also witnessed a Wai Kru performance (a Thai ritual done before the match to show respect), sampled Thai cuisine from local vendors and got temporary Thai tattoos.

Like Muay Thai, many sports boast a global following but are only just now gaining ground in the U.S. While still not nearly as popular as football (the American kind), rugby — football’s rough-and-tumble British predecessor — is increasingly being embraced by Americans. The New Zealand Embassy has regularly held the Ambassador’s Shield, a tournament that pits New Zealand players against an American team, to introduce young Washingtonians to this Kiwi tradition (also see “Rugby, Cricket, Fencing, Other Sports Take on Traditional American Athletics” in the October 2012 issue).

“Sport is a universal language,” Philip Barton, then-deputy head of mission at the British Embassy, told us for the March 2013 article “The Right Moves: Exercise and Sports Define and Transcend Cultures.”

“Yes, it’s competitive, but each game is structured around universal rules and principles that apply equally whatever your linguistic or cultural heritage,” Barton said. “Talking about sports can break the ice in conversations between people from very different backgrounds.”

Perhaps the most universal sport around the world is, of course, soccer (i.e. football to pretty much everyone outside of the United States). The FIFA World Cup, held every four years and founded in 1930, is the most-watched sporting event on the planet. A microcosm of this year’s World Cup played out in D.C., where embassies such as Argentina and Great Britain held local viewing parties, while the D.C. Department of Parks and Recreation organized the D.C. Embassy World Cup, a local soccer tournament among 16 of the 32 nations competing in this year’s FIFA Cup (also see “D.C.’s Diplomatic Community Celebrates World Cup” in the Diplomatic Pouch).

A variant of soccer called futsal also drew diplomatic fans when it made its debut in the nation’s capital this fall. We took a closer look at the burgeoning sport of futsal, along with a beloved classic that show the enduring appeal of sports diplomacy.

Futsal Tournament at The St. James

An expansive new sport facility capitalized on the fervor surrounding the World Cup to introduce Washingtonians to a version of soccer with a twist.

Futsal is a sport that is played on a hard-court surface with five players on each time. Douglas Homer, director of soccer and futsal at The St. James, calls the sport a fast-paced technical form of soccer.

“However, if you ask a purist they’ll say it’s not soccer, it’s futsal,” he told us. “The goals are smaller than outdoor soccer goals but still big enough for a person.”

Courts can be wooden or made of artificial material with a plastic gripping surface. There is typically a referee and a timekeeper, and games are 40 minutes long with two halves of 20 minutes each. Sometimes, at the youth level, games are shortened.

“Futsal is fun, fast-paced and growing quickly around the world,” Homer said. “The U.S. is behind in terms of development of the sport.”

Countries where futsal is popular include Brazil, Uruguay, Spain, Portugal and parts of Eastern Europe. According to Homer, there’s also a growing popularity in the Asian market, with countries like China, Japan, Vietnam and Korea taking up futsal.

“It really doesn’t require much space [and is] played without limitation other than a climate-controlled environment,” Homer said.

With soccer, around 22 people are needed to play — 11 playing and 11 on the bench. Futsal only needs about half that.

At the diplomatic tournament held earlier this year, 10 nations signed up to play, including France, Chile, Zambia, Haiti, Angola, the U.S., Croatia and Spain. There was also a team from the World Bank that represented Italy and another team included employees from the Inter-American Development Bank. 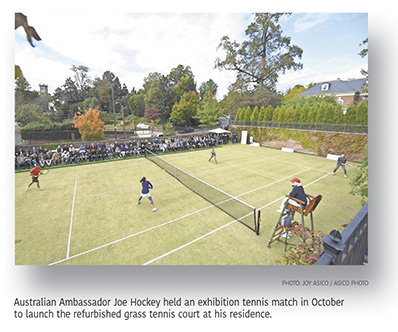 “It was exciting to see all the countries in one place,” Homer said. “It really felt like it brought people together in the spirit of sport and community.”

Angola and Italy faced off in the tournament’s final match, with Italy claiming the top prize after a 3-3 tie sent the match into a penalty-kick shootout. Everyone who participated in the tournament received a medal and jersey, while the top three teams were presented with a trophy. The tournament was such a success that Homer and The St. James hope to have another, most likely next spring.

Australian Ambassador Joe Hockey held an exhibition tennis match in late October to launch the refurbished grass tennis court at his residence, known as White Oaks. The court is the only one of its kind in Washington, D.C., and was refurbished with a donation from the Lowy family.

Two of the world’s tennis greats, Rod Laver and Fred Stolle, joined others at the ambassador’s residence at the Mateship Charity Tennis Event, which raised funds for the American Australian Associations’ Veterans Scholarship Fund.

Today, big-name tennis stars like Serena Williams, Roger Federer and Maria Sharapova have kept the sport relevant for younger generations. The game, in fact, can be traced to 12th-century France, where a ball was struck with the palm of a hand. It took another four centuries for people to figure out that rackets are more effective than hands. The modern iteration of tennis had its roots in late 19th-century England. Tens of millions of people continue to take up tennis around the world, and the sport’s Grand Slam tournaments attract legions of fans from Australia to the U.S.

“I think sports is a universal language,” Ambassador Hockey said. “The values of sports — competition, teamwork and fair play — help build trust and friendship between countries, bringing people together by setting aside differences and connecting people in ways they may not have been able to connect before.”

In addition to the October tennis match, the Embassy of Australia also hosted the 8th Annual Celebration of Rugby on Nov. 7. The event benefited Washington DC Youth Rugby, a nonprofit that uses rugby to promote health and physical fitness for underprivileged children in D.C.