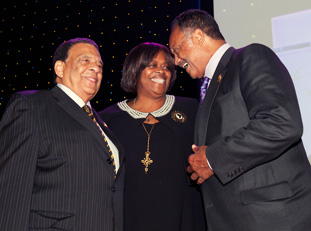 Sitting in her office at the State Department on a bright and unseasonably warm November day, Ambassador Suzan Johnson Cook explains the little detail of how her childhood home in the Bronx prepared her to serve as the current U.S. ambassador at large for international religious freedom.

“I was exposed to a number of faiths as a child growing up. On my apartment building’s floor there were 17 apartments; 11 of them were different ethnicities and religions. We grew up as friends, so really having an advantage in terms of understanding that we have to live together and respect one another’s differences, but always looking for common ground,” she said with a smile.

Navigating the politics and personalities of the Bronx might be child’s play though compared to what Johnson Cook, a prominent Christian pastor, faces as America’s chief proponent of religious freedom abroad, a job fraught with sensitivity that requires a deft diplomatic touch to effectively manage.

Johnson Cook leads the State Department’s Office of International Religious Freedom, which was created by Congress in 1998 in response to growing concerns of religious persecution throughout the world. The office publishes an annual report on global religious freedom, provides grants to nonprofits for religious freedom programming, and engages diplomats and civil society in discussions on how best to promote religious freedom.

Johnson Cook was sworn in May 16, only a day after she left her 21-year-long posting as chaplain in the New York Police Department. She also retired as senior pastor and CEO of the Bronx Christian Fellowship Baptist Church in New York City shortly before she was selected by President Barack Obama in April 2010 to lead the Office of International Religious Freedom. A holdup in the Senate though delayed her confirmation for a year. Some critics charged that she lacked the diplomatic experience to head up the office; others say the Obama administration itself wasn’t in a rush to fill the post, which had been vacant for two years — a reflection of the ongoing ambivalence within the U.S. government over how high a priority religious freedom, including the persecution of minorities, should be on the foreign policy and human rights agenda.

Regardless, since taking office, Johnson Cook says she’s had a full plate in front of her, though she isn’t daunted by the task of promoting religious freedom globally in the closing year of Obama’s first term — with limited State Department resources, in world of heightened religious tensions since the attacks of Sept. 11, 2001.

“You start when you start — you’re ready to do it. We’re committed to this issue,” she said, brushing off any concerns that her late arrival to the State Department would hinder the administration’s commitment to promoting and protecting religious freedom around the world.

Since arriving, she has traveled to four countries, including Turkey, where she joined Secretary of State Hillary Clinton in advocating for the implementation of U.N. Resolution 1618, which seeks to combat religious intolerance. To that end, Johnson Cook will be hosting a meeting of international experts in Washington in December — 20 countries have so far committed to attend.

She has also launched a strategic dialogue with civil society on the intersection between religion and foreign policy, engaged her diplomatic counterparts in Washington (she attended five Iftar dinners during the month of Ramadan), and worked with her 13-person team to raise the office’s profile.

But to her, much of the job is about listening to what government officials, religious leaders and representatives of civil society have to say — and listening is something she does well.

“Most of the time, I don’t do much of the talking because people have been ready to share. So just as we’ve been willing to have a conversation, there has been an ongoing conversation. What happens is that we’re now looking for bridges of common ground. They have been excited that there’s someone who is ready to not judge, but someone who is ready to receive and listen,” she said.

Her professional experience lends itself well to the task. Not only did she attend to religious needs and concerns for the New York Police Department’s 50,000 members, the only woman to hold that role, but at the same time she remained active at the Bronx Christian Fellowship Baptist Church, which she founded in 1996. She’s also the first woman and African American to hold her current posting.

“Both my past and my immediate past actually taught me how to build bridges and how to reach across waters where people may not be as familiar but where there are pragmatic openings where I can be given a chance to actually share my story. It’s in the sharing of the stories and finding common ground that doors have been opened. Those are the tools that you need in diplomatic relations,” she said.

Her substantial religious background and the symbolism of her appointment have enabled her to be more effective at her job, she added.

“They know, no matter what the faith is, that there is a collegiality, that there is an understanding of how religions work and there’s a respect. It has been embracing, I have been overwhelmed by the generosity of time and spirit that I have received. I have not had a bad meeting.”

But resistance to religious freedom around the world remains deep-seated. While Obama has spoken candidly of religion — in 2009, his Cairo speech touched upon religious tensions between the West and the Muslim world — persistent clashes between Shiites and Sunnis and others from Afghanistan to Iraq to Pakistan expose perhaps not a war within Islam, but certainly longstanding grievances among its various sects as well as a tug of war for influence.

Religious strife associated with U.S. allies such as Egypt and Saudi Arabia also exposes the strain that exists between America’s promotion of human rights and its broader strategic interests. (The State Department’s 2010 religious freedom report did list Saudi Arabia as a “country of particular concern,” but did not call out Pakistan or Egypt in the same way.)

Yet Johnson Cook’s office also highlights lesser-known acts of persecution and discriminatory laws and practices throughout the world, whether it’s Jehovah’s Witnesses and Scientologists facing bans on their religious literature in Russia, or the lack of legal recognition for Buddhist and Protestant faiths in parts of Vietnam, for example, all of which are highlighted in the extensive International Religious Freedom Report.

“In Iran, authorities continue to repress Sufi Muslims, evangelical Christians, Jews, Bahais, Sunnis, Ahmadis, and others who do not share the government’s religious views,” said Secretary of State Clinton at the 2010 report’s release in September. “In China, Tibetan Buddhists, Uighur Muslims, ‘house church’ Christians all suffer from government attempts to restrict their religious practice. In Eritrea last year, a 43-year-old evangelical Christian died in prison; he was reportedly tortured for 18 months and denied treatment for malaria because he refused to renounce his faith.”

“We’re very concerned about religious minorities around the world, as both the president and the secretary have articulated, but we also believe that since so much of the world is in transition, that presents challenges but it also presents opportunities for discussion, for urging governments as they become democratic to put into place laws that won’t discriminate and take care of those that have been violators. Make sure that not only is justice served, but that people can live freely with their expression with what they want to believe,” she said.

Johnson Cook cited both Liberia and Morocco as examples where different religious groups were able to overcome differences. In Liberia, she pointed out, women from various faiths were vital to brining peace to the war-torn West African nation. Morocco, she says, has taken “a number of progressive moves in terms of elevating women both politically as well as in their religious groups.”

“I am very intrigued by places that it has worked, that it is done well. We want to look at promising practices where people have resolved conflicts along religious lines and come together.”

The challenges Johnson Cook faces in the next 12 months aren’t only limited to the outside world, though. On the plus side, one of the original drafters of the law that created her office, Rep. Frank Wolf (R-Va.), is seeking to make international religious freedom a greater priority at the State Department by pushing for Johnson Cook’s office to be brought out from under the umbrella of the Bureau of Democracy, Human Rights and Labor and instead allow her to answer directly to Clinton.

On the flip side, there is continuing friction with the U.S. Commission on International Religious Freedom (USCIRF), which was created by the same 1998 law. According to some critics, it has exceeded its stated goals, complicated (or simply duplicated) the sensitive diplomatic work of the ambassador at large’s office, and become a self-serving bureaucracy that’s outlasted its usefulness.

Ironically, USCIRF has a larger budget and staff than the office led by Johnson Cook. Though its lifespan was supposed to be five years, in 2003 USCIRF received a reprieve and was supposed to wind down its work in September 2011. At the time of this writing, Congress is again debating whether to give it another two years to work.

“[T]he Commissioners are now more interested in maintaining their institution and their positions on the Commission (along with the concomitant prestige and diplomatic passports it provides them) than truly advancing the cause,” argues Joseph Grieboski, founder of the Institute on Religion and Public Policy, in an article for the Huffington Post.

If she has any problems with the nine-person commission, though, Johnson Cook is diplomatically not saying so. “There are differences of opinions, but in terms of working together, we have worked collaboratively since my appointment,” she said.

For now, Johnson Cook says she remains focused on the job at hand and hopes to travel more extensively in the coming year, including to the very countries that the 2010 religious freedom report cites as having room for improvement.

“There are lots of issues everywhere. It’s a complicated world,” she said. “We’re sitting with everyone that says it’s important to them.”