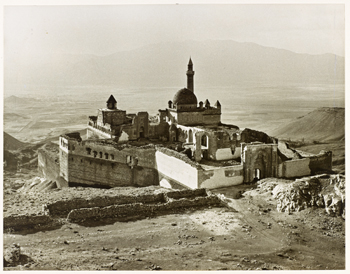 If a picture is worth a thousand words, then award-winning Turkish photographer Ara Güler’s more than 800,000 photographs present a visual novel of Anatolia and, more broadly, a rapidly developing country beautifully frozen in time.

“In Focus: Ara Güler’s Anatolia,” on display at the Arthur M. Sackler Gallery, reveals a selection of never-before-shown works by this prolific photographer known as the “eye of Istanbul” for his iconic depictions of Turkish street life in the 1950s and 1960s. While the Turkey of travel books never fails to include colorful photos of the Bosphorus and the Hagia Sophia, this D.C. exhibition features 21 photos of important sites across Anatolia, Turkey’s vast Asian mainland that is unknown to many tourists who travel to the republic. The photos barely feature humans but rather focus on historical and archeological monuments. They were carefully chosen to stimulate discussion around various themes, including magic, change and truth.

“I believe that photography is a form of magic, by means of which a moment of experience is seized for transmission to future generations,” Güler, who is now 85 and continues to live and work in Istanbul, was once quoted as saying.

Yet the photojournalist had conflicted feelings about photography as art; rather he saw his role as documentarian rather than artist. An economics major at Istanbul University, Güler first dabbled in cinema before working as a photojournalist for various publications starting in the 1950s, including Hayat (Life) magazine, Time Life, Paris Match and Smithsonian magazine. And while he also worked at Magnum Photos (alongside acclaimed photojournalist Henri Cartier-Bresson) producing stunning imagery, in his eyes he was a visual historian, chronicling the experiences and landscape of his country rather than creating art for art’s sake. He insisted that his photographs “aren’t normal photographs — they are press photographs … press photographers record the visual history of our time.” 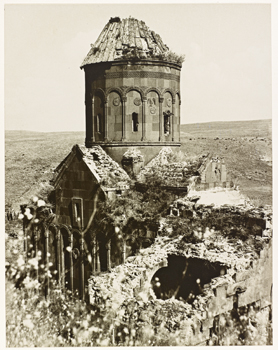 A relief on the Yakutiye Medresesi, a 14th-century madrasa in Erzurum

Almost resembling scenes from a fairy tale, the never-before-shown photographs capturing medieval Seljuk, Armenian and Ottoman monuments were taken by Güler in the early 1960s. Ringing true to his philosophy of photography as documentation, the photos look more like materials from an archive than his portraits of Salvador Dalí or Alfred Hitchcock, for example. But these historical treasures are just as brimming with life, such as the Ottoman-period İshak Paşa Palace in Doğubayazıt, a UNESCO World Heritage site. The exhibition also includes photos that pay testament to Güler’s roots as a member of Istanbul’s Armenian minority (his parents were Armenian) — for example, the 10th-century church and monastic complex, the Armenian Cathedral of the Holy Cross, and the Church of St. Gregory of Tigran Honents, which is situated in Ani near the tense Turkish-Armenian border. 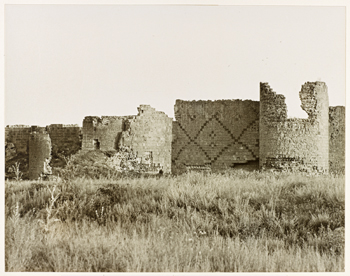 The Walls of Ani

In addition to the photographs, the exhibition features a seven-minute interview with the artist by FotoTV, which adds a voice to the visuals and helps visitors further understand Güler’s own definition of his career and purpose — whether we take it in as art or documentation.

The exhibition was curated by students in Johns Hopkins University’s Program in Museums and Society under the guidance of Nancy Micklewright, head of scholarly programs and publications at the Freer and Sackler Galleries. The silver gelatin prints are part of a set of 53 photographs featuring architectural monuments that were produced in 1965 and donated to the Freer and Sackler Archives in 1989 by former U.S. Ambassador to Turkey Raymond Hare. The career diplomat was always fascinated by the country’s architecture and received the photographs as a present from his colleagues at the end of his posting.