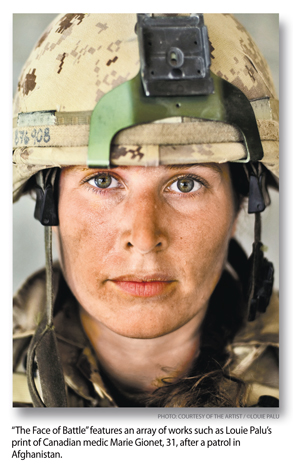 A powerful exhibition at the Smithsonian’s National Portrait Gallery explores the human dimension of modern warfare through the lens of six contemporary artists in a remarkable, poignant fashion that feels both urgent and timeless.

“The Face of Battle: Americans at War, 9/11 to Now” features an array of photographs, drawings and paintings that seek to explore the impact of combat on participants and those who remain at home. This show highlights six talented artists — Ashley Gilbertson, Tim Hetherington, Louie Palu, Stacy Pearsall, Emily Prince and Vincent Valdez — who have sought in their own ways to assess America’s military involvement since Sept. 11, 2001. As the country marks the 16th anniversary of the 9/11 attacks this month, the exhibition serves as a timely reminder of the human toll that the open-ended war on terrorism has extracted on tens of thousands of Americans, even as that war fades from the daily headlines.

“The main point of this show is to create a connection between the visitor and these men and women who have served us and served our country, and make sure they’re not forgotten and they’re recognized and honored,” National Portrait Gallery associate curator of painting and sculpture Dorothy Moss told The Washington Diplomat.

The museum wanted to feature artists who were “really concerned with the experience of families, the young men and women who were reintegrating into life after service, those who had experienced post-traumatic shock, and what that was like for their friends and community,” she said.

As a part of the museum’s “Portraiture Now” series, which spotlights new developments in the genre, the curators “thought it was the right time to address this topic — and in fact, it would be irresponsible not to,” Moss said.

“As a history, art and biography museum, we felt that it was really important to address the human experience of the ongoing conflicts, that our country has been at war now for quite awhile,” she said. “We as curators wanted to look at the human dimensions of that.”

The exhibition’s title is in honor of military historian John Keegan’s influential book “The Face of Battle: A Study of Agincourt, Waterloo and the Somme,” a work that shifted the focus from generals and strategy to the bloody reality of those fighting on the battlefield. In this show, that emphasis is reflected in the art on display, which delves deeply into the personal experiences of ordinary soldiers. 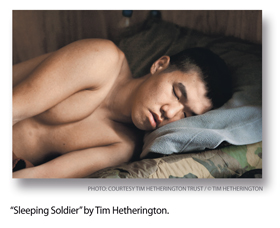 In one section, visitors come face to face with portraits of empty bedrooms, heartrending images of the way families have preserved these spaces almost as frozen monuments to those they lost. As Gilbertson wrote about this work, the purpose “is to honor these fallen — not simply as soldiers, marines, airmen, and seamen, but as sons, daughters, sisters, and brothers — and to remind us that before they fought, they lived, and they slept — just like us — at home.”

Each section of this exhibition is essential viewing. The work of Hetherington, who was killed covering the 2011 Libyan war, offers visitors a moment to reflect on timeless images of soldiers in camaraderie with his sensitive, intimate portraits of servicemembers in Afghanistan.

With Palu’s work, “he’s trying to get us past being desensitized to photojournalism, and to really look at the human in these photographs,” according to Moss. “He evokes empathy through his portrayals.”

“He knows these men and women he was embedded with very well,” she added. “He can smell them, he can hear their snoring when he looks at their photographs. He really wanted to bring their humanity to the forefront.”

The work of Pearsall — an Air Force photographer and Bronze Star recipient who has worked in more than 42 countries, including three tours in Iraq — is a reminder of the idiosyncrasies of war, as moments of terror punctuate long stretches of boredom and waiting. 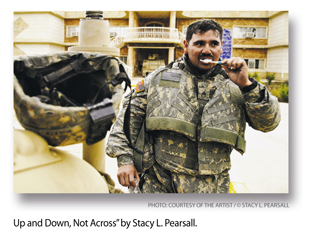 The show also features other types of media, including Valdez’s video installation in honor of his friend John, who committed suicide before his second tour of service, and the pencil-drawn portraits by Prince of thousands of fallen soldiers. “American Servicemen and Women Who Have Died in Iraq and Afghanistan (But Not Including the Wounded, nor the Iraqis, nor the Afghanis)” is a remarkable, ongoing project by Prince that starkly sketches the profound loss that comes from long-term war.

“At this point, all of us know someone who has served or have a family member who has served,” Moss said. “There is a deep connection between the visitors and what they’re seeing on the walls.”

That is reflected in the exhibition’s comment book, which is “just overflowing with emotional responses from visitors, many of whom thank people they know who have served,” she said.

Filled with images that linger long after visitors step outside the museum, this show is a moving, essential experience for anyone in Washington, D.C., where the politics of war often obscures its personal costs. As Moss said, “the faces become seared in your mind.”