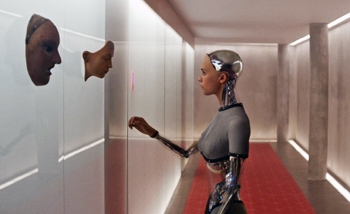 Also See: ‘Planetary’ and ‘Lambert and Stamp‘ and Repertory Notes

During the tech-friendly festival, the film’s promotional team lifted stills of its robotic main character Ava, played by Swedish actress Alicia Vikander, to create a fake profile on the dating app Tinder. Reflecting the film’s storyline, Ava on Tinder is purportedly a 25-year-old female but actually is a bot, which may have fooled some real-life Tinder users seeking a love connection. The buzz over the viral promotional stunt probably upstaged SXSW coverage of the film itself.

Garland’s previous film credits include writer of British director Danny Boyle’s “28 Days Later” and “Sunshine.” Like those movies, “Ex Machina” is similarly built on an intelligent script. The screenplay takes a deep plunge into tackling tricky philosophical questions including the boundaries of man playing God, what makes one human, etc. Garland’s stylish direction, mostly within the cramped confines of one house, deftly navigates the viewer through the thriller’s complicated plot twists. And the heady story of “Ex Machina” is brought to life by stunning performances from the principal cast members.

Irish actor Gleeson turns in a solid performance as Caleb, a young programmer working for a mammoth technology corporation best known for its web search tool that has tentacles reaching into many industries — a thinly veiled nod to real-life search giant Google’s vast dominance and wildly ambitious goals. Isaac (“Inside Llewyn Davis,” “A Most Violent Year”) fully inhabits the role of mythical billionaire Nathan, the chief executive of the company. (Both Isaac and Gleeson will soon become much more famous after playing in the next “Star Wars” franchise.) Vikander’s breathtaking portrayal of the humanoid Ava conveys how the robot uneasily treads the gulf between being a machine and desiring to be human.

For winning a company lottery, Caleb’s coveted prize is a week at the elusive CEO’s remote, secluded compound in the mountains. After Caleb arrives by helicopter, he is assigned to work on his genius boss’s latest project, Ava, a robot displaying stunningly advanced artificial intelligence, including AI’s holy grail of emotions. Caleb takes part in a Turing test to assess if Ava’s thoughts and words are human-like enough to fool another person into thinking she is human. In an homage to “Frankenstein,” Nathan’s creation Ava becomes smarter than both he and Caleb might imagine, leading to unanticipated consequences.

The San Francisco Bay Bridge is among the arresting images shot on location in multiple continents and many countries from around the world for the documentary “Planetary.”

A receptive audience at South by Southwest (SXSW) welcomed the world-premiere screening of the epic documentary “Planetary,” accompanied by lively discussions with British director-producer Guy Reid, screenwriter Steve Kennedy, cinematographer Christopher Ferstad and subject Ronald Garan, a former U.S. astronaut. “Planetary” subsequently made its D.C. premiere at the National Geographic Society in late March, followed by a theatrical release at the AFI Silver Theatre and Vimeo On Demand on Earth Day, April 22.

In the vein of Godfrey Reggio’s “Koyaanisqatsi” and Ron Fricke’s “Baraka,” “Planetary” acts as a stirring visual poem driven by awe-inspiring widescreen photography shot on location in multiple continents and many countries from around the Earth — plus footage from outer space, reaching far into the Milky Way. A variety of interviews of notable figures complement Ferstad’s stunning imagery to tell Kennedy’s story. NASA astronauts Garan and Mae Jemison — the latter known for being the first female African American astronaut — recall that from outer space, they felt an overwhelming sense of how the Earth is truly one unified entity. Their understanding of the world’s interconnectedness far surpassed their previous, more abstract notion of the concept.

Other distinguished interview subjects include anthropologist Wade Davis; the head of the Tibetan Buddhist Kagyu school; National Geographic explorer Elizabeth Lindsey; and environmentalist Bill McKibben. The film may have benefited from fewer talking heads, giving the amazing imagery more of a chance to speak for itself. Nonetheless, the interview subjects do deliver meaningful remarks, including repeated assertions that humankind cannot indefinitely continue down the path we have taken of rapid modernization.

Their messages share a common thread: The world, its people and nature are all connected. A noteworthy observation is that the strong sense of individual self is a relatively recent notion in human history, taking hold in (mostly Western) society over the last few hundred years. As a result, in modern times, an individual person or group’s decisions are too often made without regard for the needs of others, including future stakeholders. Individual actions can create wide-ranging, often unintended impacts across the world.

A very important example is how the major actors and (frequently multinational) corporations driving human growth may not give proper consideration to the deleterious effects of unsustainable development on the environment. Such shortsightedness will damage the health of our fellow citizens and deprive our descendants of critical natural resources in the future. The film posits that only by working together and considering all perspectives can humans come to a resolution and make progress in solving the world’s major, seemingly insurmountable problems, such as saving the Earth’s environment. 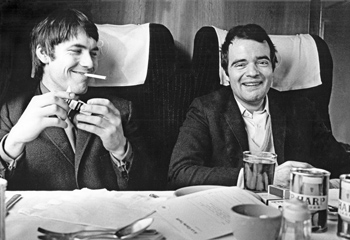 Chris Stamp, left, and Kit Lambert became accidental managers of one of the world’s greatest rock bands, as documented in “Lambert and Stamp.”

First-time documentarian James D. Cooper’s insightful film “Lambert and Stamp” made quite a splash at its world premiere at the Sundance Film Festival in 2014. Cooper’s debut documentary turns out to be an outstanding music doc boasting top-notch sight and sound. It also benefits from an abundance of historical footage and revealing interviews with key players. The true tale — stranger than fiction — explores the unlikely origins of the legendary British rock band, The Who.

The fascinating, tragic story focuses on their accidental managers, Kit Lambert and Chris Stamp, a funny odd couple with a complicated relationship who brought the band to fame. The roster of historical figures interviewed in “Lambert and Stamp” include Stamp (before he died in 1992) and famous members of The Who, Roger Daltrey and Pete Townshend. Lambert died in 1981, so he only appears on screen in archival footage.

In the 1960s, Lambert and Stamp found each other at Shepperton Studios, where they toiled on film crews. They bonded over their shared love of film, including Jean-Luc Godard and the French New Wave that was revolutionizing cinema at the time, overcoming their divergent backgrounds in class-conscious England. Openly gay Lambert led a posh life, including an Oxford education and a famous classical composer-conductor father, Constant Lambert. Roughneck Stamp grew up in the working-class East End of London, the son of a tugboat captain and brother of now celebrated actor Terence Stamp, who speaks about his brother in the movie.

As wannabe filmmakers inspired by their beloved family members, Lambert and Stamp sought an appropriate subject for their prospective cinéma vérité documentary. After deciding to look for a rock band in the swinging London scene of 1964, they found the High Numbers, a fledging foursome requiring significant development before they would become worthy of a film made about them. So Lambert and Stamp became band managers, a profession in which they were novices, but they turned out to be naturals with solid instincts.

They reapplied their cinematic inclinations to help create audience-pleasing rock stars, adorned in fashionable costumes, who gave shockingly entertaining performances. The managers rechristened the band The Who, which eventually became a smashing success and legendary super group. Lambert and Stamp’s surprising success as music entrepreneurs locked them into the business. They never got around to making their film as originally intended, but a good amount of the footage they shot illuminates the screen in “Lambert and Stamp.”