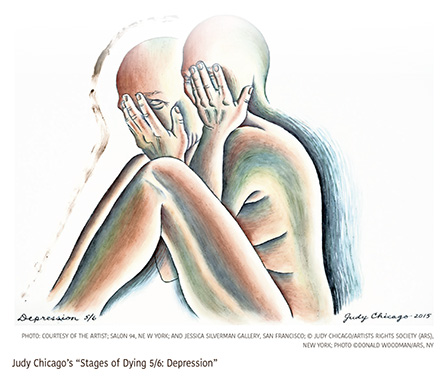 Judy Chicago has brought her latest body of work to the National Museum of Women in the Arts in an exhibition that is a brutal, unrelenting and fearless exploration of death and dying.

Chicago, best known for her monumental contributions to feminist art, tackles mortality in her show “The End—A Meditation on Death and Extinction,” which examines the uncomfortable subject matter from both a personal and universal level. The potent images may not appeal to everyone, but the choices are consistently bold and memorable.

There are nearly 40 pieces of painted porcelain and glass to view, along with two large-scale bronze sculptures. Throughout it all, Chicago weaves together a vision that focuses on human mortality — especially the female form as it ages and nears death — and species extinction tied to human action or inaction.

The boundary-pushing artist uses a variety of techniques — from needlework to welding to the type of visually striking graphic art seen here — to explore issues ranging from sex to birth to violence.

Here, Chicago reflects on her own mortality, the taboo of aging — particularly in a society that values female youth and beauty — and the suffering of endangered animals and ecosystems.

“NMWA has had a long and wonderful relationship with Chicago, who supported the museum from the very beginning. The museum has had several exhibitions devoted to different aspects of Chicago’s works over the years and we are immensely honored that she chose to exhibit her latest body of work here,” curator Virginia Treanor told The Washington Diplomat.

Chicago is most famous for her 1970s work “The Dinner Party,” a groundbreaking and ambitious installation that examines famous mythical and historical women through 39 place settings that feature vaginal iconography. The work got Congress’s attention back in 1990, when Chicago tried to give the piece to the University of the District of Columbia, but lawmakers subsequently sought to nix $1.6 million from the UDC budget in an appropriations bill in retaliation. Rep. Bob Dornan, a California Republican, memorably called the work “disgusting” and said, “This thing is a nightmare. This is not art, it’s pornography, 3-D ceramic pornography.” The work was also protested by students, and Chicago abandoned the effort.

But the backlash didn’t stop “The Dinner Party,” which toured several continents and was seen by 15 million people before it was retired in 1996 (since 2007, it has been on permanent display at the Brooklyn Museum in New York).

Nor has controversy slowed down Chicago, who recently turned 80 and opened her own museum in Belen, New Mexico, the community where she lives, despite resistance by evangelical residents.

Chicago is also debuting her latest works in D.C., where the pieces in “The End” are in conversation with a wealth of big issues — feminism, tradition, death, the destruction of the natural world. Chicago’s exploration in particular of women’s achievements and women’s bodies is, as always, notable. It’s unquestionably visceral and stark, but ultimately there’s a hopefulness, or at least a sense of eventual serenity and purpose, in the pieces that touch on these points in connection with death. Her works that hone in on animals and extinction, however, are vicious indictments of humanity’s impact on the natural world. 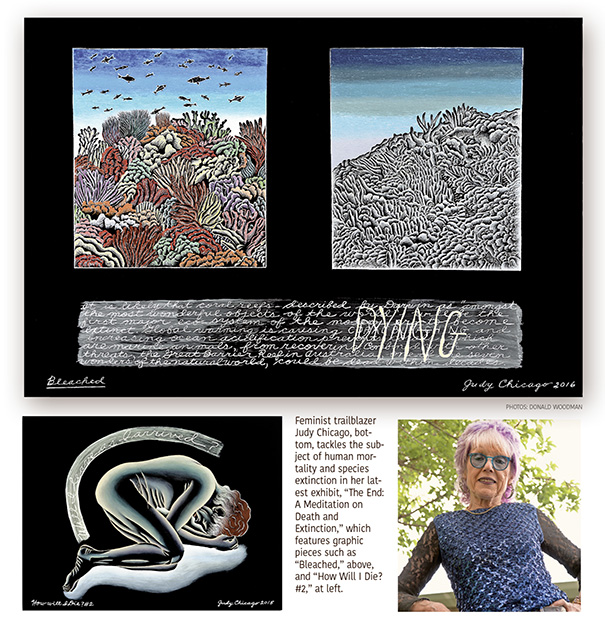 In her series “Stages of Dying,” Chicago uses pen work on porcelain to depict a nude woman in the five stages of grief. It’s a fascinating choice of medium that reflects on one of her main explorations as an artist: what defines women’s work. In “Mortality,” the next series on display, the artist employs kiln-fired glass paint on black glass that ruthlessly traverses questions about the end of life. This material suggests a permanence that plays wonderfully against the theme of the show.

“I do greatly admire the technical execution of all of the works, particularly those on black glass. There is a luminosity to them that you can only appreciate when you see them in person,” Treanor noted in an email.

In the final series, “Extinction,” Chicago depicts animals, in graphic fashion, that have been irrevocably harmed by people. There are horrific images on display here, and Chicago does not dance around her point, which is expressed largely through handwriting and childlike depictions of these animals.

“The themes in this exhibition are universal. Human mortality as well as species endangerment is something that affects us all,” Treanor said.

Chicago’s art is connected closely with the written word and her own handwriting, and she uses quotes and writing throughout her compositions. It usually helps pack a punch to the works and adds to the personal nature of the exhibition, but sometimes it feels lazy or obvious. That’s most apparent in her piece “A Separate Weariness,” which features a fascinating image of a woman seemingly transforming into a skeleton. But Chicago adds in a quote from Albert Camus —“…some of us feel such a desperate weariness, a weariness from which nothing remains to set us free except DEATH” — that ultimately lessens the impact of the piece by making things a little too on the nose.

Overall, though, Chicago’s exhibition is filled with a challenging intensity that demands the viewer’s meditation as well as her own.

“In many ways, this series is the culmination of 50 years of studio practice, a practice that has taken me on a journey of discovery through many different topics expressed through a wide range of techniques,” Chicago said in a statement. “In a world in which women’s cultural production continues to be undervalued, discounted or marginalized, I am pleased to premiere this work for the first time at the National Museum of Women in the Arts, the only museum in the world dedicated to ensuring that women’s art is preserved.”

Judy Chicago—The End: A Meditation on Death and Extinction