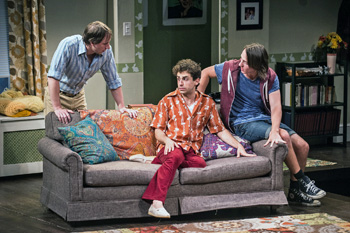 From left, Todd Lawson as Ed, Brandon Uranowitz as Arnold and Michael Lee Brown as David star in “Torch Song Trilogy,” about Arnold’s journey as a gay man looking for love and family in the 1970s.

The Studio Theatre has effectively accomplished the difficult feat of dusting off and reviving “Torch Song Trilogy,” one of the gay community’s signature artistic landmarks. Michael Kahn, the Shakespeare Theatre Company’s artistic director, makes his Studio debut as director.

Kahn is an expert at resurrecting historical classics, and Harvey Fierstein’s script — which tells the story of a gay man’s search for love, companionship and family in the 1970s — can be considered a historic recounting, after all. Before AIDS and DOMA (the Defense of Marriage Act that barred the federal government from recognizing same-sex marriages), it was a time of less enlightenment — when few people were “out,” bar “back rooms” for anonymous sex were widespread, and discrimination based on sexual orientation was commonplace.

But why this play, now? Why would Studio produce a relic that might make audiences wince at the characters’ agonizing naiveté about such issues as unsafe sex and sexual orientation freedom? Why not bring to life a script that tells a happier story — of the progressive present and hard-fought-for victories for LGBT (lesbian, gay, bisexual and transgender) people over the past three decades?

The answers are many and simple. Universal themes like wanting to belong, to find love, and to be accepted are timeless. This play is worthy of its 1983 Tony Award for Best Play and worth revisiting. The effort is also worth it to showcase its star Brandon Uranowitz, who dexterously portrays Arnold Beckoff, the lead character, married in most fans’ minds to Fierstein, who won Tony Awards for both writing the play and originating the role.

Uranowitz’s aura as Arnold — his energy, feistiness, comedic timing, pathos, even his gravelly voice — is uncannily matched to Fierstein’s. Arnold’s character, somewhat autobiographical of Fierstein (New York, Jewish, drag queen, out of the closet before most celebrities, a gay rights activist), actually wouldn’t work without this comparison and likeness.

The play — a three-and-a-half-hour saga that combines three separate one-acts — would certainly suffer without an ultra-strong lead. Despite the fact the script outstays its welcome by a good 45 minutes and its content isn’t groundbreaking anymore, Uranowitz never loses the audience’s attention. Whether Arnold is fighting with his overbearing mother or wishy-washy lover, or on stage alone, delivering a lengthy soliloquy, Uranowitz entertains with humor, anguish and constant verve.

The opening scene of a backstage dressing room, complete with red streamers, power puff and red boa, finds Arnold alone, preparing for one of his drag-show performances. As he applies makeup (“emasculating his eye,” he calls it), stockings and wig, he warms up the audience with self-deprecating one-liners. “My biggest problem is being young and beautiful…. I’m NOT young and beautiful,” he teases. As he moves on to unapologetically recount his failed love life, Uranowitz grabs the audience by the collar and secures Arnold’s foothold as the empathetic underdog for whom you’ll never stop rooting. 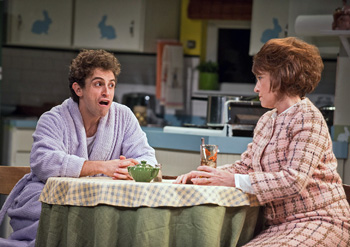 Arnold talks to his mother (played by Gordana Rashovich).

The play is made up of three acts. During “International Stud,” (the name of a gay men’s bar in Greenwich Village in the 1960s and ’70s), Arnold meets and falls in love with Ed, a closeted bisexual played by Todd Lawson. During “Fugue in a Nursery,” one year later, Arnold and his young, model boyfriend Alan (Alex Mills) visit Ed and now-wife Laurel (Sarah Grace Wilson) at their upstate farm. The third Act, “Widows and Children First!”, takes place five years later and expands the cast to include Arnold’s doting but disapproving mother and his gay, adopted teenage son.

Uranowitz, clearly the strongest actor in the production, takes more emotional risks than does, for example, Lawson, who comes across as sufficiently infuriating but one-dimensional, and Wilson, who plays a vacuous, unsuspecting idealist. The exception is Ma, Arnold’s mother, portrayed by Gordana Rashovich. She could easily fall into a caricature (think Rhoda Morgenstern’s mother), but Rashovich proves with directed intensity that stereotypes are often true.

Each act has its own set and unique feel, signifying Arnold’s transformation from needy youth to mature parent. Kahn takes every opportunity to use James Noone’s exquisite sets to his best advantage. For example, in Act II, he cleverly stages the two couples (Arnold and Alan; Ed and Laurel) in one huge bed to denote separate bedrooms, but an uncomfortably incestuous, comedic situation.

The play is painful to watch at times. (“Who hasn’t been waiting for the telephone to ring, who hasn’t had that particular moment when they realize the difference between sex and love, who hasn’t tried to be more grown up than they are?” writes Fierstein.) But through the honesty (and a lot of laughter) comes acceptance, which is a universal draw.

Gay or straight, male or female, Jewish or Gentile, drag queen or accountant, we all want what Arnold wants: acceptance. Never mind that times have changed. That only keeps us coming back to a script whose message is as relevant today as it was in the past.