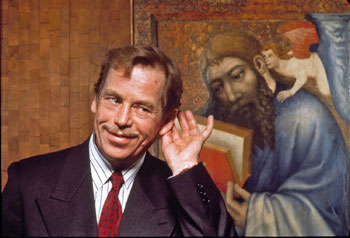 Before Václav Havel became president of the Czech Republic, more than 300 plain-clothed policemen under communist rule were assigned to regularly follow him. One strolled just a few feet behind him while he was walking his dog. Another peered over Havel’s shoulders while he read his mail outside. Even when he drove through the countryside, his handlers were not too far behind in black cars.

This blanket of oppression, however, didn’t crush Havel’s spirits. Instead, they emboldened the writer and political dissident who later became the leader of a newly democratic Czech nation.

The Embassy of the Czech Republic unearthed these details on Havel as part its annual Mutual Inspirations Festival, a two-month-long celebration that highlights a prominent Czech — living or deceased — who greatly inspired and influenced Czech and American culture. Past honorees have included political leader Tomáš Garrigue Masaryk, composer Antonín Dvořák and filmmaker Miloš Forman.

“We choose personalities who can represent the values that Americans can understand,” said Barbara Karpetova, head of the embassy’s cultural section. “They’re the perfect example of the American dream … and the festival allows people to see the picture of the personality and get a deeper connection.”

As the beloved Czech leader who endured public harassment and imprisonment for his democratic ideals, Havel was a clear choice for the embassy. After all, he did shepherd a peaceful transition from communism to democracy in the 1989 Velvet Revolution. He then served as the former Czechoslovakia’s last president and the newly created Czech Republic’s first president from 1993 to 2003 (Havel died in 2011 at the age of 75).

The embassy, however, was particular in reserving 2013 to commemorate Havel. This year, the late president would have turned 77. That number was also the title of an important democratic manifesto he co-authored — Charter 77 — that criticized the communist government’s human rights abuses. Vilified by the regime in the late 1970s, the document and the spreading of its message were considered a political crime.

But Havel was more than just a political icon. He was a man of many talents. In addition to being a president and prisoner, he was a poet, playwright and revered writer.

So it’s only fitting that the Mutual Inspirations celebrations span the cultural spectrum. Partnering with venues throughout Washington such as the National Gallery of Art, Georgetown University, Library of Congress, Atlas Performing Arts Center and Avalon Theater, the embassy has planned more than 30 events from September through October, reflecting on and paying tribute to Havel’s multifaceted life. The events range from theater performances, lectures and film screenings to concerts and exhibitions (culminating in a ’70s-themed wrap party at the Czech Embassy on Oct. 31). Several of the events will also introduce ongoing or permanent projects to raise awareness of Havel’s connections to the United States and the rest of the world.

For years, Georgetown University played a major role in highlighting Havel, welcoming him to speak twice — in 1990 and 2005 — with Czech-born friend and former Secretary of State Madeleine Albright, who teaches at the university.

With Havel’s affinity for the university and the embassy’s support, officials decided to turn a public space near 37th and O Streets into a memorial called Václav Havel Place just in time for the festival. The outdoor site features a linden tree (the national emblem of the Czech Republic) and two wooden teak chairs on each side.

“Václav Havel was devoted to the idea of the university as a place to foster discourse and the free exchange of ideas,” said John J. DeGioia, president of Georgetown University, in an issued statement. “He also believed deeply in the power of our young people to make positive contributions to our society. We were privileged to have welcomed him to our campus through the years, and we are proud to help sustain his legacy with Václav Havel Place.” 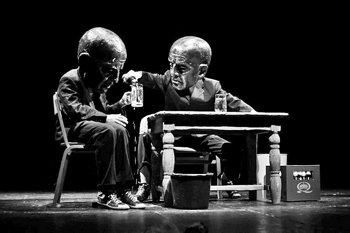 “Antiwords” by the Ambassador Theater and Spitfire Company draws on Havel’s own play “Audience” and its legendary film adaptation.

The custom-made design was inspired by the description of an epiphany Havel wrote in one of his letters to his first wife Olga Havlová, while he was incarcerated: “I sat on a pile of rusty iron and gazed into the crown of an enormous tree that stretched, with dignified repose…. I felt a sense of reconciliation indeed of an almost gentle consent to the inevitable course of things as revealed to me now.”

In addition to being a political leader, Havel was a playwright who also expressed his resistance to totalitarianism through artistic works. To that end, the embassy, in collaboration with Alliance for New Music-Theatre, Ambassador Theater and Fort Fringe-The Shop, will feature “Havel’s Trilogy,” a series of performances and discussions that delves into Havel’s one-act plays, which have a common character named Ferdinand Vanek who represents the dramatic alter ego of the playwright himself.

Meanwhile, at the National Gallery of Art, a special film program in October called “The Play’s the Thing: Václav Havel, Art and Politics” features archival footage and documentaries obtained from the National Film Archive in Prague as well as Havel’s directorial debut film.

In choosing the films, Peggy Parsons, film curator at the gallery, saw that there was a camaraderie among the political dissidents, artists and intellectuals in opposing the communist government at the time.

“The network of people supporting one another was quite broad,” she said of Havel’s circle.

Individuals who personally knew Havel, as well as those who admired him from afar, knew of his humility. He had no aspirations to run for office. Even when it was rumored that he would receive the Nobel Peace Prize in 1991, he successfully steered the fanfare toward Aung San Suu Kyi, the Burmese activist who was still fighting for democracy in her own country.

Parsons admitted that she knew only the basics of Havel as a political figure. After viewing the films for two weeks in Prague, she, too, saw an “unpretentious” side of him that she never knew.

Thomas Dine, president and director of American Friends of the Czech Republic, said Havel’s legacy needs to continually be examined, especially in light of ongoing struggles for freedom in the Arab world and elsewhere.

“The man is of such global significance,” he said. “The power and powerless. It’s so relevant.”

It’s especially relevant to American audiences, says Czech Ambassador Petr Gandalovič: “Václav Havel’s unyielding commitment to democracy is reminiscent of America’s founding fathers. His life story, which some might compare to his absurd plays, culminated in what one can only view as a truly American happy ending — a former prisoner of consciousness elected to the highest office of his nation. It is this remarkable blend that makes Václav Havel a genuine Czech-American inspiration, an example worth emulating.”

from Sept. 5 to Oct. 31
venues throughout Washington, D.C.
For a complete schedule of events, please visit www.mutualinspirations.org.