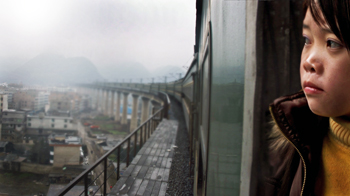 On May 12, “Film Forward: Advancing Cultural Dialogue” presents an ambitious showcase of 10 award-winning, independent international films playing simultaneously at 10 different venues all on the National Mall, with a kickoff reception at the Smithsonian Castle. In addition to each film’s director, special guests who are scheduled to be on hand include Robert Redford, Kerry Washington, Ed Norton, Benjamin Bratt, Forrest Whittaker, Alfre Woodard and others.

Zhang Qin, resenting her migrant parents’ constant absence, quits school to work in a factory herself, devastating her family, in Lixin Fan’s “The Last Train Home.”

The D.C. event — which takes place at venues such as the National Archives, National Museum of American History, and U.S. Department of Agriculture — is an extension of a project that sends both U.S. and international films, along with their directors, all over the world over the course of a year. The screenings, often hosted by U.S. embassies, are a kind of public diplomacy tool to connect with local and youth populations — including factory workers in China, university students in Tunisia, villages in Turkey, and even underserved American audiences in New York, Michigan and Tennessee.

For one night, 10 of these films will be screened in D.C., where the 10 filmmakers will also meet with the U.S. State Department to review their roles as cultural ambassadors and learn about other U.S. arts programs abroad.

Rachel Goslins, executive director of the President’s Committee on the Arts and the Humanities, said her group is “excited to bring the filmmakers to D.C. to share their experiences screening these films through U.S. embassies and local partnerships over the last six months. Here in the U.S. and abroad, this program is creating powerful dialogue and engagement that helps people from other places better understand America, and helps us better understand the world in which we live.”

Sundance Institute Executive Director Keri Putnam said her organization has “long believed that stories told on film have a unique ability to inspire discussions, to reflect the diversity of our world, and often to show common themes that unite us all. We are truly honored to collaborate with our partners to reach new audiences and generate cross-cultural dialogue around the work of some of today’s top independent filmmakers.”

The range of stories depicted in each film is as diverse as the directors behind those stories. For example, Cherien Dabis’s auspicious debut “Amreeka” follows a Palestinian mother who struggles with the daily grind of intimidating West Bank checkpoints and later with adjusting to her new life in rural Illinois. Lixin Fan, meanwhile, documents the mass exodus undertaken by more than 130 million migrant workers in China as they travel home for the New Year — the one time they’ll reunite with family all year — in “The Last Train Home.”

Though varied, the featured films share universal themes. “Amreeka” and “The Last Train Home” examine the difficulties faced by migrants seeking better economic prospects at the expense of their quality of life. “Boy,” “La Mission,” “Udaan,” “Winter’s Bone” and “Afghan Star” are all coming-of-age stories, often set in nontraditional family environments. “Son of Babylon” looks at how family love endures despite the horrors of war, while “A Small Act” and “Freedom Riders” reveal how individual actions can have lasting global impact.