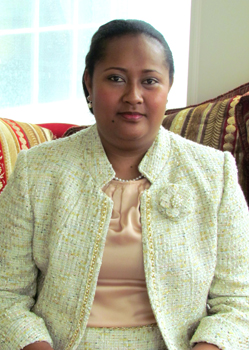 When Numa Mulina stepped off the plane and arrived in D.C. earlier this year, it was a big departure from the life she had known. She was not only leaving behind her Pacific home of Papua New Guinea for the first time, she was also entering a completely new world.

It was a cold awakening, literally. “We came here in January and it was snowing,” said Mulina, wife of Rupa Abraham Mulina, the ambassador of Papua New Guinea. “We saw it as we landed. We had never seen snow before. We took off our shoes and jackets and walked through it; we wanted to completely experience it. The whole staff from the embassy was there to greet us with warm clothes. Now, I can hardly wait for fall and all the colored leaves.”

It’s a new experience for her husband as well. A first-time ambassador, Rupa Mulina is a Hubert Humphrey Fellowship scholar who holds a master’s degree in economics from Macquarie University in Sydney. He has served as the defense and treasury chief of his country, later becoming the managing director of a commercial bank and then a private consultant. He’d been asked before to serve as his country’s ambassador to the United States, but he turned down the prestigious position. This time, though, he said yes.

While Numa said she misses Papua New Guinea’s laidback lifestyle and the fact that she had her extended family close by, she appreciates the grandeur and sophistication of Washington. “This very powerful country is so organized in health care, education and infrastructure. Here, I get to meet different kinds of people from all over the world and all walks of life.”

But the climate is different, in more ways than one. In Papua New Guinea, she said people tend to spend more time outdoors — not surprising given that temperatures average in the 70s and 80s — and socialize with neighbors. “At home, we often take a walk after dinner and chat with people, sit on the porch and discuss the day with our neighbors. We are much more casual, relaxed and very social.”

Here, Numa doesn’t know her neighbors well and the move took her away from her family. “We came to this very big house — there were only three of us. It was lonely and very sad. At home, the house would be full; I’d be helping to take care of my brother’s children,” Numa told us. 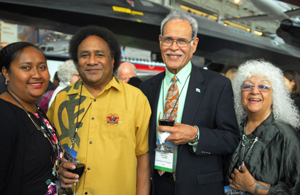 The house became less empty, however, after the arrival of their teenage boys. The oldest, 20-year-old Reuben, came in July and is interested in studying business and music. “He’d love to make records or have his own record company,” Numa said. Pala, 15, who came in April, is a ninth-grade student at Woodrow Wilson High School and wants to be a lawyer some day. Meanwhile, 14-year-old Joshua, who landed in the snowstorm with them, is in the eighth grade and dreams of becoming a pilot.

“The other two boys follow Reuben and try to do whatever he does,” Numa said. “These days with social media, you can’t control them. Apart from Facebooking, there’re good boys.”

Despite the allure of social media, the teens do their fair share around the house. “I don’t cook. The boys do. My husband cooks, grills too,” Numa told us. “They say that since they outnumber me, they will cook and clean. They each clean their rooms before they leave in the morning.”

The family also enjoys playing ping-pong together. “My husband is the best. He and I always beat the kids,” she said.

Now that the boys are teenagers, though, Numa tries to keep herself busy when the boys are at school or away. “I read novels but never finish them,” she said. “I also love to read magazines and newspapers. I love to watch movies. I take a walk every morning and afternoon and enjoy window-shopping.”

Back in Papua New Guinea, Numa held two jobs: managing a restaurant in a five-star, family-run hotel and serving as an administrator in the International Training Institute, a leading private training and education provider. 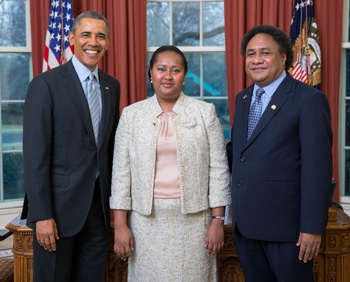 From right, Rupa Abraham Mulina, the ambassador of Papua New Guinea, and his wife Numa Mulina present his credentials to President Obama earlier this year.

Now her job is supporting her ambassador husband and helping him get to know the local diplomatic community. “Through my connections to other wives, my husband meets other high-ranking men and women. I guess that makes me the kitchen cabinet of my husband,” she joked.

Another important responsibility is simply educating Americans on her Pacific island nation of 6.5 million people.

“I am proud of my country. When I tell people where I am from, obviously they don’t know where Papua New Guinea is. They guess that we are in Africa and that we are cannibals,” Numa quipped. “I tell them no and that we are a Pacific country between Indonesia and Australia.”

Situated about 100 miles north of Australia, Papua New Guinea shares the main island of New Guinea with Indonesia but also includes many smaller surrounding islands. Altogether, the country is about the size of California and features mountainous terrain along with coastal lowlands and rolling foothills. More than 800 hundred different languages are spoken in Papua New Guinea, although English is the main language of business and education; Numa speaks six languages.

“Asians know who we are but even Europeans don’t. We are just developing with a recent pipeline of $20 billion in an ExxonMobil project,” Numa said of the resource-rich economy, whose per-capita GDP is nearly $3,000 while growth topped 5 percent last year.

In addition to natural resources and agricultural products like cocoa, tourism is an important economic driver, although the most obvious source for tourists — Australia — is also a source of frustration for some Papua New Guineans. “We have to have a visa to go to Australia but they don’t need one to come to us. We need more understanding between the two countries,” Numa said.

Numa is equally frank about relations with the United States: “I wish the U.S. would play a bigger role in the development of our country. We are dealing with gender violence and we would open our doors to the help. In comparison, the Chinese ask us what we want.”

Her candor is a rarity in the more formal circles of diplomacy, and while she says protocol is important, so is honesty. “For me, there is too much protocol.”