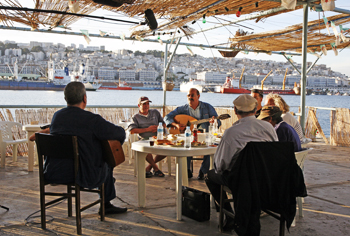 For “El Gusto,” director Safinez Bousbia tracked down Muslim and Jewish classmates at the Conservatory of Algiers who in the 1940s studied a musical genre that translates to “the music of the people,” defying class, religion, and ethnicity.

“This year Arabian Sights is presenting some of the newest and liveliest films from the Arab world, including two American premieres from Lebanon,” said Shirin Ghareeb, festival director and founder. “Some of the films feature first-time directors as well as Arabian Sights favorites. The themes reflect timely experiences such as the ongoing revolutions, social issues, as well as humorous stories.”

Arabian Sights features contemporary cinema, but the 2012 edition explicitly honors the past. This year’s film festival is presented in conjunction with the National Geographic Museum’s current exhibit, “1001 Inventions: Discover the Golden Age of Muslim Civilization,” which surveys Muslim cultural and scientific accomplishments since the seventh century. After opening night at the Embassy of France (La Maison Française), all screenings unspool at the National Geographic Society’s Grosvenor Auditorium.

The following highlights include special events accompanied by the filmmaker in person and/or an embassy-sponsored reception:

In a co-presentation with the Embassy of Algeria, director Safinez Bousbia discusses her documentary “El Gusto” (Fri., Nov. 2, 6:30 p.m., followed by reception; Sat., Nov. 3, 6:30 p.m.), which captures a reunion between Muslim and Jewish alumni of a 1940s music class. Bousbia won Best Director from the Arab World at the Abu Dhabi Film Festival for “El Gusto,” also an official selection at the 2012 Tribeca and Seattle International Film Festivals.

On the closing night of Arabian Sights 2012, the Egyptian Cultural and Educational Bureau at the Embassy of Egypt sponsors a reception following the Nov. 4 screening of director Amr Salama’s “Asma’a” (also showing Fri., Nov. 2, 9 p.m.), in which a 45-year-old woman (prize-winning actress Hend Sabri) hides her HIV-positive status in Cairo. At the Abu Dhabi Film Festival, the film won prizes for Best Director from the Arab World as well as Best Actor (Maged El Kedwany).

Arabian Sights is produced by Filmfest DC with support from cultural sponsors including the Embassy of France; the Embassy of Algeria; the Egyptian Cultural and Educational Bureau; the Center for Contemporary Arab Studies at Georgetown University; the American-Arab Anti-Discrimination Committee; and the Jerusalem Fund.