Home The Washington Diplomat May 2015 Freewheeling Statecraft: Diplomats and Their Cars 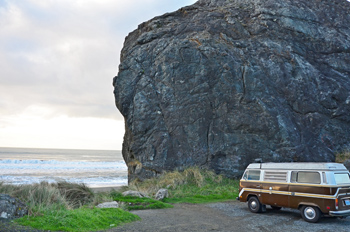 Volkswagen Westfalia camper vans are back in style on the West Coast. But I’d never seen one with diplomatic plates until I spotted a mid-1970s vintage beauty — brown, with gold-and-white trim — parked at Jessie M. Honeyman Memorial State Park along the Oregon coast in December. The beach was empty and the owner was nowhere in sight. Peeking into a camper van is a bit like barging into someone’s home, but the curtains weren’t drawn and I couldn’t resist.

A slip on the dashboard revealed that the driver had paid $24 to park overnight — with a view of the Pacific Ocean — and there was enough gear in the van to prove they were sleeping in it. A copy of Peter Stark’s new book, “Astoria,” which details the story of the first American settlement in the Pacific Northwest, was sitting on the passenger seat. I was impressed. Here was a diplomat who wasn’t holed up in an office, firing off cables based on things he or she read about in the papers. They were out in the trenches, experiencing my country Jack Kerouac-style.

I’ve always loved vintage cars but I’ve never been one to invest much in my rides. When I was an American diplomat posted overseas, I always felt a little self-conscious about the clunkers I drove. In Macedonia, my first post, diplomats didn’t have to pay tolls and could cut to the front of the line at border crossings. But even with diplomatic plates, my hubcap-less, 10-year-old Nissan Altima commanded little respect. Working on the assumption that the owner of the VW camper must have been a kindred spirit, I left my business card, along with a note asking them to get in touch with me so I could include them in this story.

More than 200 years after Benjamin Franklin, America’s first diplomat, arrived in France with what one observer called a “wreck of a carriage and three decrepit horses,” diplomats still worry about their wheels and the impression they create. What do their cars say about them and the country they represent?

Lawrence Butler is a semi-retired diplomat who served as U.S. ambassador to Macedonia and completed tours in Iraq, Bosnia, Brazil, Ireland, Serbia, Bulgaria, Denmark, Belgium, Germany and Washington, D.C. As a senior-level diplomat, he spent much of his career being driven around in large, bulletproof vehicles, but now he has a 2008 MINI Cooper that drives like a go-cart — “fast, tight and fun.” He knows as well as anyone that what you drive, both on and off the job, can make a lasting impression.

“I took a 1974 Datsun 260Z to Finland on my first tour,” he said in an e-mail. “I stopped traffic in Leningrad in October 1977. Literally, male pedestrians crossing the street crowded around the car. I had to pop the hood to display the straight-six engine. Score one for Japanese-American public diplomacy.”

Americans are known for driving gas-guzzlers, but Foreign Service Officers tend to be pragmatic in their choice of vehicle. They buy cars suitable for their posts — cars that can be serviced locally and will be easy to resell. Ambassador Butler said that the only big car he used as a personal vehicle abroad was a Ford Explorer that he drove in Belgrade in the mid-1990s while the war in the Balkans was still raging.

“I bought it as a life insurance policy for my family. It was bigger than the Yugos on the road,” said Butler, who also served as the State Department’s deputy assistant secretary of state for Iraq. “Health care was nonexistent. Plus, four-wheel drive made really good sense.”

A good car can be like a member of the family. Butler remembers them all: the locally made, three-door VW Passat in Brazil, the “horrible, underpowered” Peugeot 505 he sold in Bulgaria to a fellow diplomat for $3,000 more than he paid for it, the Volvo XC70 in Bosnia and others. And so does Dennis Jett, a retired American diplomat who served in Argentina, Israel, Malawi and Liberia and was the U.S. ambassador to Peru and Mozambique. Jett recalls being the only person in Israel with a yellow Pontiac Firebird. He also remembers the Peugeot wagon he cruised the streets of Lilongwe with in Malawi, and the stylish BMW 318 he sold to a Liberian who got it out of Monrovia on one of the last charter flights out of the country during its civil war. 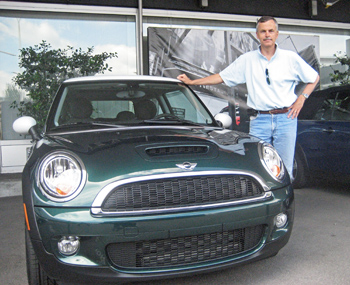 The cars that American diplomats drive for their personal use are often very different from the official vehicles they are ferried around in at work. The U.S. government, along with other countries like France and Germany, purchase domestic-made vehicles that tend to be large (think Chevy Suburban), if not bulletproof.

A State Department spokesperson said that the General Services Administration (GSA) is the mandatory supply source for the vehicle purchases of all federal agencies. Model selections and manufacturers vary depending on what the GSA offers each year on contract. The State Department refused to detail any of the vehicle security features mandated at high-threat posts, but a spokesperson said, “Some vehicles are modified and armored in response to the local threat environment.”

What we drive impacts how we’re perceived and some think that when American diplomats arrive at meetings in enormous, bulletproof, gas-guzzling SUVs, it reinforces negative stereotypes about American arrogance and lack of concern for the environment.

“The first problem is [the] ‘buy American’ [policy], which means bigger cars and supply-chain problems if you have more than one or two basic models,” said an American diplomat who spoke to The Diplomat on background. “I would prefer the flexibility to purchase vehicles where we serve that are appropriate for local conditions and can be serviced. We’d blend in better and [there would be] less down time waiting for American spare parts.”

“We would take the path of greatest expense and that made the least sense just to sell another American-made car that was ill-suited for the local conditions,” said Jett, author of a new book, “American Ambassadors: The Past, Present, and Future of America’s Diplomats.”

Dodge had its hideous, boxy Diplomat model in the 1970s and ’80s and India’s Hindustan Motors made a beloved little jalopy called the Hindustan Ambassador from 1958 until last year, but most legit diplomats drive much swankier cars. Many luxury brands offer diplomatic discounts and accredited diplomats can often acquire and sell cars duty-free, so it’s not uncommon for them to use a car for their tour and then turn a profit when it’s time to sell.

Limos, BMWs, Lincoln Town Cars and Benzes that wouldn’t look out of a place in a hip-hop video are not uncommon. And sweet rides aren’t just for those from wealthy nations. In fact, one diplomat who spoke to The Diplomat on background said the rule of thumb with cars is, “The poorer the country, the nicer the cars their diplomats drive.”

Oil-rich Equatorial Guinea may be one of the world’s most corrupt kleptocracies. The fleet of luxury vehicles — Bugatti, Bentley, Lamborghini, Ferrari, Porsche and Maserati — owned and later seized from Teodoro Nguema Obiang Mangue, the son of Equatorial Guinea’s dictator, has been held up as a prime example of that country’s endemic corruption.

Pamela Eyring, president of the Protocol School of Washington, said that diplomats from developing countries tend to be drawn from the elite of their society.

“For them, an imported car could be seen as a reflection of their personal status, and a statement to others their country is deserving of respect,” she said. “They tend to be more status-oriented than egalitarian.” 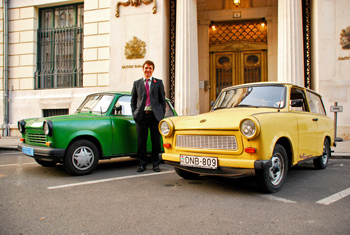 British Ambassador Steven Fisher poses by his green East German-made Trabant for Total Car Magazine during his posting in Budapest.

It would be overtly colonial and downright disrespectful to suggest that developing world diplomats should putter around in beat-up cars, but it’s a reality that their choice of vehicles will be scrutinized more closely than that of colleagues from, say, Luxembourg or Qatar. In other words, turn up for a meeting in which your country is requesting debt relief in an Aston Martin worthy of James Bond and brace yourself for a few raised eyebrows.

Of course, what diplomats and world leaders drive or don’t drive can also reinforce positive impressions as well. Colum Lynch, a veteran foreign affairs and U.N. reporter for Foreign Policy, said that he’s noticed high-ranking Dutch diplomats riding their bikes around midtown Manhattan in business attire. José Mujica, Uruguay’s famously modest president, who left office after just one term, as promised, at the end of February, drives a humble 1987 VW Beetle that the Obiangs probably wouldn’t let their pool boy drive. Mujica’s $1,800 ride comprised 100 percent of his net worth, according to his 2010 personal wealth declaration, but last year an Arab sheikh offered him $1 million for the car. (He said that if he decided to accept it, he would spend the money on the poor.)

And the Finns, who have the greenest embassy in Washington, also bring an environmentally conscious approach to transportation. Their U.S. ambassador’s official vehicle is a Mercedes-Benz E-Class hybrid, while the mission in D.C. has three chopper-style bikes made by Jopo, a Finnish company, that staff use to get to and from official functions. Their press counselor, Sanna Kangasharju, has no vehicle and says she doesn’t need one. “The money we save in not owning a car — parking, gas, insurance, maintenance — we can happily use for Uber and taxis, and there’s still plenty left over,” she said.

It’s hard not to admire missions who go green but it’s also worth noting that diplomats from countries like Finland don’t have the same security issues Americans have to worry about. Security fears aside, though, the reality is that everyone has to get around one way or another. Do diplomats feel peer pressure to arrive in style? It depends on how you define the term. Steven Fisher, now Britain’s ambassador to the Dominican Republic, found out during a recent tour in Budapest that you don’t have to spend a bundle on your car to get rock-star treatment.

According to Total Car Magazine, Fisher bought a gimpy old East German-made Trabant for $400, painted it “British racing green” and started to drive it to meetings and official functions — not to make a particular statement but purely because it was an interesting, fun car. Pretty soon, all of his colleagues wanted a ride in it.

“It might sound strange from the deputy head of Her Majesty’s mission, but I always try to steer clear of status symbols,” he told Total Car’s Zsolt Csikos. “I have never longed for a luxury car. I don’t like them because of their flashiness, but I feel unmoved by their shape also. The Trabant is simple, it brings a smile to people’s faces, everybody feels a certain sympathy towards it.”

But cars can still be a touchy subject, apparently. Several embassies and consulates approached for this story declined to participate. A Tweet sent to the U.K. Embassy in the Dominican Republic, asking what Fisher drives now that he’s an ambassador, went unreturned. And the owner of the VW Westfalia I saw in Oregon never responded to my note, and no mission on the West Coast would claim it.

The writer Jim Atkinson once said, “Cars are like rolling diaries, metal and plastic and paint tableaux of the last 10 years of their drivers’ lives … every dent, every drooping slice of chrome, has a story behind it.” Perhaps when it comes to diplomats, some of those stories are best kept secret.