Photos: Cheick Saidou from the Ministry of Agriculture (MinAgri.fr)

An American delegation of officials from the Urban School Food Alliance recently visited Paris as part of a partnership between the New York City Department of Education’s SchoolFood initiative and the French Ministry of Agriculture, Food and Forestry to exchange ideas on everything from promoting healthy eating to teaching children about the flavors and origin of their food.

When UNESCO singles out your country’s gastronomy as a “world intangible heritage,” then food is no laughing matter. The French take eating seriously and consider it to be a sacred piece of their national identity that should be preserved and passed on to future generations — both at home and in school.

For Americans, food is also a cherished tradition, although it has a more conflicted identity in a nation struggling with rising rates of obesity. Perhaps nowhere is the fight against obesity playing out more prominently than in school cafeterias, where politicians, parents and administrators have been engaged in a fierce debate over how to offer healthy meals for students. And while the debate is largely local, it has taken on international relevance.

From Oct. 13 to 15, a delegation of school officials from New York, Dallas, Miami and Chicago — members of the Urban School Food Alliance — traveled to Paris to see how cafeteria food is dished out on the other side of the Atlantic.

“In France, our culinary culture is very important to us. We focus on transmitting this model to future generations,” said Catherine Rogy, deputy counselor for agriculture at the Embassy of France in D.C.

The visit was the first major exchange in a new partnership signed in September 2013 between the New York City Department of Education’s SchoolFood initiative and the French Ministry of Agriculture, Food and Forestry to encourage officials from both countries to exchange ideas and experiences on everything from promoting healthy eating to teaching children about the flavors and origin of their food.

“France is viewed as one of the premier food cultures of the world,” said USFA Chief Executive Officer Eric Goldstein. “This is systematically achieved through the education of their youth as well as the norms set by the society as a whole.”

USFA administrators dived headfirst into the French approach to food with a visit to the French Ministry of Agriculture, where they received a briefing on the country’s National Program for Food. Again, with France’s culinary heritage central to the thinking process, the program’s goal is to connect the food chain by rebuilding links between food producers, products and consumers. The program encompasses all spaces — from school cafeterias to hospitals to prisons — and stays true to the motto of “eating well is everyone’s business.”

Urban School Food Alliance representatives were then taken to see the program in action. At the Inter-Branch Association of the Fresh Fruit and Vegetable Industry, the Americans were introduced to “Fruit at Recess,” a voluntary initiative launched in 2008.

“This program has had an impact on entire families. Bit by bit, we introduced new fruits and vegetables to students at recess time in areas where parents don’t have many resources or don’t buy much produce,” said Rogy. “The kids went home and were excited to tell their parents about the apricot or pear they had at recess, and this encouraged parents to start buying them at home.”

The delegation also learned about how France’s National Program for Food promotes pleasure and wellness in school cafeterias. The Americans traveled to an elementary school in the town of Roissy-en-Brie to participate in “Taste Education” classes, which encourage kids to try new kinds of food and better articulate different feelings and impressions with each new taste. This early enculturation is designed to help them develop healthy eating habits later on as adults.

An American delegation of school officials engages in a roundtable discussion at France’s General Directorate for Food to learn more about the French approach to cafeteria food.

The final day of the visit was spent learning about the “Have Fun at the Cafeteria” middle school program in the Picardy region where it was piloted before being adopted at the national level. The initiative is almost a microcosm of France’s broader Food Program and aims to connect the chain of food, producers, cooks and consumers at the cafeteria level. The USFA delegation sat down with around 100 stakeholders, including local council members and graduates of the food program, to share experiences and address successes and challenges.

“We have really enjoyed learning [about] the French way of [emphasizing] taste and taking pleasure in food and we want to bring our expertise in managing very large nutrition programs in urban schools [to this partnership],” said Penny Parham, director of nutrition for Miami-Dade County Public Schools.

While the idea of eating balanced, wholesome meals certainly matters to the French, how they eat and how they feel about what they eat seem to be just as important to the overall experience. Eating is a daily ritual, not a chore.

“The French educate children to have fun when they eat, to take pleasure when they eat. They sit down, take their time and when they have a meal, they eat with their friends,” said Rogy. “It’s not about counting calories.”

The French focus on the pleasure of eating well was emphasized during the U.S. visit. For example, the food curriculum is presented through positive language — instead of “don’t eat too much fast food,” children will instead be introduced to what they in fact should be eating.

“We try to avoid words that forbid,” said Rogy. “We use positive words and this helps with positive food habits.”

But with modern-day obstacles to healthy eating such as processed foods, busy days at work and distracting technology, how does one stay focused on taking pleasure in eating?

Rogy insists it’s about respecting time, about conviviality and changing up the mix of foods you put on your plate.

“With the Food Program in France, we try to hold on to our old eating habits so that families can eat together — for example, at least enjoy breakfast without looking at the TV,” she said. “As families work more and become more busy, they tend to eat in front of the TV and other habits like that. This is about changing family trends.”

The school nutrition partnership between France and New York City partly stemmed from a discussion about the Obama administration’s Healthy, Hunger-Free Kids Act. When French Minister for Agrifood Industries Guillaume Garot met with Dennis Walcott, head of the New York City Department of Education, last summer, he learned more about the White House’s efforts to push tougher dietary standards for school lunches and curb childhood obesity, which has more than doubled among American children and quadrupled in adolescents. 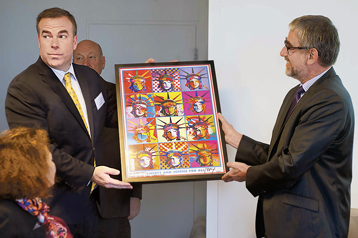 Stephen O’Brien, director of food and menu management with the New York City Department of Education, left, presents a painting to Patrick Dehaumont, chief director of the French General Directorate for Food.

Through the Healthy, Hungry-free Kids Act of 2010, heavily advocated by first lady Michelle Obama, the U.S. Department of Agriculture developed new standards for school meals — the first major changes of their kind in 15 years. The idea was for children to find the same healthy variety of foods in their school cafeteria that they may already have at home: less fat, salt and sugar and more fruits and vegetables. Through the measure, depending on their eligibility, students in low-income can receive free breakfast and lunch.

Michelle Obama’s campaign has sparked a political backlash among schools resistant to change and mandates from the federal government; food companies who profit off the current cafeteria system; and even kids, who aren’t exactly keen to switch out potato chips for cauliflower.

Before last year’s Thanksgiving holiday, disgruntled students in the U.S. took to Twitter to share sarcastic photos of unappealing-looking school lunches with the trending hashtag #thanksMichelleObama. While the USDA maintains that most cafeteria options are not as bad as the photos of mysterious mushy substances seem to suggest, there is clearly room for improvement.

And as much as local school districts despise ceding ground to the federal government — let alone taking advice from a foreign power — perhaps they could learn a lesson from the French, whose child obesity rates will likely remain below 10 percent over the next decade.

Following the successful first visit of the partnership between the Urban School Food Alliance and France, there will be further follow-up to explore how these exchanges could be implemented into concrete programs. For their part, the French are particularly interested in the U.S. School Breakfast Program, which was first launched in the 1960s and provided categorical grants to serve breakfast in schools where students were in “severe need” or had to travel long distances to get to the classroom. Now, French school administrators are realizing that more and more children are arriving to school without having eaten a proper breakfast and are exploring ways to tackle this in their own cafeterias.

The Urban School Food Alliance’s Goldstein said that both sides can learn from each other.

“Working together will allow us to be a part of the global conversation around meals offered to our students,” he said. “These conversations and sharing opportunities will allow us to counterbalance some of the negative food behaviors that an ‘American diet’ is promoting.”