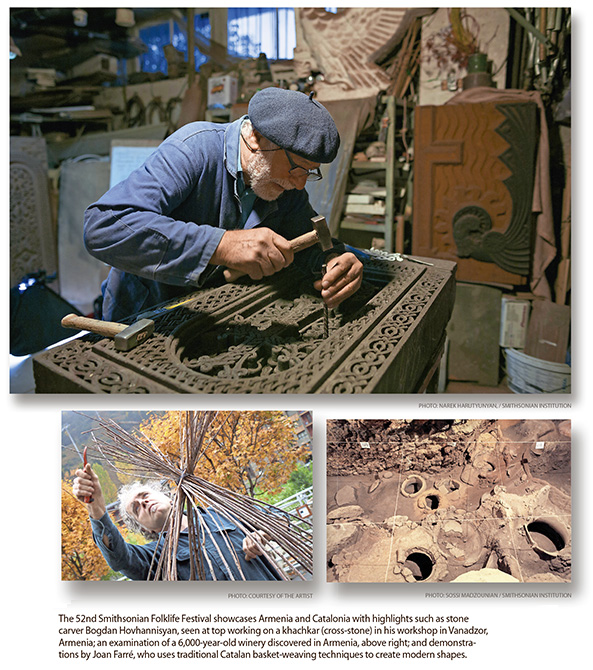 With stone carvers, winemakers, puppeteers, bakers and even towers of human people dotting the National Mall, visitors to this year’s Smithsonian Folklife Festival have the unique chance to revel in the cultural offerings of both Armenia and Catalonia without leaving Washington this summer.

Hundreds of artisans, musicians and cooks are bringing their talents to the 2018 Smithsonian Folklife Festival to celebrate and explore Armenia, a country at the crossroads of Asia and Europe, and Catalonia, in Spain’s far northeastern corner. The event — on the Mall from June 27 to July 1, and again from July 4 to July 8 — offers Washingtonians the opportunity to sample the gastronomy, crafts and songs of these two locales.

The festival has exhibited living cultural heritage every summer in D.C. for decades, with organizers long working with the diplomatic community to curate the event, festival director Sabrina Lynn Motley told The Washington Diplomat.

“This is the thing I think is so wonderful — we work with embassies quite closely,” she said. “The festival since its inception in 1967 has worked with over 100 countries and in every instance we’ve had some engagement with embassies both here and abroad.”

This year, she noted, “has been exceptional” in terms of strong partnerships with the ambassadors. With the “Armenia: Creating Home” program, the diplomatic community served a critical role. Motley said U.S. Ambassador to Armenia Richard M. Mills Jr. and Armenia’s ambassador to the U.S., Grigor Hovhannissian, “are committed to cultural diplomacy in a way that is inspiring.”

“It’s also practical,” she said. “They understand how it can really serve to strengthen ties between the two countries, and how it can improve and really lift up the profile of the artisans and artists that we work with.

“When we talk about cultural heritage and cultural sustainability and the role of both of those in the lives of people and communities, they get it,” Motley added.

Given the events in Spain and Catalonia’s situation in particular — the separatist led-regional government in Catalonia made a failed bid to declare independence last year and tensions remain high — Motley acknowledged that the festival had to be “more nimble and flexible in how these relationships worked.”

“We have good, strong partners with the cultural ministry there,” she said. “The diplomatic relationships are a bit more complicated, but we’ve worked with all to figure out how best to work with partners in Catalonia.”

With “Catalonia: Tradition and Creativity from the Mediterranean,” the festival organizers honed in on the creativity that has kept the distinctive culture of the region vibrant in the face of a history of suppression.

The festival, which highlights everything from Armenia’s winemaking to the popularity of fire in Catalan culture, celebrates both traditional and contemporary life.

“We’re not a political festival … but we’re not naïve; we know politics are a part of cultural life,” Motley said. “But our goal is to showcase the cultural life of communities.”

The festival is not only a showcase, but also an immersive experience. For example, visitors can learn to make Armenian staples such as breads, cheeses and barbecued meats (khorovats). They can toast Armenian wines and learn about the recent discovery of a 6,100-year-old winery in an Armenian cave and how winemakers in that region are reinvigorating the industry.

Likewise, admirers of Catalan culture can not only sample traditional donuts, for example, but also explore how local cooperatives have built thriving businesses and how the local Mediterranean diet has fed innovative gastronomy. The can also directly engage Catalan builders and craftspeople who will demonstrate techniques such as arranging mosaics (trencadís) and stacking stone without mortar to construct walls.

With a marketplace showcasing artisans’ crafts — where visitors can purchase everything from breads to embroidery made before their very eyes — the festival allows practitioners to display and discuss how they sustain their cultural output.

“This year’s festival is looking at cultural heritage enterprise, which is the way local food production, music, crafts and heritage tourism really do strengthen communities,” she said. “And not only by securing livelihoods, but also promoting intergenerational communication and transference of knowledge and all the sorts of ways that cultural heritage industry can strengthen communities.”

The Folklife Festival often pairs together nations, regions, states or themes that don’t seem to relate on the surface, something that visitors may think when they see Armenia and Catalonia on the lineup. But that dissonance just helps reinforce the notion of cultural exchange at the heart of the festival, Motley said.

“The festival frequently highlights cultures or countries or occupations where people are like, ‘Wait, what does one have to do with the other?’ Part of it, there’s something very powerful in hearing people share their stories directly,” Motley said. “I can go on the Mall and hear this artisan from a part of Catalonia or Armenia, and I can see the work, but I can also ask them questions and learn from them what they do.

“People learn the specifics, but they also think about their own lives, make connections, ask questions and go back and explore. And, plus, they’ll have fun, really good food and great music in the evenings,” she added. “It’s going to be a really exciting 10 days on the Mall.”