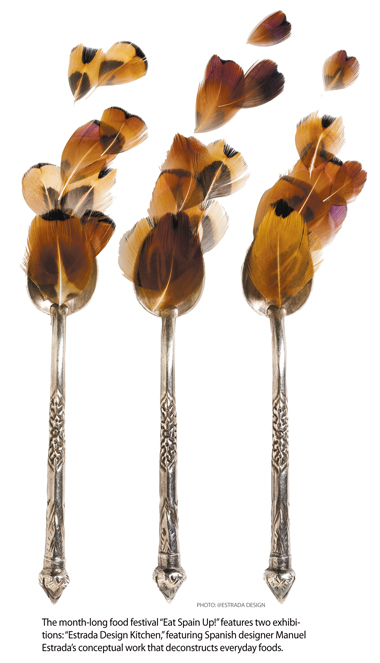 D.C. foodies mark your calendars: the Former Residence of the Ambassadors of Spain is hosting a month-long festival in October celebrating tasty treats from the country that brought us tapas and paella, among many other delicious contributions. “Eat Spain Up!” will explore the country and its regions through its traditional cuisine, culture and its new “gastronomic creativity.”

Chefs, producers, designers and experts will converge for the program, which includes discussions, screenings, lectures and, of course, tastings of regional foods, wines and iconic as well as avant-garde Spanish dishes. The residence will also showcase two related exhibitions on the synergy between design and food: “Spain’s Eleven. Eleven Gastronomy Icons from Spain” and “Estrada Design Kitchen,” focusing on the work of Spanish designer Manuel Estrada.

Gloria Rodriguez, founder and executive director of the “Eat Spain Up!” cultural initiative, is passionate about gastro-diplomacy. When asked about the foods she grew up with that she’s eager to introduce to D.C., she said there are some cheeses in Spain that she will look at and cry before she even puts them into her mouth.

Iberian ham in particular is what Rodriguez calls Spain’s “culinary star.” She spent two years in California as a teenager and confessed that she often dreamt about the cured meat while she was in the U.S. Rodriguez said she is excited for festival-goers to taste things no Spaniard can live without.

“Eleven Gastronomy Icons from Spain” highlights many of the fundamental building blocks of Spanish cuisine, including its renowned cheeses, wine, olive oil, fish preserves and its coveted ham, tracing a delectable journey across the country’s geography. Rodriguez will lead a lecture and tasting Oct. 3 on the various regions and tastes of the country.

On Oct. 19, a screening, discussion and tasting will take place with famed celebrity chef José Andrés, whose local restaurants include the Jaleo tapas chain, China Chilcano, Oyamel and minibar. Andrés will discuss the past, present and future of Spain’s acclaimed gastronomy revolution with food writer and scholar Anne McBride. Following the talk, there will be a screening of “Snacks. Bites of a Revolution,” a film chronicling the country’s food movement and its impact on the international dining scene.

The universal appeal of food and how it brings together different people is something Rodriguez has been thinking about, particularly for the last several years as she completes a master’s degree in food studies at New York University through a Fulbright Scholarship. “Maybe I don’t have the full answer yet, but I believe food and cultural expression need very little translation,” she told us. “When you taste food from different cultures, there is so much to experience, learn and feel, and you can do so without any previous knowledge — you don’t have to know the music or language of a country.”

A completely different take on food can be seen in “Estrada Design Kitchen,” a retrospective of Spanish designer Manuel Estrada’s conceptual work, which deconstructs the everyday elements of food that we take for granted and transforms them into striking works of art. Estrada, a leading graphic designer who recently won Spain’s National Design Award, riffs not only on actual ingredients, but also incorporates food packaging, corporate imaging and other materials to create bold, playful yet thought-provoking compositions.

Estrada spent a dozen years designing Spain’s most influential food and culture magazine, “Spain Gourmetour.” In 2011, the publication was awarded the “Cordon Bleu” prize for the best gastronomy magazine in the world.

“As from that moment on, many times when I am designing a book cover or a poster, images related to food come to my mind,” Estrada said.

Rodriguez pointed out that food is always on everyone’s minds, no matter where they are from, and that everyone has an intrinsic knowledge of the foods that define their heritage. “Eating is one of those five senses experiences,” she said. “It’s not just visual, it’s not just gustatory, everything comes into play.”