Home The Washington Diplomat April 2015 From Mediocre to Memorable: The Evolution of Ike’s Legacy 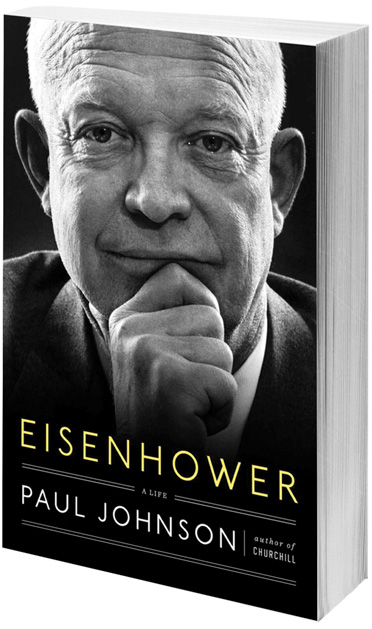 Dwight D. Eisenhower served as the 34th president of the United States from 1953 to 1961. Eisenhower was initially seen as a mediocre president who breezed through his two terms in office, delegating key decisions to others, explaining his policies in jumbled syntax and whiling away his free time by playing bridge and golf.

The defeat of Ike’s vice president, Richard Nixon, to the Democratic challenger, John F. Kennedy, in 1960 appeared to be at least a partial repudiation of Eisenhower’s presidency. When Ike left the White House in January of 1961, many experts viewed him as a good man whose personal and professional skills never quite translated into a strong presidency. For example, one poll by scholars in 1962 rated Eisenhower as 21st among the 34 American presidents.

However, Eisenhower’s stock has risen steadily over the past half century, and he is now often regarded as a superb president and is even ranked in the top five of all American presidents by some scholars. He is credited with keeping the American economy humming and defending the nation’s international position without stumbling into a catastrophic war with the Soviet Union or China. Additionally, declassified documents from his White House years show he was a far more active, engaged and sophisticated chief executive than most of his contemporaries appreciated.

Paul Johnson, a British journalist and historian, subscribes to and advances the view of Eisenhower as a fine man, model soldier and highly successful president in his book, “Eisenhower: A Life.” Johnson has written books on such wildly different people as Mozart, Charles Darwin, Socrates, Jesus, Winston Churchill, Napoleon and George Washington, as well as histories of the Jewish people and the modern world. Opinionated and self-confident, Johnson writes with sweep and authority. There are few traces of doubt or uncertainty.

In “Eisenhower: A Life,” Johnson summarizes and interprets one of the most consequential leaders of the 20th century. In less than 125 pages, he tells Eisenhower’s story from boyhood to death, pausing for analysis and commentary. The book relies exclusively on secondary sources and claims no original research. Still, it’s an excellent primer on Ike; most readers will enjoy and largely agree with Johnson’s laudatory but not entirely uncritical assessment of Eisenhower.

Eisenhower was born Oct. 14, 1890 in Denison, Texas and grew up in Abilene, Kansas, as the third of seven sons. He attended West Point military academy and was a solid but not stellar student. He graduated 61st in a class of 164 and was part of the fabled West Point Class of 1915 that had 59 men who became brigadier generals or higher.

Eisenhower rose quickly through the ranks, reaching lieutenant colonel during World War I. However, after the Armistice was signed in November 1918 and America’s peacetime Army shrank, his career stagnated. Even so, important mentors helped mold him into a fine soldier, including Gens. Fox Conner, John Pershing and Douglas MacArthur. Eisenhower had an important, if not always warm, relationship with MacArthur. According to Johnson, MacArthur’s view of Eisenhower shifted with the general’s moods. He once called Ike “the best officer in the Army” and on another occasion ridiculed him as the “best clerk in the Army.”

Eisenhower developed an expertise in industrial mobilization and honed his skills as a staff officer. Johnson argues that he became the best staff officer in the U.S. Army. Just days after the Pearl Harbor attack on Dec. 7, 1941, Ike was summoned by Gen. George C. Marshall to help him develop America’s war strategy. Marshall appreciated Eisenhower’s organizational skills and ability to devise solutions rather than just outline problems. Eisenhower directed the Office of War Plans and later was assigned to the Mediterranean theater, where he organized Operation Torch, the American, British and Canadian landing in North Africa. He also played a key role in the liberation of Italy before being named the Supreme Commander of the Allied Expeditionary Force in Europe. It was in this job that he planned and oversaw the Battle of Normandy, which Johnson calls “one of the big moments in history.”

After the stunning success of D-Day, Eisenhower led the Allied forces that drove steadily east, sending German armies into retreat and then unconditional surrender. He was later criticized by some military analysts for not seizing Berlin before the Soviets did, resulting in decades of Soviet hegemony over Eastern Europe. Eisenhower, though, believed that Allied soldiers rushing into Berlin would cause needless casualties and would break faith with the Soviets, who had suffered egregiously during the war.

Ike emerged from World War II as an American hero and a global superstar. He received a remarkable congratulatory note from Marshall who was never known for effusive praise of anybody. “You have completed your mission with the greatest victory in the history of warfare,” Marshall declared. “You have made history, great history, for the good of mankind and you have stood for all we hope for and admire in an officer of the United States Army. These are my tributes and my personal thanks.”

Upon returning to the United States after World War II, Eisenhower became the president of Columbia University, where he was known for prudent financial management and skepticism toward the academic world he then inhabited. He once described an intellectual as “a man who takes more words than is necessary to tell more than he knows.”

Eisenhower took a leave of absence from Columbia in October 1950 to accept President Harry Truman’s offer to become the Supreme Allied Commander in Europe in Paris, leading NATO during its infancy. He rebuffed several suggestions from Truman that he run for president as a Democrat and then decided to run for the White House as a Republican in 1952.

According to Johnson, Eisenhower approached politics with broad instincts rather than a well-articulated philosophy or a specific policy agenda. He supported balanced federal budgets with low taxes and tight spending controls, including on defense programs. A devoted internationalist, he also advocated a firm but not reckless American stance in the world.  He hated war. “Don’t go to war in response to emotions of anger and resentment. Do it prayerfully,” he once said.

Johnson describes Eisenhower’s 1952 presidential campaign as one in which he used his stellar reputation and the nation’s exhaustion with Democrats to trounce his opponent, Illinois Gov. Adlai Stevenson. But the author rebukes Eisenhower for acquiescing during the campaign to Republican Sen. Joseph McCarthy’s request that he drop a statement praising his former boss, George Marshall, in a speech in Wisconsin, where McCarthy had a large base of voter support. McCarthy, who rose to fame with his Red Scare demagoguery, became a frequent critic of Marshall, accusing the widely respected former secretary of state and defense of siding with the Soviets. 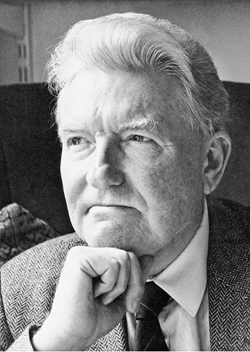 Johnson said Eisenhower’s capitulation to McCarthy’s unfounded attacks was an unforgivable mistake. “There came one moment of ignominy — the only one in his entire career — when he bowed to pressure in a manner that left him deeply ashamed for the rest of his life,” Johnson writes of the incident. “Ike regretted it immediately and never forgave himself. Before this episode and after, he often paid tribute to Marshall’s patriotism, but the damage was done and could not be repaired. It was a moment of turpitude and brought home to Ike the painful cost of politics in a way that nothing else could have done. He refused to talk about it — ever,” Johnson writes.

The author depicts Ike as a successful and purposeful president who selected a strong Cabinet and White House staff to manage a quietly effective government. Eisenhower, the author argues, was excellent at focusing on those issues that meant the most to him: low taxes, a balanced budget, a truce in Korea, restrained defense spending, prudent foreign aid programs and world peace. Eisenhower had a limited domestic agenda and believed, according to Johnson, that “time and prosperity would solve most problems, including civil rights.”

Eisenhower gave the United States “a decade of unexampled prosperity and calm,” Johnson declares in his book. “Seen from the perspective of the twenty-first century, the Eisenhower years, 1953 to 1961, were the climax of ‘the American century.’”

Johnson argues that Eisenhower’s personal qualities made him a success. He had a clear, analytical intelligence; wrote and spoke effectively; got along well with subordinates, peers and superiors; was a gifted problem solver; worked hard but always seemed relaxed, confident and unhurried; and identified specific goals that he pursued quietly but vigorously. There was also a shrewdness, even craftiness, to Ike that few appreciated. Johnson quotes Richard Nixon as saying, “I served General Eisenhower as his vice president for eight years. He was by far the most devious man I ever met in my life.”

Johnson’s “Eisenhower: A Life” is a good book that offers a clear and succinct summary of an admirable man and his impressive career. While an unabashed admirer of Ike, the author is also willing to criticize him when appropriate, such as his capitulation to McCarthy regarding his planned praise for Marshall.

I think Johnson gives Eisenhower too much credit for the Korean truce, which the Truman administration largely negotiated, and assigns too little blame to Ike for the future debacle in Vietnam, where Eisenhower played an early and important role. He opposed sending American grounds troops into Indochina to save the beleaguered French forces in 1954, saying, “This war in Indochina would absorb our troops by the legions.” But Ike did commit the American government to support South Vietnam in the aftermath of the Geneva Accords in 1954 that divided Vietnam into northern and southern regimes. He sent South Vietnam about $1 billion in assistance between 1955 and 1961 and deployed about 1,000 U.S. military advisers to South Vietnam

There are several areas that deserve more attention, even in a brief book. For example, I wish Johnson had written more about the 1960 presidential campaign in which Ike was conflicted about his role. He was deeply disappointed by the result and saw Kennedy’s victory as a repudiation of his presidency.

I would also have liked discussion of his 1953 appointment of Earl Warren as chief justice of the Supreme Court, one of the president’s most consequential decisions. In Warren’s first year, he drafted and pushed through a unanimous Supreme Court decision on the historic Brown versus Board of Education ruling that overturned the “separate but equal” doctrine and played a major role in advancing the civil rights movement. While Eisenhower had major misgivings about the ruling, he insisted on enforcing it and had his attorney general draft a major civil rights bill in 1956 that was approved by Congress in a scaled-back form in 1957.

I would also have liked Johnson to say more about Ike’s remarkably prescient farewell address in which the former five-star general warned about the dangers of a military-industrial complex and urged fiscal prudence and generational responsibility.

Nevertheless, “Eisenhower: A Life” is an excellent book for those seeking an introduction to Ike or a refresher about the life and times of a man still worth studying, understanding and admiring.