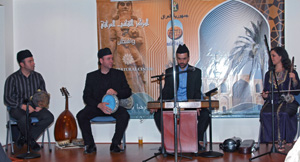 When it comes to Iraq, the ravages of war still dominate the headlines, but long before today’s turbulence, the country known in classical antiquity as Mesopotamia was home to the oldest civilizations in the world, with a cultural history spanning more than 10,000 years.

That’s the side of the country that the Iraqi Cultural Center in Washington has been working to highlight. Embodying that storied past, as well as hopes for Iraq’s future, is the Two Rivers ensemble of Middle Eastern and Western musicians who combine jazz with the traditional style of Arabic music known as maqam. The group performs May 11 and 12 at the cultural center as part of an Embassy Series-hosted concert.

Iraqi-American trumpeter Amir ElSaffar was behind the group’s 2008 debut album “Two Rivers,” whose title referred to the Tigris and Euphrates Rivers, as well as to the twin rivers of human blood spilled when Baghdad (a pillar of 13th-century civilization) was sacked by the Mongols. It also represented two streams of musical thought that merged Western jazz improvisation and Iraqi classical music.

“These artists are unique in the American scene and many are of Iraqi origin,” said Jerome Barry, founder and artistic director of the Embassy Series. “When they performed with us last year, people were enthralled with the high quality and entertainment value of their music. We feel that artists like this are great examples of musical diplomacy at work, the hallmark of the Embassy Series.”

Tickets are $80, including Middle Eastern buffet. For information, please call (202) 625-2361 or visit www.embassyseries.org.

Anna Gawel is managing editor of The Washington Diplomat and columnist for The Diplomatic Pouch.