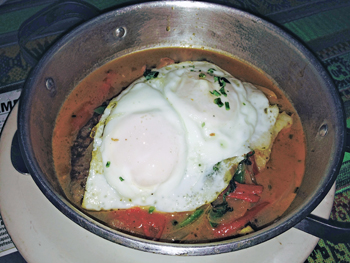 In the second installment of The Washington Diplomat’s globetrotting, two-part series on ethnic dining, we visit Bolivia, Yemen and Thailand by way of three suburban restaurants that stay true to their culinary roots.

As we explained in this space last month, The Diplomat — inspired by George Mason economics professor Tyler Cowen and his indispensable ethnic food blog — has been scouring the Virginia and Maryland suburbs in search of the most authentic and affordable ethnic eateries. While the District of Columbia certainly has its share of delicious international fare, we’ve found that some of the most exotic cuisine is found at lower price points — and with less pretension — in the suburbs. Last month, we had mostly good and entirely authentic experiences with Moroccan, Mexican and Burmese food.

This month, our first stop is Bolivia via Arlington’s Sibarita Restaurant. Sibarita is a comfortable establishment with a warm and friendly vibe that radiates South American authenticity. Situated near a blink-and-you’ll-miss-it tiny strip mall on bustling Washington Boulevard, the restaurant has a well-worn but clean aesthetic and excellent, friendly service. If the weather is nice, you may want to sit outside on the small patio enlivened by Latin music. But on an early fall evening, we chose to sit in Sibarita’s dining room, casual and cozy with warm red colors bathed in a soft light.

While some perceive Bolivian food to be overly meat-centric and sometimes bland, we were impressed with the variety of dishes at Sibarita. It certainly is not a vegetarian’s paradise but the menu holds a little something for everyone. We started with k’allu con pan — grilled bread with a spicy chimichurri sauce, homemade cheese, tomatoes and giant hominy. We weren’t really sure what to expect but the combination was warm and zesty and the boiled hominy added an interesting textural component. Since this is Bolivia, we had to try the pupusa, too, so we had the baked yucca with cheese version. The flat, cream-colored disk arrived hot and gooey — and quite tasty.

Meat, as one would expect, is the star attraction among Sibarita’s entrées, so we chose one dish featuring beef and one with chicken. The asado borracho — strips of tender, beer-battered steak with stewed tomatoes and jalapenos served with fried onions, potatoes and two fried eggs — initially was less assertive on the palate than I expected. But when the egg yolks were punctured and the other ingredients mixed into the soupy broth, the result was hearty and flavorful, and very South American.

Pollo soltado — sliced chicken fried with onion, tomatoes and fresh cut potato fries — was unremarkable except for the impressively tender chicken. There was nothing wrong with the dish; it just didn’t dazzle in any way. For dessert, we shared a piece of tres leches, a light, airy sponge cake soaked in a mixture of evaporated milk, sweetened condensed milk and heavy cream. The cake was just as delicious as it sounds without being too sweet and made for a nice close to the meal.

It’s worth noting we visited Sibarita on a Monday only to learn that the establishment prepares special Bolivian dishes on the weekend, including soups that aren’t available during the week. Next time we’re going on a Saturday night and ordering the caldo de castillo, a “simmering soup slow cooked with beef ribs, chicken, tendon and garlic served with potatoes, rice, scallions and peas.”

Moving on to our Yemeni adventure, we chose what appears to be the only authentic representation of this troubled Arabian Peninsula nation’s cuisine in the Washington region. Saba Restaurant, a small, clean, well-lit establishment on yet another small strip mall on the southern end of Fairfax, Va., is about a 40-minute drive from D.C. but worth the trip. 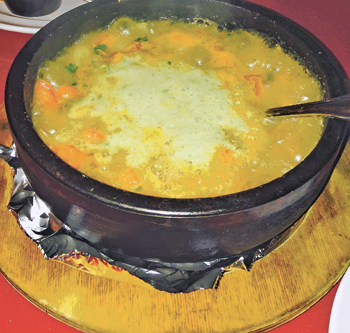 Saba’s menu is small but its flavors are big. We counted four appetizers, seven entrées and five desserts. We started with small meat sambousa and a bowl of lentil soup. Some sambousas are mostly fried dough with a small pocket of meat, but Saba’s were truer to the dish’s intended form: triangles of thin, crispy pastry dough filled with savory ground beef and spices — sort of like an Arabic egg roll. Each bite burst with flavor and we wished we had a couple more. But not to worry, the lentil soup arrived and it was also delicious. Unlike many lentil soups that contain whole versions of the legume, Saba’s was blended into a piping hot puree of lentils, simmered tomatoes, onions, parsley and spices. We were off to a very good start.

Moving on to the main course, we felt obligated to order Saba’s signature dish: haneeth, which is slow-roasted spiced lamb shank served with charred onions and long-grain rice. I had some trouble coaxing all of the ingredients from our server but an internet search revealed many of the flavors I detected, especially black pepper and cumin. Traditional haneeth also has turmeric and other Arab spices. This dish is truly exotic and stimulates the palate in ways most American cooking does not. The haneeth dish alone validated our trip to Virginia, but we went even deeper into Yemeni cuisine with the complex saltah, a traditional stew featuring cooked vegetables and topped with hilbeh, a fenugreek-based whipped condiment; served with sahawiq and warm pita bread.

Fenugreek leaves are a staple of Indian cuisine and taste something like a blend of fennel and celery. Sahawiq is a topping of blended tomatoes, jalapenos and fresh cilantro, much like Mexican salsa. The saltah dish arrived with a flourish, bubbling hot with an aroma that was literally mouth-watering. The hearty vegetarian broth has a deceptively spicy heat that built intensity with each bite. This dish was like almost nothing we’d ever had before.

For our final meal in this two-part series we chose Thai food, a form of Asian cuisine that has become quite familiar to the American palate over the past two decades. Our challenge was to find the most authentic version of Thai food we could — not just a plate of the goopy “drunken noodles” or run-of-the-mill pad thai so ubiquitous in the United States. We’re happy to say that Thai Taste by Kob, an out-of-the-way eatery tucked behind the main strip in Wheaton, Md., next door to Asian grocery store, cleared our high bar. The brightly lit restaurant takes its cues from Thai street food vendors. 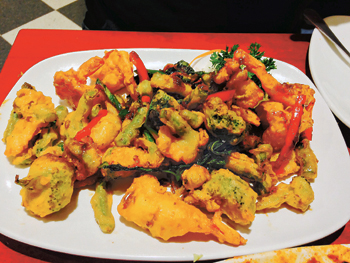 We started with traditional crispy spring rolls filled with piquant ground chicken. The rolls were perfectly fried and sliced into thirds, which made eating them a bit easier. A slightly sweet chili sauce had a vinegary kick and helped to cool the searing hot rolls.

Things got even more interesting when the larb gai arrived. Larb gai is a Thai salad consisting of ground chicken and herb rice mixed with red onion, cilantro and scallions in a lime dressing. We told our server we wanted Thai — not American — heat levels and the kitchen delivered. The tangy lime dressing hit the palate first followed by a rush of chili fire. The dish brought out our inner masochist as each bite was hotter, but better, than the last. Delicious.

Thai Taste by Kob boasts an extensive menu and navigating it takes some time. But it’s an enjoyable and adventurous exercise. I settled on the pad ped pla dook, a spicy stir-fried dish of catfish filets in red chili paste with rhizome (a form of ginger with its own distinctive and tangy flavor), young peppercorns, Thai eggplant, green beans, jalapeno, red bell pepper and crispy basil leaves. The warm aroma of the various ingredients, especially the basil, was almost as intense as the flavor of the sizzling hot, flash-fried catfish filets. This dish was fun to eat, too, simply because of all the different textures. The little Thai eggplant halves were especially appealing and had a slight crunch.

We also tried the goong tod lard prik — deep-fried shrimp, broccoli, green beans, carrots and onions topped with chili garlic sauce and, again, crispy basil leaves. This dish was sweeter and, while fried, not too heavy. Thai Taste by Kob consistently showed its skill and we left satiated and beyond impressed.

Over the past two months, we’ve barely begun to demonstrate the range and complexity of ethnic dining in the Washington suburbs, but we hope you’re inspired to embark on some exotic culinary adventures of your own.