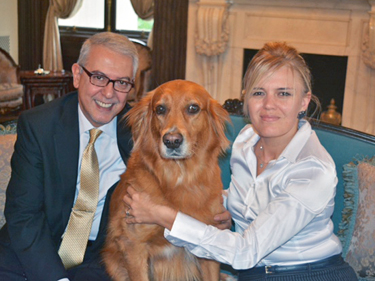 Maggie, a 6-year-old golden retriever, was the matchmaker who brought Sinem Kiliç together with her future husband, Turkish Ambassador Serdar Kiliç. “My dog Maggie introduced me to my husband and changed my life,” Sinem said of the handsome pup, who was born in an Ankara animal shelter with a ruptured stomach and was not expected to live. Sinem took her home when she was only 35 days old.

“When I went out to walk Maggie, I would see Serdar and his teenage son, Eren, walking their dog Spicy, a Dogo Argentino [Argentine mastiff]. I got to know Eren and we were forming a friendship,” Sinem recalled.

“One night around 11:30 p.m., Eren came over and told me he wasn’t feeling well and asked if he could talk with me. He said, ‘When we go [move] somewhere else, I want to live with you. Can you marry my father?’ I was wondering if his father had set this up, but around midnight Serdar called … and asked if I had any idea where Eren was. The next day we went over the story and he laughed, saying, ‘My son is very clever and he has the right idea.’”

Sinem Kiliç, right, met her husband, Turkish Ambassador Serdar Kiliç, during her walks with her golden retriever Maggie, whom she rescued from an Ankara animal shelter.

Although she knew their Ankara neighborhood included the homes of diplomats, judges and top government officials, she didn’t know what Serdar did. “When I asked him he said, ‘I am a secretary in a government building.’” It was only later that she says she found out that Serdar, 57, was secretary-general of the country’s National Security Council, having returned to Turkey in 2010 after serving for two years as its ambassador to Lebanon.

“After that, we dated only three months before we were married. He introduced me to his parents and his father fell in love with me so we planned to be married on his father’s birthday. A month later, we left for Japan,” where he would serve as Turkey’s top diplomat and they would be honeymooners abroad.

A computer programming major at Ankara University, Sinem worked for the Turkish Petroleum Corporation Computer Programming Center and various private businesses and corporations from 2001 to 2012, so diplomacy was a new world for her.

“I fell in love with a man. He could have been poor; he could have been rich. It didn’t matter,” she told us. “My wonderful husband has given me the opportunity to see the most amazing places.

“I loved Japan — it was like a dream,” she added. “Tokyo is very clean, very respectful and fun. The Japanese are lighthearted and don’t let the ‘spirit of a child’ die within, no matter how old they are. The people love nature and children. The children call me their Turkish mother.”

While in Tokyo, Sinem wrote a Turkish cookbook based on simple Turkish cooking, featuring low-calorie, healthy recipes, and she would like to do a similar venture here.

“Washington is very similar to Ankara, but Ankara is not as green. Both are government cities with government buildings — the same rules and way of life,” she reflected. “I didn’t think I would love Washington as much as I do. Washington was made for living. If I had to choose an American city to live in, it would be Washington.”

Sinem and her husband also live in a historic D.C. landmark, a stately property on Sheridan Circle where the city’s first desegregated jazz concerts were famously held in the 1930s and ’40s.

The lore associated with the residence can be a bit intimidating, Sinem admitted. “I feel like a museum curator, needing to know everything about everything — the pictures, the antiques,” she said. “I’ve made some small changes including lightening up the ceiling. The house was too dark.

“Our residence in Tokyo was totally different, a very modern building. Here, I sometimes feel scared like there is some spirit who might say, ‘Hello, I used to sit in that chair before you,’” she joked of the building originally designed by renowned Washington architect George Oakley Totten Jr. in the mid-19th century. Today, her stepson Eren, who is now a freshman at Koç University in Istanbul, enjoys using the indoor pool when he visits.

Although this 36-year-old former computer programmer sometimes feels as if she’s living in a diplomatic dreamland, Sinem appreciates both how fortunate she has been and the serious problems her country back home faces.

Located at the crossroads of Asia and Europe, Turkey has felt the reverberations of turbulence throughout the Middle East, along with its own domestic volatility (also see “Turkey Confronts Threats Close to Home, Critics Abroad” in the March 2015 issue).

Between the civil war raging in Syria and the Islamic State’s rampage through Iraq, Turkey is expected to absorb nearly 1.9 million refugees in 2015. The government of President Recep Tayyip Erdogan has also launched a military offensive against Kurdish militants, resuming a conflict that has claimed more than 40,000 over the last 30 years. And last month, twin suicide bombings — the worst terrorist attack in the country’s modern history — rocked the capital of Ankara, killing nearly 100 people and igniting heated accusations ahead of a snap election called by Erdogan.

“Not only as a Turk but also basically as a human being, I am deeply saddened by the loss of innocent lives in Ankara as a result of this terrorist attack,” Sinem said. “What I have learned is that when you are far away from your home country, you are affected much more by the developments there. It is a feeling that is hard to describe. My husband and I mourn the victims of this tragic incident.”

Sinem added, however, that the recent turmoil should be put into perspective of the country’s larger evolution as a tolerant, secular democracy and growing economic power of 75 million people.

“Turkey is an island of democracy and stability in a very volatile region. It is a democratic, secular republic with a rich, diverse culture. With its Muslim population and a fully functioning democracy, Turkey is also an inspiration for the peoples of other countries in our region,” Sinem said.

“From my experience in the United States, Americans think that Turkey is solely a Middle Eastern country,” she continued. “In reality, Turkey is geographically, historically, culturally and socially a country that is located between Europe and Asia. It is not only a bridge between east and west, but also being a developing country and a member of G20, economically speaking, it is also a bridge between north and south.

“Because of Turkey’s geographical location, many ancient civilizations lived there, which is why historians call it ‘the cradle of civilization.’ I wish everyone knew Turkey’s historic richness and could have a chance to visit and experience the diverse culture and delicious cuisine. I wish more Americans knew the importance of Turkey for Christianity — that the Virgin Mary lived for a long time in Izmir, Turkey, after the crucifixion of Jesus Christ,” she noted.

For her part, Sinem has enjoyed traveling the United States and learning more about American culture, citing New York, Chicago and Los Angeles as her favorite cities to visit. She almost always accompanies her husband on his official trips, though Maggie, the golden retriever that brought them together, stays at home.

As a young girl, Sinem was always fascinated by animals. “I brought all the stray dogs in the neighborhood home. I would put them in the bathtub, the kitchen — everywhere there were dogs and my mother was afraid of dogs! We’d call the vet and have them all vaccinated and then we’d release them back into the neighborhood. I always wanted to keep all of them for one night in my bedroom but my mother never agreed.”

Today, Sinem is able to do more, lending a helping hand not only to animals but also to other causes close to her heart. She especially enjoys contributing her time to orphans, children in need of foster homes and pets that end up in shelters. “In Japan I worked in the orphanages, with the underprivileged and the poor,” she said, noting that she would like to foster a child in the U.S. but hasn’t been able to arrange that yet. “There is a one-and-a-half year program to complete before you can become a foster parent. We might not still be here.”

“I brought presents from Turkey to give these children. I want to be the big sister they are missing. I want to hug them. If I can save a life, my life is complete — animals as well. Everyone has only one life. We should live life to the fullest.”