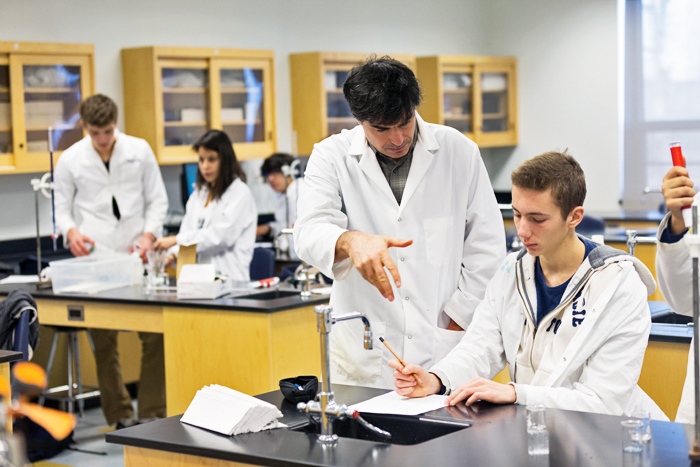 Despite the European Union encompassing 24 official languages and more than 60 different regional or minority languages, more than 75 percent of its primary school students learn English as a foreign language, according to the Pew Research Center. In contrast, as of 2008, only 25 percent of elementary schools in the United States even offer another language to students.

Lycée Rochambeau allows students to obtain their U.S. high school diploma at the end of the 11th grade and their French Baccalauréat in 12th grade. After graduation, 60 percent of students pursue their education in the U.S. and Canada.

In the Washington metro area, one school has been producing fully bilingual — if not multilingual — graduates for decades. The Lycée Rochambeau, or French International School, which started with a dozen students in 1955, is celebrating its 60th anniversary this year and continues to be the go-to for families who want their children to receive a French education.

Why French, in particular? While many foreign language learners turn to Spanish or, more recently, Mandarin, French is still widely spoken in Europe, Africa and the Caribbean. Moreover, many international organizations cite the language as one of its official tongues, not to mention the United Nations and EU institutions in Strasbourg, Luxembourg and Brussels. Though the idea may be outdated, some also turn to French because it is the language of romanticism and music. There are more practical reasons to say oui to French: money. MIT economist Albert Saiz calculated that the premium for speaking French translates to a 2.3 percent bump in an annual salary.

Whatever the reason, people are still pursuing studies of the language, with the International Organisation of La Francophonie (OIF) estimating that the number of French speakers will increase to over 700 million by 2050.

For many families, enrolling their children at Rochambeau means preserving a certain continuity with their French or Francophone heritage. Roughly 30 percent of this year’s student body holds French citizenship and 64 percent of the students have nationalities from countries where French is the official language. One parent, Marie-Noelle Hunt, was born in Vietnam but her family immigrated to Paris when she was young and she sees French as her first language. She wanted her children to have the same immersion. Her son is currently in the 11th grade at Rochambeau, and her daughter graduated in 2014.

“When they have gone to France during the summer vacations to visit their grandmother and the family, they have had no problem communicating and fitting in,” said Hunt.

Rochambeau Director of Admissions Valerie Meriot-Burn says this kind of continuity helps parents who move in and out of the French school system. Parents don’t have to worry about traveling abroad for a few years, because they can rest assured that their child will receive the proper French equivalent at Rochambeau.

Another parent, Sandra Bechan, was born and raised in Chile, while her husband was born and raised in Massachusetts. Their daughter, Amanda Stavisky, started at Rochambeau as a 10-year-old and in 2015 was awarded a full four-year scholarship to study at the University of Maryland’s honors program. For Bechan, choosing French was a way for her daughter to better understand her roots — Bechan’s father was born in Argentina to Belgian and Franco-German parents.

“To me, that Amanda has reconnected with the French language and culture is a way of recovering her connection with part of my family roots,” said Bechan. “[Learning French] is very meaningful and deeper than just the intellectual value. There is sentimental value for me, in Amanda’s French-related studies and accomplishments.” 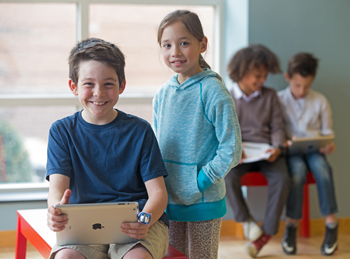 Many parents at Rochambeau, however, aren’t French but simply want their children to be exposed to other cultures and languages. One such parent, Patrick Shroads, grew up in Brazil speaking Portuguese. His wife, Amy Shroads, speaks German with family members from Austria, so languages are important to the couple. Neither has a previous connection with the French language, so they have been learning it along with their son, Eli, an 8-year-old at Rochambeau.

“I feel strongly that Eli should learn about other cultures, other people, other ways of doing things,” Amy said. “We’re fortunate that we can offer him this.”

While many of these parents may not have a French background, a vast majority is exposed to different cultures in one way or another. Meriot-Burn said that in the long term, the school would also like to encourage families already living in the area, who may not have much international exposure, to see the benefits that learning a foreign language could have for their kids — including improved cognitive and problem-solving skills, as well as more job opportunities in an increasingly globalized world. In New York, similar efforts to introduce French to underserved areas are being piloted by the French Embassy’s education attaché, Fabrice Jaumont, to provide access to dual-language programs in areas of Brooklyn, Queens and the Bronx that are increasingly filled with Francophone speakers.

This consistent immersion and worldly exposure help students develop skills that contribute to their success after high school. By offering both a French baccalaureate and a U.S. diploma, the school opens doors in this country and beyond. In 2015, 43 percent of Rochambeau graduates stayed in the United States, while 28 percent went on to pursue opportunities in France. Others were accepted into universities in Britain, Italy and Turkey. This academic flexibility and universality adds to the school’s appeal and offers students a firsthand experience in a multicultural setting that helps them take the next step in their education.

Sarah Curtis, a 2015 Rochambeau graduate who attended the school since age 4, is currently a freshman studying biology in the University of Maryland honors program. Curtis, who was born in the Parisian suburbs but has roots in Guinea, credits her education at Rochambeau with helping her make the transition to college.

“In college, you find yourself befriending a diverse group of people, just like at Rochambeau,” Curtis said. “I feel very comfortable integrating with different social groups and can feel at ease with a great number of people that I meet. We focused on respect at Rochambeau — respect of other people’s cultures, opinions, etc.”

While many schools offer foreign language instruction, the standard model is generally constrained to a limited number of hours per week. Many parents who spoke to The Washington Diplomat lauded Rochambeau’s focus on full immersion — not only in the language itself, but also in the French way of learning and doing.

“What we offer … is not just an opportunity to acquire a new language; it’s the opportunity of absorbing a dual culture,” said Catherine Lévy, Rochambeau’s head of school. “Our aim is to give our students the best of two worlds: what the French school system does best — wide-ranging knowledge and culture générale, i.e., a comprehensive and rigorous program — with what the U.S. school system does best, which is having a holistic understanding of and approach to the students.”

Families with children enrolled at Rochambeau represent over 30 embassies, international institutions including the World Bank and IMF and over 70 different nationalities. The school’s three campuses in Northwest D.C. — Bradley, Rollingwood and Forest Road — have 1,030 students from preschool to high school enrolled this year. But in a sign of the enduring demand to learn French and the bright prospects for Rochambeau, the search is on to find a location that can house everyone in one place.