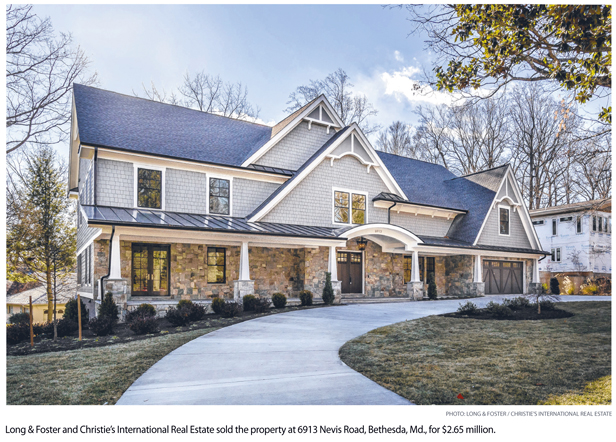 Sales in the Washington metro area’s luxury housing market are experiencing strong growth in early 2017, following steady growth the year prior, according to a report from Long & Foster and Christie’s International Real Estate.

Prominent upscale neighborhoods in the District such as Spring Valley, Georgetown, Cleveland Park, Capitol Hill and Kalorama, which got some especially notable neighbors this year in the form of the Obamas and Ivanka Trump and Jared Kushner, for example, saw the number of homes sold increase to 1,108 in 2016 from 1,003 in 2015, according to the 2016 Capital Region Market Report.

“We’re not exactly sure what is driving the increase,” Detwiler said. “There’s a significant increase of 40-plus percent in sales in the first quarter and inventory is basically flat, up just very slightly to where it was last year. I think one of the important points to make is that those numbers and that performance in the luxury market is different from the regular market — general stock housing — where sales were up just a little bit from last year and inventory is actually way down.”

A few factors could be contributing to the luxury market’s movement, Detwiler added. For example, homebuyers may have taken a break from shopping during the election season.

“In those immediate couple of months before and after the election, we saw a lot of the luxury buyers step to the sideline,” he said. “I think that they’re very astute buyers and they just stepped to the sideline to see how things transpired.”

Additionally, the weather could be another element. A relatively mild winter without much snow meant more people were out house hunting, unlike in 2016, when a massive snowstorm dumped about 30 inches of powder on the area, crippling transportation for days. Of course, that begs these questions, Detwiler said: “Were the sales depressed last year in the fourth quarter because of the weather issues that we had? Was this year so much better than last year or was last year’s depressed and this year is more normalized?”

In general, when consumer confidence is up, housing sales follow suit, he added, and although the Consumer Confidence Index fell some in April compared to earlier in the year, it’s still at strong levels, according to the Conference Board, which publishes the index.

Overall, the report found, inventory tightened and drove a sellers’ market. While historically low mortgage rates benefit buyers, Detwiler said those interest rates, which now hover around 3 percent — “a once-in-a-lifetime opportunity for mortgage financing” — also limit buyers’ options because sellers are staying put. “I’ve got financing on my house that I’m never going to be able to get again. Is now the time to sell and give that up?”

Overall, much of what the report found was unsurprising, Detwiler said, but a change in the type of housing that is selling was interesting: condos, co-ops and townhomes. Most neighborhoods saw increases in the median sales prices among these categories of homes. For instance, the median sales price for condos and co-ops in Capitol Hill went from $399,999 to $434,000.

“I think that obviously makes a lot of sense with the continued drive of vertical living and some of the multifamily stuff that we’re seeing,” Detwiler said. “All of the new product that comes out, for the most part in that area, is really condominiums or townhomes, so it’s high-density stuff. We see there’s very little new homes that are being built.”

Looking to the rest of 2017, Detwiler remains optimistic about the luxury home market, expecting it to remain a sellers’ market with quick turnaround sales. 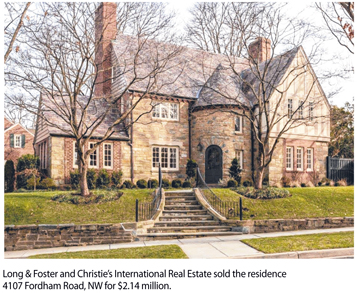 “The only caveat that you put in there is that war doesn’t break out some place or there’s a significant fall in the stock market,” he cautioned. “Any of those world events push people to the sideline for a period of time.”

Another trend to watch in D.C.’s suburbs is a growing migration by older generations to more urban settings, paving the way for the next flock of homebuyers, Detwiler said.

“As the population gets a little bit older, owners of large homes further out in the Great Falls and Potomac, Md., area, they’re moving into their empty nest phase or later years,” he said. “We’re seeing them looking to sell in those areas and then move in closer to the District itself or into closer communities with more access to an urban living-type of environment. I think what that may actually create is a really interesting opportunity for the younger generation to move into areas like Potomac and Great Falls earlier than maybe they would have thought they could have, because I think there will be some buying opportunities there.”

Long & Foster | Christie’s is the number-one seller of luxury homes in the Washington region, selling over 19,300 properties in the area valued at $10.4 billion in 2016.