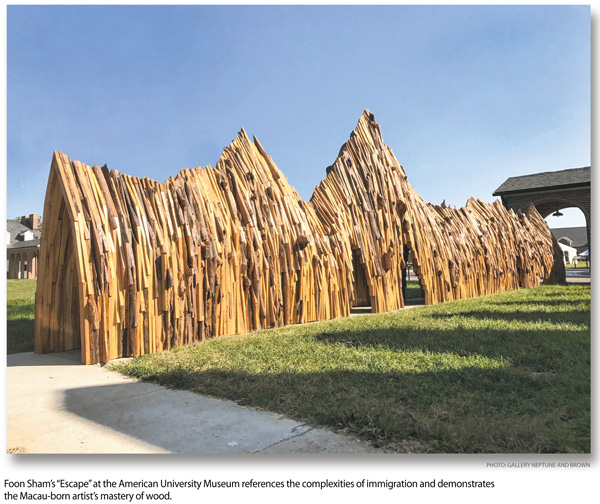 The massive wood sculpture at the American University Museum offers a fun escape from the outside world, allowing visitors to wander through a fairytale-like woodland tunnel.

But “Escape” by artist Foon Sham goes deeper than a lighthearted journey into Sham’s material of choice, wood.

Sham, a local artist born in Macau, said he wanted “Escape” to comment on the polarizing debate over the U.S.-Mexico border, with the outdoor sculpture’s craggy ridgeline meant to represent American mountain ranges.

“The upper silhouette of the sculpture was derived from the U.S.-Mexico border line on the map,” Sham said. “I am an immigrant who was legally naturalized to become a U.S. citizen of this country, and I am sympathetic to those who also wanted to escape from their unwanted governments and countries, risking their lives to chase the American dreams.”

Sham, a professor at the University of Maryland known for his mastery of wood, said he hopes visitors realize that building a physical barrier is not necessarily a solution to the problem of illegal immigration — both here and in Europe — as people will find a way to escape the confines of their situation.

“Each time, he has come through with more ambitious and accomplished work. I consider him one of the top sculptors working in the region,” Roulet said.

Sham welcomes a political reading of his work, Roulet added. She said he is sympathetic to the plight of refugees, being an immigrant himself.

Sham also built the outdoor piece at the Lorton Arts Workhouse, which was formerly a federal prison.

“One artist who was there researching the imprisonment of suffragettes in the early 20th century associated ‘Escape’ and the tunnel imagery with the history of political prisoners,” Roulet noted.

Of course, there are other messages Sham’s “Escape” conveys. Dualism, as seen in the Taoist yin-yang dichotomy, is a consistent theme in Sham’s work, and the two tunnels at the AU Museum — one horizontal, measuring 62 feet long, and the other vertical towering 36 feet high — hint that people can escape their surroundings both physically and spiritually.

“Foon Sham also wants the interpretation of escape to be broader than just meaning physically. Escape can also be spiritually or mentally,” Roulet said.

Sham has been building participatory, large-scale vessel forms since 1997. His work offers visitors an immersive experience that plays on the senses, using sight, temperature and even smell. Almost all of his previous pieces were constructed upward and have an opening to the sky.

“When I first saw the outdoor sculpture courtyard at Katzen [Arts Center] at night, the row of lights on the ground inspired me to make a horizontal structure that would enclose both the lights and the people walking through it,” Sham explained. “I was also inspired by Gaudi’s architecture [seen in] the Sagrada Familia [Basilica] in Barcelona from a recent visit in 2015, and the landscape and rock structure in Utah and Colorado on a cross-county trip to the West in 2014.”

Building a sculpture of this scale has been in the back of Sham’s mind for a while. It wasn’t until the past two years that he received the necessary resources and support from vendors to create the project. The Workhouse Arts Center in Lorton allowed Sham to build the sculpture on its grounds while the Katzen Arts Center provided the space he needed for the site-specific sculpture he envisioned.

Beyond its political undercurrents, “Escape” promises to be a hit among children.

Going into one of the majestic vessels feels as if you are entering a wooded forest.

“One thing that we noticed at the opening was that both the interior and exterior sculptures, which can be entered, were very popular with children,” Sham said. “I do think they have a magical, imaginative appeal, especially for children, because they have the feeling of a tree house, or secret hideaway that is child-scale.”

Once inside, visitors can stroll through the museum’s other current exhibitions, including “Green Machine: The Art of Carlos Luna,” which features over 65 works from one of Cuba’s leading contemporary artists, including his experimentation in Jacquard tapestries, works on metal sheets with patina and aluminum leaf, and layers of natural materials rubbed into French paper.