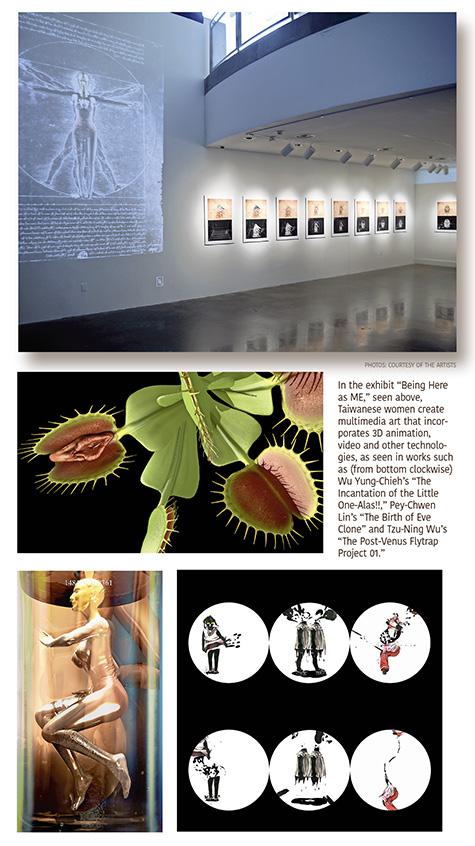 Women steal the show at the American University Museum this summer, but instead of tackling gender-specific themes, the artists offer compelling, diverse insights into broader issues ranging from the environment to colonialism — all while reflecting on the past and the future.

“Being Here as ME – New Media Art Exhibition of Women Artists from Taiwan” uses cutting-edge technology such as augmented reality and animation to explore anxieties about science, the environment and technology itself.

Meanwhile, Maia Cruz Palileo’s paintings examine the American colonization of her native Philippines, as well as her personal story of growing up as a Filipino American.

In “Being Here as ME,” Taiwanese artist Pey-Chwen Lin has created three series of works, including two videos, “Making of Eve Clone I” and “Birth of Eve Clone,” that incorporate 3D animation and 10 pieces of digital prints.

“Through my ‘Eve Clone’ series, I wanted to bring the issue that we humans should respect the original creation of God instead of using technology to modify God’s creations,” she said. “That is why I named my work ‘Eve Clone.’”

To make her point, Lin ironically does just that — she manipulates historic Biblical depictions with technology, using a Leonardo da Vinci manuscript as her starting point. The end result is an interactive amalgamation of new and old.

Lin overlaps the original depiction in da Vinci’s document with a line sketch and grid of Eve Clone’s head and hand using computer software that Lin designed herself to create a digital rendering that both complements and contrasts with da Vinci’s vision. In the final print, the upper section shows a metallic-forming head and right hand, while the lower part shows the Biblical Book of Daniel and Revelation mirrored in da Vinci’s writing. The final touch uses augmented reality to transform “Eve Clone” from a static print into a dynamic video life form that engages and interacts with the viewer.

Curator Yu-Chuan Tseng said Lin’s “Eve Clone” series is one of her favorites in the exhibit.

“It is the first time that Taiwanese women artists in new media art are invited to have a show in D.C.,” she pointed out. “In this exhibit, women artists express their concerns and create artworks to show their anxiety and opinions about the ecology of society, science, technology and the environment with new media technology.”

Artist Laza Wu became involved in the project through Tseng, who was one of her Ph.D. committee members. Wu’s artwork considers the ramifications of future technologies on the human body, from artificial foods to artificial life forms.

Wu has three pieces in the exhibit, two of which are from the same “Posthuman Farm Project 2016” series.

“These works are all based on the real biotechnology development of synthetic foods and future agriculture and about the moral issues after genetic modification and [the existence of] artificial life forms,” she said.

While “Being Here as ME” examines high-tech innovations and modern-day concerns from a Taiwanese perspective, Maia Cruz Palileo’s paintings take a look back at the history of her native Philippines. A small but signature work is “Burying Teeth,” which refers to the act of burying and uncovering as a metaphor for unearthing the historical narratives of her homeland’s colonial past. 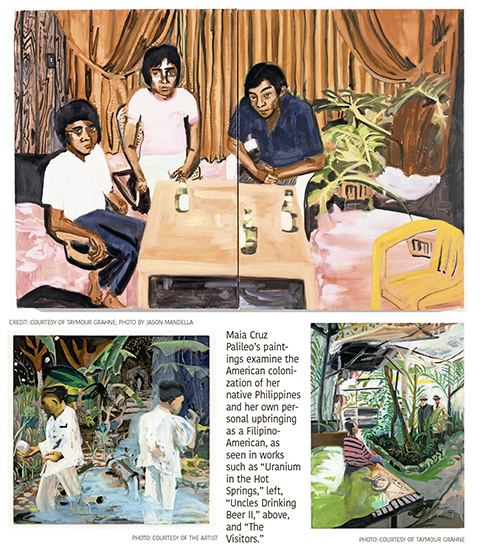 Palileo’s work features overarching themes of belonging and not belonging. She uses brash, vibrant brushstrokes to replicate photos from the U.S. government’s archives depicting anthropological documentation of Filipinos during the American colonization. In addition to the political, however, Palileo offers a personal take on her heritage by copying figures from old family photographs, recreating the intimacy of a traditional family album on a canvas of vivid paint colors.

Isabel Manalo, curator of the exhibit, first saw Palileo’s painting “Nochebuena” while living in Berlin in 2014.

“The feeling of the painting was nostalgia and familiarity with that kind of family gathering,” Manalo said. “I loved her brushwork and color and seeing her work in person.”

As a fellow Filipino American, Manalo said that growing up, she hardly saw any Asians — much less Filipinos — in politics, the media or the arts. She called Palileo’s work personal.

“It’s a great way to step into the psyche of a Filipino American, where our position in the U.S. has always been invisible and or as diminutive little brown brothers, as we were regarded by the American colonialists,” she said.

Manalo herself is an artist who also explores issues of geography and post-colonial identity. She is currently working on a new body of work that consists of large-scale abstractions inspired by codes, symbols and language (her work can be seen at Addison/Ripley Fine Art, located on Wisconsin Ave., NW).

Diversity and heritage, both global and local, are hallmarks of exhibitions at the American University Museum, as seen in the other shows being featured this summer. That includes “Passages,” in which Jamaican-born artist Keith Morrison highlights Afro-Caribbean and Meso-American art and architecture while reflecting on the somber history of the Middle Passage slave trade. On the local front, “Plans to Prosper You: Reflections of Black Resistance and Resilience in Montgomery Country’s Potomac River Valley” is a multimedia exhibition produced by AU graduate students and members of historic black churches in D.C. that examines the role of the black church in fostering social change.