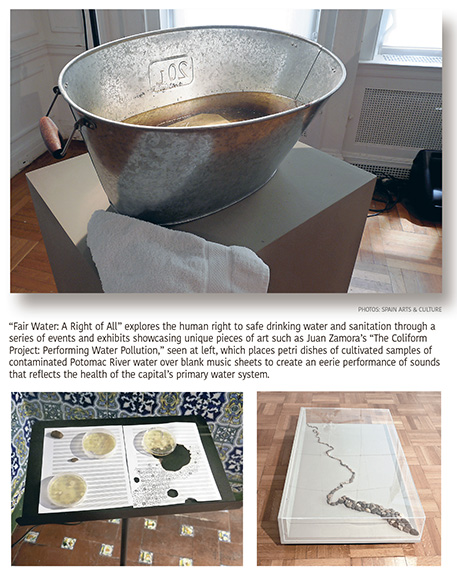 According to the California-based Pacific Institute, violent conflicts related to global water resources have indeed increased, while the World Bank reports that nearly 2.2 billion people live without safe drinking water and 4.2 billion without safe sanitation. Inequality in the distribution of water resources poses an existential threat to economic progress, the eradication of poverty and basic peace and stability, as studies by the World Bank and other organizations have shown.

It is timely, then, that the Embassy of Spain, in collaboration with the Mexican Embassy, the Inter-American Development Bank and other organizations, is spending this long, hot summer focusing on water justice. “Fair Water: A Right of All” is a series of events largely hosted at the Former Residence of the Ambassadors of Spain on 16th Street, NW, that explores the human right to safe drinking water, sanitation, sustainable practices and the effects of environmental degradation on water resources.

A centerpiece of the series is a group of collaboratively produced artworks and exhibits that focus on the debate over water resources and illustrate how art may be used as a tool for action and even transformation. The workshops and artworks, collectively titled “The Water Office,” match professional artists from Spain, Mexico and the U.S. with volunteer participants to create works that reflect on the centrality of water in human life and the challenges to its access and safety.

Juanli Carrión’s “PhDC” is part of a larger series in which the New York-based artist creates textile installations that reflect the pH balance (i.e. acidity) of various water systems. For “PhDC,” Carrión and his collaborators used locally cultivated purple cabbage to create pH-sensitive dyes that, when applied to fabric, reflect the contamination level of the water in which the dyeing process takes place. The colors of the hanging fabrics in “PhDC” range from olive green to slate gray and harvest yellow, reflecting the pH balance or imbalance of the water samples. The samples taken from the Potomac River and the Tidal Basin all fell within the more or less normal range of pH 6.5 to 8.5. However, the sample from the Anacostia River — represented in the harvest yellow dye — is, at pH 5.5, the most acidic of the lot, reminding visitors of the inequities of water resources in the Washington region itself.

Spanish artist collective Basurama and local artist Rachel Schmidt take a different tack, inviting visitors to “bottle” their memories of water in “Water Memories Itinerant Office.” The participatory exhibit consists of hundreds of plastic water bottles that, by means of written notes, images and designs, are the vehicle for individual human stories about water, its usage and the threats to it. Bottles are artistically presented along a wall and clustered on the floor before a video projection of a large trash heap — the end to which they go. The artists ask us to reflect on the life cycle of water as both an element of nature and of human consumption. In fact, Basurama’s artistic practice revolves around rethinking trash — in this case as the inevitable human byproduct of an often idealized element of nature. 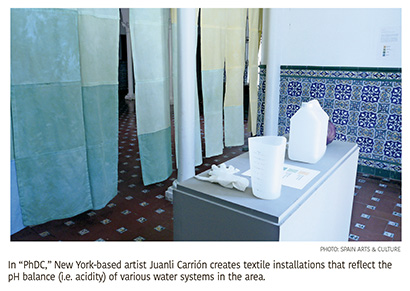 Visual artist and filmmaker Elena Lavellés focuses her work on resistance to policies of exploitation, including the exploitation of nature. The exhibit “Strategic Contamination: Viral Sustainability” includes a multimedia installation of photos, artworks and found objects related to a visit Lavellés and collaborators took to D.C. Water Blue Plains Advanced Wastewater Treatment Plant, the largest plant of its kind in the world. The exhibit also includes a “Manifesto For Viral Sustainability: Water,” which encourages readers (and listeners of an accompanying audio track) to “[u]nderstand the connections between the water cycle, water sustainability and the role that humans have.” The purpose is to help visitors reflect on the value of water and how they can impact the use and stewardship of it.

Tania Candiani’s “Walking the River” was inspired by renowned scientist and explorer Alexander von Humboldt, who traveled extensively in the Americas at the turn of the 19th century and is credited with being the first scientist to warn of the dangers of human-induced climate change. “Walking the River” centers on a meditative audio-visual essay recorded along the popular Billy Goat Trail that runs between the C&O Canal and the Potomac River. It also includes segments of von Humboldt’s personal narrative of his travels in the Americas (he visited then-President Thomas Jefferson and others in Washington), as well as drawings, writings and found objects contributed by Candiani’s artistic collaborators. Like the other installations, “Walking the River” represents a project, an artistic collaboration and a call to advocacy.

One part of the “Fair Water: A Right of All” series can be seen from 16th Street in a space shared by the Former Residence of the Ambassadors of Spain and the Mexican Cultural Institute. “La Cascada (Let’s Go fetch Water!)” is a 13-foot-high, 30-foot-long public art installation of hundreds of recycled water buckets placed on a large cantilevered shelf. Water runs around and between the buckets as it makes its way toward the ground. Designed by the Spanish art collective Luzinterruptus, “La Cascada” is meant to remind viewers of the daily struggles that ordinary people around the world, especially women, go through to provide life-giving water for their families. The water meanders slowly, rather than rapidly, around the cascade of buckets, emphasizing its preciousness for those who make long, sometimes hazardous, journeys to collect it each day. Not a drop must be lost.

This is an important message for us in America who tend to think of water as an ever-renewable, inexhaustible resource. “Fair Water: A Right of All” creatively reminds us that water is indeed a limited resource that we share with the rest of the planet. And as the collaborative nature of these artworks suggests, finding solutions to the equitable distribution and safety of water must be a collaborative effort, too.

Fair Water: A Right of All