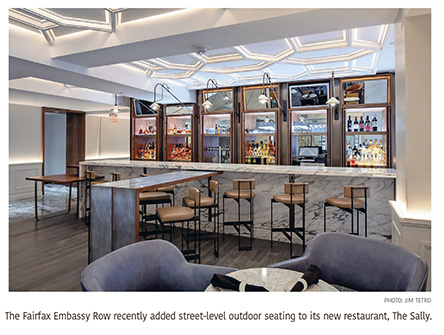 With just one month of summer left, it’s time to make sure you’ve taken full advantage of all that the nation’s capital has to offer during the warmer months. Of course, for some, that means outdoor pools, hiking, beach trips and standup paddle boarding. But we aren’t talking to those folks. No, we are highlighting some of the best outdoor spaces at hotels right here in our backyard, where Washingtonians can eat, drink, be merry, cool off and maybe take in some pretty spectacular views.

The Sally at the Fairfax at Embassy Row

This recently renovated hotel added street-level (read: prime people-watching) outdoor seating to the hotel’s new restaurant, named after Sally Cary Fairfax, the wife of a prominent member of the landed gentry in late colonial Virginia. The terrace seats 22 and features a portable bar cart from which mixologists can create drinks in front of guests.

To go with the new look, there are seasonal dishes inspired by French chef Ricardo Planas, such as the three-asparagus salad with a 63-degree egg; pickled wild ramps (a member of the onion family) and an everything bagel; and the Liberty Delight Farms striploin, served with petit pois, wild ramp chimichurri and a cumin crust. Summery drinks that debuted in June are Strawberry’s Field, made with Wheatley Vodka, Licor 43, kiwi and strawberry, and Real Ladies Never Blush, made with prosecco, limoncello and pomegranate. 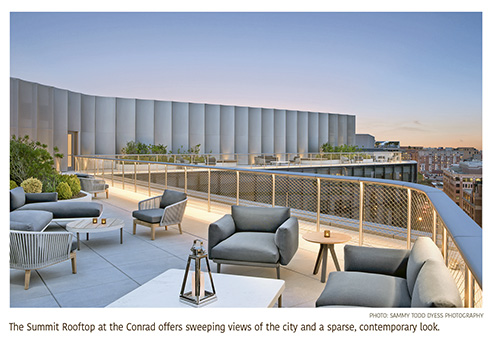 This new modern hotel at the heart of CityCenterDC boasts a rooftop bar and lounge on its 11th floor that offers sweeping views of the city. The space, much like the rest of this contemporary property, is sparse but expansive, giving guests room to breathe, unlike many other cramped city rooftops.

WAVES at the InterContinental Washington D.C. – The Wharf 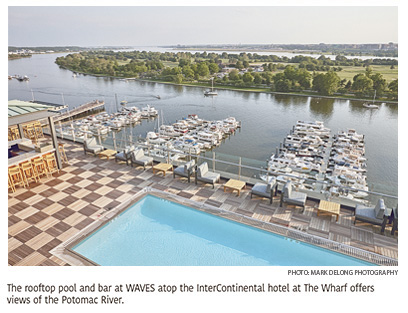 The rooftop pool and bar area are a great perch from which to watch the boats go by on the Potomac River — or to people-watch the crowds heading to a concert at The Anthem or the pedestrians shopping at Wharf destinations such as Politics and Prose Bookstore or A Beautiful Closet, a boutique curated by a former World Bank employee.

This summer, the bar is serving signature cocktails such as the Hibiscus Mule, made with Grey Goose Vodka, lime, hibiscus and ginger beer, and a Mango Gin and Tonic, made with Bombay Sapphire, mango infusion and tonic. Light bites include a lobster roll, tomato watermelon salad and turkey club. On Wednesdays through Sept. 4, the hotel is offering diplomats with valid diplomatic credentials 20 percent off an overnight stay plus 10 percent off food and beverage with reservations at Kith/Kin, the Watering Hole, WAVES and in-room dining.

Maybe the best seat in the house for a Nationals home game is not in the house at all but atop the Hampton Inn & Suites at the Navy Yard. The Top of the Yard looks directly down onto the baseball stadium for those who want to keep an eye on the game, but there’s seating and a firepit for anyone who doesn’t. Also within eyesight: the Capitol Riverfront neighborhood and several monuments. 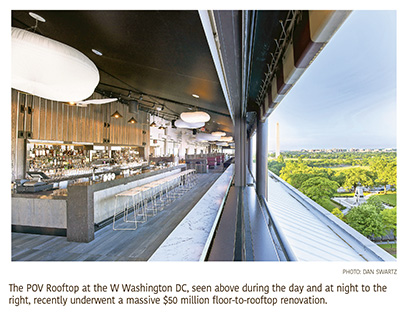 This prime space overlooking the White House reopened in May after a $50 million floor-to-rooftop renovation. Of course, you might want to keep your eyes peeled for more than a presidential sighting. Since POV opened 10 years ago, Leonardo DiCaprio has had tea with Martin Scorsese there, John Legend serenaded Chrissy Teigen and Jamie Foxx grabbed a mic to entertain the crowd. The newly added floor-to-ceiling retractable glass means POV will be open year-round.

The space offers live entertainment such as POV Live, a music series that showcases deejays and other musicians, and What She Said, a global speaker series featuring inspiring female leaders in myriad industries.

It’s worth checking out just for the cocktail names. Draft cocktails include the Cold Brew Covfefe, made with Leopold Bros. Frenchpress Coffee Liqueur, Buzzard Point barrel-aged white rum, tonic, limoncello and espresso. There’s also a throwback to President Obama called Yes We Can, made with basil, honey, kombucha alcoholic tea and lavender bitters. Signature drinks include the Stormy Jack Daniels, Make America Grape Again and Bi-Partisan. Soak up some of that alcohol with a lobster roll — chilled lobster, ginger lime mayo, celery and chives — or surf and turf. 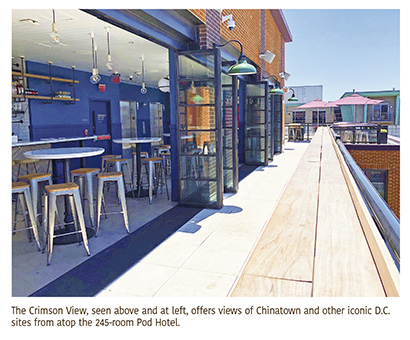 Crimson View at the Pod DC

Take in views of Chinatown and other iconic D.C. sites from atop the 245-room Pod Hotel, which opened in April 2017. In addition to beer and wine, the bar serves signature cocktails such as the Botanical Garden, made with Tanqueray Gin, honey, lemon juice and lavender bitters, and the Chocolate Rose, made with Cruzan aged dark rum, St. Germain, rosewater, Peychaud’s and Aztec cocktail bitters. Snacks include oysters, cheese boards, and chips and dips.

Sky Bar at the Beacon Hotel

Situated in a quiet Dupont Circle neighborhood, this bar offers glimpses of Washington from above, but there’s plenty to see around you, too, in the form of a bar wall that features murals by local artists. Happy hour runs from 5 to 7 p.m. on weekdays, when daily select beers are $5, wines are $6 and cocktails are $7. Signature drinks are The Black Sheep, made with Stoli Vodka or Jack Daniels Whiskey, blackberries, ginger beer and fresh limes, and the Aperol Spritz with Aperol, elderflower liqueur, Rose Brut and blood orange soda. 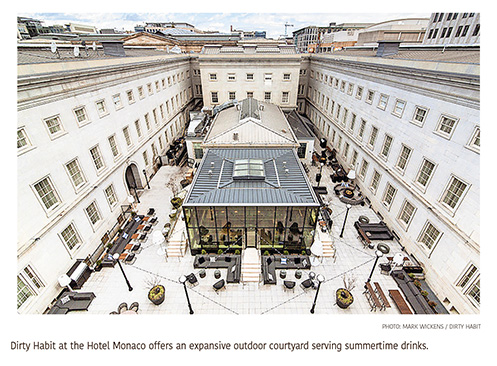 Dirty Habit at the Hotel Monaco

This courtyard, with its own dedicated outdoor bar and fire pits, takes up a whole city block yet feels insulated from the bustle of Penn Quarter right outside. On the menu this summer is Asian street food available daily starting at 4 p.m. on the patio food cart. Choices include Japanese takoyaki filled with octopus, scallions, pickled ginger, bonito flakes, kewpie mayo and Worcestershire sauce, plus Korean short rib yakitori and teriyaki chicken yakitori. More substantial item are also available and include braised pork belly and Chilean sea bass.

Wash all of that down with the Basil Lemontini Slushee, a frozen drink made with basil-infused vodka, prosecco, simple syrup and fresh lemon juice. 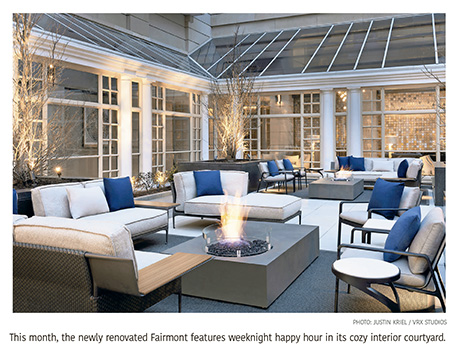 This month, the newly renovated Fairmont near historic Georgetown features weeknight happy hour from 5 to 7 p.m. in its lush, sunlit interior courtyard. Drinks available for half price ($7 to $7.50) include the Moscow mule, margarita, Negroni, and craft gin and tonic. In September, Paella Nights will return in the same time slot. The chef uses a family recipe from his hometown of Barcelona to prepare the Spanish dish with shrimp, chicken, mussels and other ingredients. Manchego cheese, Serrano ham, tortilla de patatas, olives, anchovies and flan de caramel round out the food offerings. Red and white sangria are also available.

Top of the Gate at the Watergate Hotel 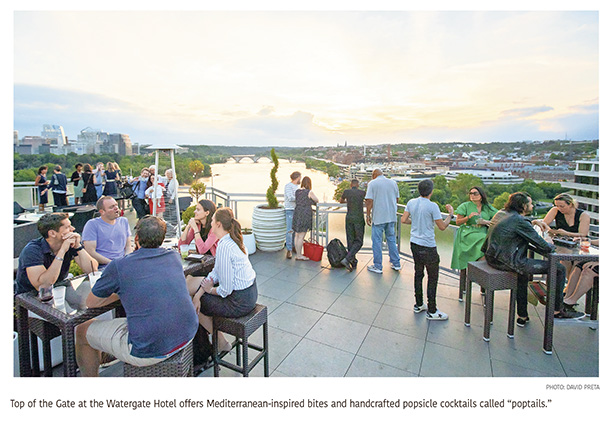 Sit in a space home to Washington history and look at other iconic locations such as the Kennedy Center, Washington Monument and Potomac River. Soak it all in as you sample Mediterranean-inspired bites and sip on handcrafted “poptails,” popsicle cocktails that joined the Watergate menu in May. There’s the pomegranate mojito with Bacardi Rum, mint, soda and a pomegranate popsicle, as well as the Lemon Sparkletini featuring Moët Ice Imperial Champagne, lemon juice and Tito’s Vodka, garnished with a pineapple popsicle. 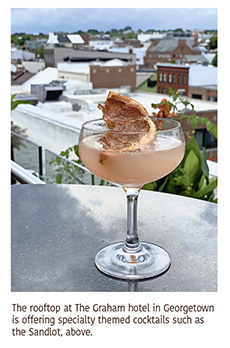 The Rooftop at The Graham Georgetown

The rooftop bar at this boutique seven-story hotel is celebrating the Georgetown Business Improvement District’s Sunset Cinema free movies program on Tuesdays through Aug. 6 with specialty themed cocktails. The Aug. 6 movie is “Eat Pray Love” and the cocktail, called “You’re Wishin’ Too Much, Baby,” is made with cranberry and orange juices, peach schnapps and grapefruit vodka.

Quill at The Jefferson

Quill at this 96-year-old hotel has a seasonal outdoor patio, where guests can grab a drink before or after dinner. Seasonal cocktails include the Heat Wave!, made with Ketel One, watermelon, basil, citrus and soda, and Cruel Summer, made with Ron del Barrilito Rum, Neisson Rhum Agricole, charred pineapple and citrus. Main dishes include grilled king salmon and veal schnitzel, or go light with the Ginger’s Popcorn appetizer, made with Amish honey and candied ginger, or bison sliders in blueberry barbecue sauce.

Locals can turn the visit into a staycation. Through Sept. 2, guests who live within driving distance can call The Jefferson to book a suite and mention the DMV offer to get a complimentary five-course tasting menu for two at Plume, the only D.C. restaurant with Forbes Five Star and Michelin recognition. 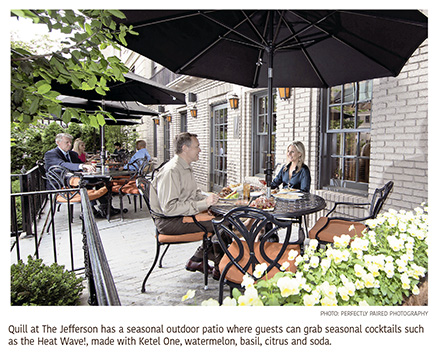 DNV Rooftop at The Donovan

This popular gathering spot features a rotating list of craft cocktails with offerings such as Sunrise in Ha Long Bay made of cognac, cold brew and whipped coconut, as well as Booze in a Stick popsicles with hibiscus mai tai or spiced pina colada flavors.

Refreshing beverages and beer are great, but when it comes to Washington’s oppressing humidity, nothing beats a dip in the pool. The Liaison is home to the city’s largest rooftop pool, so it’s a great outlet for politicos wanting to cool off after a heated day on Capitol Hill. 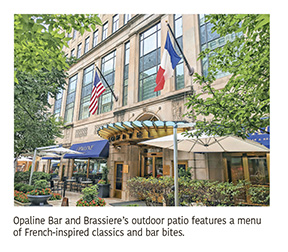 Located at the Sofitel Washington D.C. hotel by Lafayette Square, Opaline’s outdoor patio features a menu of French-inspired classics and bar bites. On weekdays from 4:30 to 6:30 p.m., the restaurant offers its Rosé and Raw Bar, serving glasses of chilled Sofia Brut Rosé and Sofia Rosé for $8 — or get a bucket for $40. Oysters and shrimp are $1 apiece. Bring your four-legged friends, too. The patio is dog-friendly.