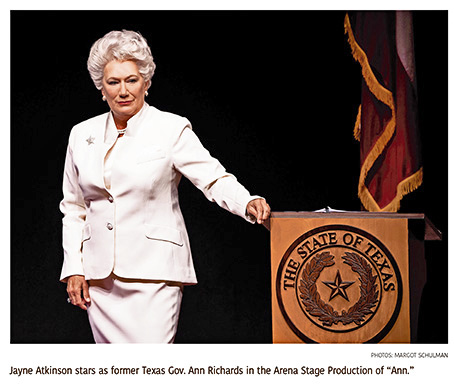 When Holland Taylor’s “Ann” made its debut in San Antonio nearly a decade ago, a reviewer for the Dallas Morning News noted that the “affectionate portrait” of the late Texas Governor Ann Richards was not a political play.

That may well have been true in 2010, and even in 2013, when the show first made its way to Broadway. But it is less true today, when partisan bickering has reached a new low in rhetorical flourish as well as viciousness. And the play — which otherwise might lack the emotional stakes to support its two-hour run time —profits as a result.

On opening night at Arena Stage’s Mead Center for American Theater, the folksy wit for which Richards was famous was newly freighted with ideological heft and the audience supercharged with the energy of a Takoma Park impeachment rally.

Jayne Atkinson stars in what is essentially a one-woman show, although the voice of Richards’s assistant, Nancy Kohler (played by Julie White), can be heard from offstage. It begins with Richards delivering a commencement address in a Texas auditorium, then shifts to the office where she worked as a brash governor before losing to George W. Bush in 1994, with almost all of the dialogue delivered in phone calls to staff members, her grown children and then-President Bill Clinton.

The play is the brainchild of Emmy-winning actress Holland Taylor, who is known for her roles in “Two and a Half Men” and “The Practice” and who was once called “the first vaudeville Gentile we ever saw” by The New Yorker. She brings a feel-good sensibility to her warm and often funny depiction of only the second woman and the last Democrat to serve as the governor of Texas. Richards burst into national prominence with her 1988 keynote address at the Democratic National Convention in which she remarked of then-Vice President George H.W. Bush: “Poor George, he can’t help it; he was born with a silver foot in his mouth.” 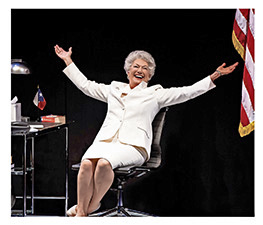 But the script glibly glosses over Richards’ struggle with alcoholism and never treats her micromanagement of her family or bullying of her staff as anything but a gag. After the intermission, the second act never really materializes, as no real conflict mounts, giving the protagonist no opportunity to grow.

Two things make the show work, now that the mourning period for the charming Democrat “with Republican hair” and her clever one-liners is behind us.

The first, of course, is Atkinson’s powerful charisma — which is obscured in the relatively staid TV roles for which she is currently best known, as Secretary of State Catherine Durant in “House of Cards” and as Vice President Teresa Hurst in “Madam Secretary.” Like the woman she portrays, Atkinson’s timing is impeccable, and she masterfully uses the script’s central conceit that the story being recounted is part of a commencement address before a gymnasium filled with graduating seniors to engage with her audience directly.

But it is the unmentioned elephant in the room — President Donald Trump — that makes the story crackle. Through no fault of Taylor’s, who also portrayed Richards in the play’s original ascent from San Antonio to Broadway in its first run, hers was a heroine without a villain. Richards was a woman who broke all the rules, did things her way and beat the good ole boys at their own game. But the lack of a foil made it too easy to forget the rules she didn’t break, especially as she appeared in a one-woman show. 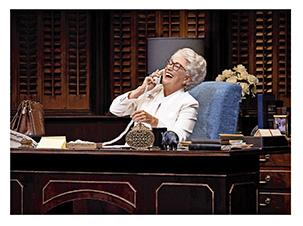 Today, her father’s bawdy jokes (a Great Dane is involved in the one that made the show) play like a tight-wire act, hilariously improper but demeaning to no one. Her send-ups of her Republican foes, as apt as they are excoriating, are good-humored rather than sarcastic or snide. And her all-too evident character flaws are redeemed by interjections of humanity that would simply never occur to a sociopath.

After eviscerating a young staffer who has failed to vet the donor of airline tickets, leaving her stuck covering the $8,000 bill with a personal check, she pages her offstage assistant for the young man’s shoe size so she can include him in the group she’s buying boots for on an upcoming holiday jaunt. And her recurrent soul-searching over whether or not to issue a 30-day stay of execution to a man convicted of raping and murdering a nun makes clear that however much she might love power and the public eye, she never allows herself to lose sight of the reason she sought public office: “Life isn’t fair. But government should be.”

In 2010, no doubt it sounded like an old chestnut. This summer, it feels like a forgotten truth.

Jason Overdorf (jasonoverdorf.com) is a contributing writer for The Washington Diplomat.