Home The Washington Diplomat August 2019 Mural Beneath OAS Tells Fascinating History of the Americas, and its Uruguayan Creator 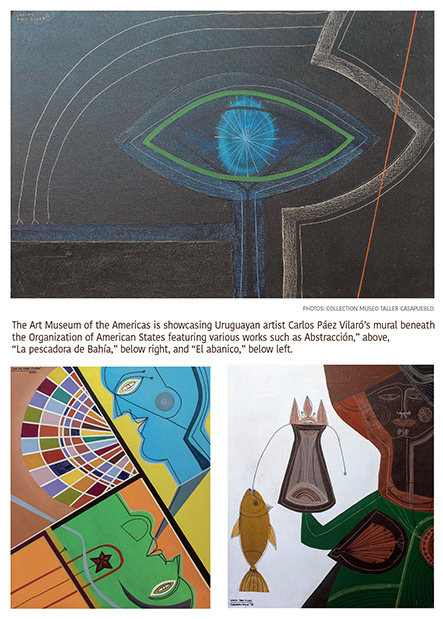 In October 1972, Uruguayan artist Carlos Páez Vilaró’s son was in a deadly airplane crash. The flight carrying a rugby team from Montevideo took off from Carrasco International Airport en route to Santiago, Chile, but it never made it to its destination.

Because of cloud cover and pilot error, the flight crashed in a remote section of the Andes Mountains. More than a quarter of the passengers did not survive the crash, while others later succumbed to the weather and their injuries.

For the next 72 days, the remaining survivors were forced to turn to cannibalism to stay alive. In spite of the seemingly impossible odds, Páez Vilaró remained confident that his son was alive.

“He always thought, ‘My kid is alive, and I’m going to find my kid, and you will see,’” said Adriana Ospina, the collections curator at the Organization of American States Art Museum of the Americas. “And that’s what happened.”

The discovery that his son was among the 16 survivors was a dramatic chapter in the life of a prolific and influential abstract artist who was a renown painter, potter, sculptor, muralist, writer, composer and architect. Páez Vilaró, who died in 2014 at the age of 90, traveled extensively to countries such as Brazil and Senegal, drawing inspiration from myriad cultures. His work has been exhibited in museums, government offices and corporate headquarters around the world.

His son’s near-death experience influenced Páez Vilaró’s writings, which are now on display, along with his artwork, in “Roots of Peace” at the Art Museum of the Americas. The exhibit, which includes two dozen paintings, books and archival material, is named after the 10-section mural he painted in 1960 that encourages unity among the people of the Americas while embracing their differences.

The mural — one of the longest in the world — decorates a tunnel that connects the OAS headquarters with its administrative building two blocks away. As part of the exhibition, it will be open for public tours for the first time since it was painted in 1960.

“Carlos Páez Vilaró is a Uruguayan artist who had a pretty prolific career in many fronts,” Ospina said. “He was a painter. He wrote as well. He was a builder.”

She said he enjoyed a long-term relationship with the OAS and the Art Museum of the Americas and had his first of many exhibitions with the organization in 1958.

The next year, the chief of the OAS visual art unit watched as one of the most famous murals in Uruguay was demolished in a bus station when improvements were being made to the structure. With the fall of one mural, he was inspired to create another.

Ospina said the chief reported back to Páez Vilaró that he had found a wall but could not provide him with any money for supplies or pay him for his work. Páez Vilaró went ahead with the project, finding a sponsor in a Uruguayan paint company that sent him pigments and recruiting help from students at the Corcoran School of the Arts and Design and the University of Maryland.

Ospina said the mural, which is about as long as the Washington Monument is high, was completed in two to three months. Each of the 10 sections connect to the idea of “Pan-Americanism,” emphasizing unity throughout the Western Hemisphere while depicting themes of peace and development in the Americas. Páez Vilaró dedicated the mural to his father, an early supporter of the idea.

The first section of the mural is titled “technical cooperation.” With objects such as a rake, microscope and telescope, it focuses on agricultural and scientific collaboration.

The section also includes the first of numerous abstract images of people throughout the work, which Ospina said highlights Páez Vilaró’s belief in multiculturalism and embracing all races.

“I think it’s the theme of the entire mural, with these profiles of different colors,” she said.

The idea of racial tolerance is personified in the second section, with two people of separate races eating from the same plate. Ospina said pictures of people of different races facing each other is a common theme throughout the mural.

Other sections represent areas in which the people of the Americas can come together, ranging from the protection of natural resources to the promotion of physical health. Ospina noted that fitness was particularly important to Páez Vilaró, who included scenes depicting basketball, tennis and weight-lifting in the mural.

In some of the sections, lines of previous editions of the mural can still be seen. After its completion in 1960, the mural was restored in 1975, in 2002 and earlier this year. The restored version includes newer painting techniques that Páez Vilaró gradually acquired over the years, after the original work was complete.

“This is a totally different vocabulary from the rest of the mural,” Ospina pointed out. “This thin black line — this more curvy line — is something he was doing in the 2000s rather than in the ’70s or ’60s.”

Ospina said the mural needs continuous upkeep because of Foggy Bottom’s location in a former swamp. She said humidity enables water to leak into the mural in an underground hallway, requiring the restorations.

She said the mural was also damaged in the past from people pushing carts through the hallway and scraping it, “not having a real understanding of the importance of the mural.”

Ospina said that a consistent characteristic of Páez Vilaró’s work was the influence of other artists such as Pablo Picasso and widely established symbols such as the wheel and the eye.

“He used universal symbols that are linked to the subject matter of his work,” she said.

“It’s pretty much what he did in his entire career, and he did it through his struggles,” Ospina said. “He traveled around the world. He tried to absorb culture, and I think that’s why it’s always present in his art.”

Jared Gans is an editorial intern for The Washington Diplomat.