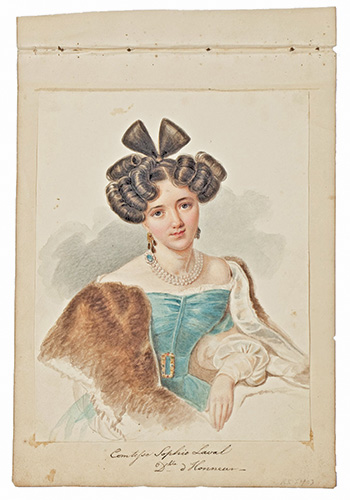 “Friends and Family” features watercolors and heirlooms from the family collection of Henry Middleton, who was posted to Russia as U.S. minister in the 1820s, including portraits of Comtesse Sophie Laval.

In 1820, Henry Middleton traveled from South Carolina to St. Petersburg to take up his new post as minister to Russia. He and his family would stay in the city for a decade as they navigated the social and political intrigues of diplomatic life, all while documenting it through their family album filled with exquisitely detailed watercolor portraits.

A new show at Hillwood Estate, Museum & Gardens shines a light on this exciting time in U.S. foreign relations history through the Middleton family’s collection of 45 watercolor and gouache portraits of those they met during their time abroad. This marks the first time the album has been publicly presented in its entirety, and the exhibition showcases the delicate portraits alongside various souvenirs and fashion items from the period.

“Friends and Fashion: An American Diplomat in 1820s Russia” is perfectly situated on the Hillwood grounds in the Dacha, an authentic Russian country house built in 1969 by socialite, cereal heiress and Russian art collector Marjorie Merriweather Post. The small but compelling exhibition inside offers a window into one family’s foray into 19th-century diplomatic life while also laying out the larger historical context in which they operated — a time that notably featured the death and funeral of Emperor Alexander I, the Decembrist revolt and the coronation of Emperor Nicholas I.

The exhibit also focuses on the social aspects of diplomacy. The people the Middleton family encountered during their St. Petersburg years are rendered in meticulous watercolor portraits, with great concern given to depicting the individuality of the subject in their expression and attire. These portraits capture the fashions and trends of the day, with many of the women wearing dramatic, puffed skirts and sleeves, corseted waists, elaborate hairstyles and hourglass silhouettes that reflect the emerging romantic era.

Daughter Eleanor’s social diary also paints a detailed picture of the family’s life in St. Petersburg, along with letters that Henry’s wife Mary Helen wrote to her younger children left in the care of family in England. The writings include meticulous descriptions of the array of sumptuous balls, banquets, receptions and parades that the family attended, as well as their visits to St. Petersburg’s gardens, palaces and parks.

The response of the D.C. diplomatic community to the exhibition has shown that in many ways, the profession has changed little since the years documented in “Friends and Fashion,” curator Angie Dodson told The Washington Diplomat.

“Their message to me about their takeaway from the exhibition has been that the more things change, the more they stay the same,” she said, noting that it has been interesting “for them to look at what diplomacy looked like in the 1820s in Russia and see their own experience in that.”

One aspect that has sparked questions from visitors connected with the diplomatic world is why Henry Middleton was a minister and not an ambassador to Russia. 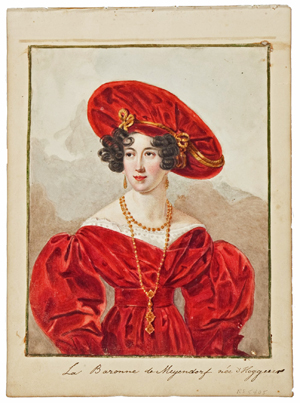 Dodson explained that Middleton held the lower-level post because the United States was still a very young nation at the time and did not “have that kind of standing on the international scene just yet.

She added: “The leader of the free world having to remember our humble roots before we attained the position of power that we have today — that’s been a subject of fascination for our retired diplomats and the active diplomats who are posted here now who have visited.”

The portraits on display are strikingly intimate and personal, and the exhibition provides historical context to build out the very vivid world in which the sitters lived.

Two of the portraits from the family album are by painter Pyotr Sokolov, while the artists of the remaining 43 paintings are unknown. According to the Middleton family, it has long been thought that the oldest daughter, Maria Henrietta, painted many of the portraits and research conducted for the exhibition suggests this is a reasonable assumption.

The first section of the show is largely concerned with setting the diplomatic scene in St. Petersburg and the broader landscape that foreign policy professionals were experiencing in 19th-century Europe and Russia, while the second half turns its attention to the fashion and hairstyles of the day, with accessories and examples of men’s and women’s attire on display.

A tour of “Friends and Fashion” is not complete without also popping into the larger museum at Hillwood, home to Post’s impressive collection of Russian art. As Dodson said, the Middleton album allows visitors to “relish the real strengths of our collection.” There are a number of connections from the album’s pages and the art in the mansion, such as objects from the defeat of Napoleon or items related to the tsars who were in power while the Middletons lived in St. Petersburg.

This exhibition gives a glimpse into the vibrant world of 19th-century diplomatic St. Petersburg, allowing museumgoers the chance to come face to face with some of the people at the heart of early U.S. foreign relations. Coming at a moment when relations between Russia and the U.S. are especially fraught, the exhibit offers a fascinating glimpse into a very different era of diplomacy.

“I love the way that the portraits shine,” Dodson said. “When you’re dealing with really intimate material, you always worry if it’s going to hold its place in the gallery or if it’s going to be somehow dwarfed. And I think these 45 portraits, each in and of itself, is a very powerful work of art. I think they do hold their real estate on the wall.”

Friends and Fashion: An American Diplomat in 1820s Russia