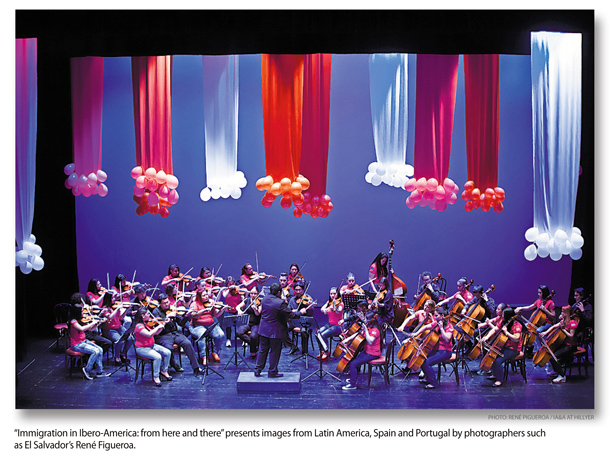 A photography exhibition at Hillyer Art Space (now known as IA&A at Hillyer) tracing the impact of immigration on Ibero-American countries highlights the varied and unexpected ways migrants and refugees both influence and adapt to their adopted homes.

With images selected by the individual embassies of Latin America, Portugal and Spain, “Immigration in Ibero-America: from here and there” represents each country’s respective take on the immigrant experience.

The exhibition highlights a timely global issue that has been taking center stage in the U.S. and Europe, but does so by shining a spotlight on nations that have also been hugely shaped by immigration but don’t receive the same headlines as, say, the refugee crisis in Europe or the debate over President Trump’s promise to build a wall with Mexico.

It makes for a varied addition to the selection of exhibitions on display in connection with FotoWeekDC, a citywide photography festival that marked its 10th anniversary this year. The former residence of the ambassadors of Spain served as the home-base for FotoWeekDC 2017, which featured over 150 shows spread throughout D.C. by both local and international artists.

“Immigration, an inescapable, painful and at the same time hopeful path, is a fundamental axis in the history of people. In this fusion of customs, codes, cultures, lies the very essence of the communities,” the exhibition notes in its introduction. “Ibero-America does not escape this continuous and permanent coming and going of migrants in search of new horizons; in some cases fleeing persecutions; in others escaping from hunger and misery; or simply pursuing dreams of love, freedom, peace.”

Maria Laura Reos, the curator with the IberoAmerican Cultural Attachés Association (AACIA), told The Washington Diplomat that she worked extensively with each embassy to help select a photograph that would speak to a “positive” aspect of immigration and its impact on individuals, culture and the nation at large. It was at times a “difficult” task, she noted, asking each cultural office to distill such a broad concept down to just one image for display in the show.

“We wanted the show to explore the impact of immigration, through the lens of each embassy’s selection,” she said.

AACIA is a D.C.-based nonprofit organization created by the embassies of Latin America, Portugal and Spain to promote Ibero-American heritage and culture to the area.

A favorite of Reos’s is the image of an Argentine cowboy, known as a gaucho. An Argentine herself, she said she had been surprised by the history of immigration behind the national symbol. In photographer Marcos Furer’s “Elegancia,” skilled horsemen take their galloping horses through a field, creating a vibrant black-and-white scene.

This is the most striking photograph in the exhibition, hinting at the influence of Spanish immigrants in gaucho culture as the viewer is absorbed in the movement of both horse and rider. 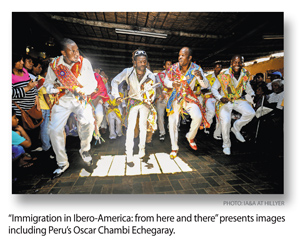 Stories are at the heart of the show, with every piece offering a wealth of details in the description about both the image and the country’s respective history of immigration.

“This is an exhibition where you should read the text,” Reos said. “Each one tells a story.”

While some of the exhibition text focuses on giving visitors the broad strokes through the nation’s history, several hone in on individual tales, like that of photographer Jorge Alba’s “Continuidad” for Colombia. It shares the immigration story of Master Lui Qingxun, who traveled to Colombia 22 years ago for a cultural exchange and decided to stay on.

“He studied American literature but mainly focused on the practice of Tai Chi Chuan, a Chinese martial art. Today, people of all ages travel to Parque Virrey in the north of Bogota to practice this martial art farm,” the display text reads.

Brazil’s entry, Carlos Augusto Waldrich’s “Alemanha Brasileira,” shows the Castelinho Moellmann, a copy of the Michelstadt city hall in southern Germany that is located in the Brazilian city of Blumenau. As the caption notes, German immigration started before Brazil’s independence in 1822, resulting in a “German-Brazilian population that integrated into Brazil’s reality without denying their original culture.” The photograph, notably, is a compilation of 70 pictures taken by drone, making for both a surprising subject and technique on display.

The 14 images in the show range from landscapes to intimate portraits, but the cohesive thread zeroing in on the positive aspects of immigration runs through each piece. It is a simple yet surprising exhibition that explores immigration beyond the headlines.

Taking visitors on a whirlwind tour through the Ibero-American countries, this photography exhibition revels in showcasing the fascinating ways that immigration has profoundly shaped individuals and societies.

As the exhibition text states, “Each of these images shows the transformations of a society that evolves from the arrival of new cultures and customs. Perhaps the best face of immigration allows growth, integration and the idea of a peaceful world capable of accepting others without resentment, bitterness or distrust. In this diversity of spaces and sensibilities that is Ibero-America, photography becomes a testimony of the essential.”

Also as part of FotoWeekDC, Hillyer is hosting “Land That We Love,” a series of photographs and videos by Lloyd Kofi Foster highlighting the self-taught Ghanaian-American photographer’s experiences in the West African country of Sierra Leone.

Hillyer is a contemporary art gallery established in 2006 to raise awareness of under-represented artists, both emerging and established, who have not had a major solo exhibition within the last three years. Hillyer is a program of International Arts & Artists (IA&A), a nonprofit dedicated to increasing cross-cultural understanding and exposure to the arts internationally.

Immigration in Ibero-America: from here and there